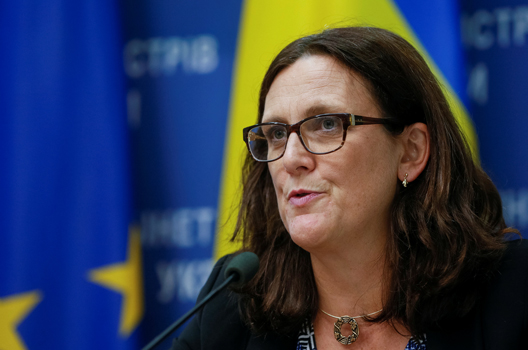 US President Donald J. Trump’s imposition of tariffs on steel and aluminum imports into the United States has been a significant blow to the US-European Union (EU) economic partnership, but this episode also offers a real opportunity.

Though the EU has been exempted from penalties until May 1, the mere prospect of future tariffs has caused considerable angst in Europe and in transatlantic business circles. However, the Trump administration clearly expects countries to bargain for a continuation of exemptions. As part of a deal to make the exemption permanent, the EU and the United States should enter into new negotiations for a free trade agreement that will respond to the economic concerns of the Trump administration while also providing the EU with some important gains.

Trade negotiations offer the only real way for Europe to address the Trump administration’s concerns about the trade surplus in goods across the Atlantic. If Trump and his advisers are serious about tackling this surplus, they must engage with Europe, not arbitrarily slap tariffs on European steel products in a way that will raise barriers and harm the US economy.

EU leaders must come to terms with the new realities of Washington. For those who have long supported a US-EU trade agreement, the European reaction to the steel tariffs has been both predictable and understandable. It may be that EU’s threats of retaliation with similar tariffs on US exports bought a bit of extra time for negotiations by encouraging the Trump administration to allow a temporary exemption for the EU.

It is laudable that EU Trade Commissioner Cecilia Malmström and other EU leaders have strongly defended the liberal international trading order, and bizarre that this concept now seems so foreign to a US administration. Since the cessation of talks toward the Transatlantic Trade and Investment Partnership (TTIP) shortly before Trump took office, the EU has actively sought to conclude trade agreements with Japan, the South American trade bloc Mercosur, and others, claiming a role for Europe as the champion of international trade. Of course, this strategy is not altruistic. It will allow Brussels to extend the market for European products, along with the reach of European regulations, around the world, a strategy the Trump administration should not ignore.

However, if Europe does not want to end up in a series of destructive trade spats with the United States, it needs to abandon this righteous stance—however deserved—and figure out how it will advance its agenda with Trump.  Some will say this is giving into a bully. Perhaps it is, but in the end, Europe will benefit from a reduction in trade barriers across the Atlantic, even if negotiations are launched under difficult conditions. Further, Europe will certainly benefit if greater EU engagement with Washington—even if superficially on Trump’s terms—leads to a less suspicious attitude in Washington. It would be undeniably helpful for the relationship if Trump did not always claim that the United States has been treated “very badly” by the EU.

Any new negotiations should not simply be a restart of the TTIP negotiations. The outstanding feature of that accord was the prospect of regulatory convergence, rather than any reduction in tariffs. The Trump administration’s fixation on trade in goods means that market access will now be the priority, and the administration will inevitably focus on reducing EU tariffs on automobile imports from the United States.

TTIP negotiators had already made a great deal of progress toward reducing the tariffs and quotas that hinder transatlantic trade before negotiations ceased. Consolidating those gains and combining them with a reduction in EU car tariffs and a permanent exemption for the EU from the steel and aluminum tariffs could be the basis of a deal.

If the EU needs a sweeter pot, it could look to investor protection, as the Trump administration is on record challenging the established investor state dispute settlement (ISDS) under the North American Free Trade Agreement (NAFTA). Or perhaps this is the time for Europe to push for an agreement on geographical indicators, including the names of wines and cheeses; after all, who understands the value of a brand better than Trump?

Many in Europe hesitate to enter negotiations with the unpredictable US administration. However, unless they want to stand apart from the United States for the next three to eight years, Europe—and the EU specifically—needs to engage. There will be ups and downs in the negotiations, many more than in normal trade talks, as we have seen with NAFTA. Yet the EU offers something special for Trump: a deal that will create the biggest, most important trading entity on the planet, one that generates $5.5 trillion in sales per year.

The United States should grant the EU an exemption from the steel and aluminum tariffs, which would become permanent upon conclusion of a deal (which would probably be concluded long before any process at the World Trade Organization, where the European Union is seeking compensation from the United States for the tariffs). The EU should agree to put automobile tariffs on the table for negotiation, and the United States should do the same with light trucks; ideally this could become a zero-tariffs accord. A bilateral working group could identify other areas to include in a trade agreement. Measures to make trade easier for small and medium enterprises on both sides of the Atlantic could resonate among those—including the president’s supporters—who believe international trade only benefits major corporations. Ultimately, whatever is included in the negotiations, one thing is clear: a trade deal between the United States and the EU would be huge.

Frances G. Burwell is a distinguished fellow at the Atlantic Council and a senior adviser at McLarty Associates. You can follow her on Twitter @FranBurwell.