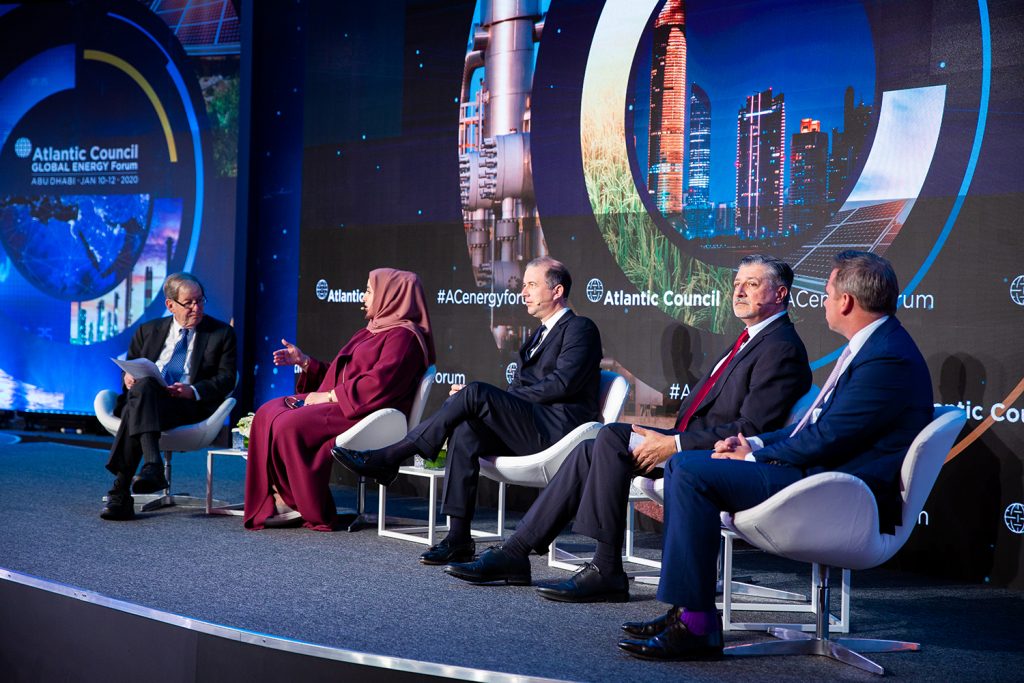 The global surge in gas production has thrown into question the role this crucial energy source will play in the future energy mix, as the world community looks to limit carbon emissions and combat global climate change.

“There are some who believe that gas should play no role in the global energy mix,” Ambassador Richard Morningstar, founding chairman of the Atlantic Council’s Global Energy Center, said at the introduction of a panel on the future of gas at the Atlantic Council’s Global Energy Forum hosted in Abu Dhabi, United Arab Emirates on January 12, 2020. At the other end of the spectrum, he added, some have “called gas a destination fuel that provides a clean baseload energy needed for the developed world to grow.”

The experts Morningstar talked to on January 12 seemed to agree that the key future role for gas will be somewhere between these two visions. ADNOC LNG Chief Executive Officer Fatima Al Nuaimi noted that “a couple of years ago, nobody raised this question. It was a given…that natural gas and liquefied natural gas (LNG) as the cleanest of the fossil fuels is an integrated part of the future energy mix.” At the same time, she conceded, “there is a responsibility on the industry to address…that there are some emissions happening because of the burning of gas,” and gas will have to work hand in hand with renewable energy to achieve the optimal energy mix for the future.

Marco Alverà, chief executive officer of Snam S.p.A., argued that the focus of gas right now should be to decrease the continued global use of coal, the most dangerous fossil fuel for CO2 emissions. “Switching today’s coal [use] into gas would save 6 billion tons of CO2,” he explained, making it critical that natural gas and LNG become cheaper and easier to consume in areas that continue to use coal, such as Asia. “The effort has to be to compress the cost of infrastructure liquefication, get natural gas into the coal consuming countries at a price point which makes a switch happen the same way it happened in gas producing countries like the United States,” Alverà said.

According to Venture Global LNG Chief Commercial Officer Tom Earl, the transition to gas is already well underway in some of the top coal consuming countries. “There is not a single existing regasification terminal in China that is not being expanded today and that is not to speak of the new terminals they are [also] building,” he explained. He added that significant progress has also been made in southeast Asia and Brazil, and India has made several initial steps towards increasing its ability to import gas. Earl agreed with Alverà that “one of the first jobs of gas is to improve its competitiveness to take the place as much as possible of coal.”

While gas can be an important new source of energy for those who are still consuming coal, Adnan Amin, a distinguished fellow in the Atlantic Council’s Global Energy Center, argued that gas’s importance in the future could be overstated. “There is an inevitability about bridges; sooner or later you get to the end of the bridge,” he said, pointing out that renewable energy technologies have “decreased in cost by about 80 percent in the last decade” and now “clean energy portfolios are competing with new gas.” He argued that “if we are going to decarbonize, we need to address how all hydrocarbon sources can be used more efficiently and less in the future.”

Still, Amin admitted that getting to “100 percent renewables…is completely a fool’s paradise” and that gas will still have an important role to play. “There is going to be a mix,” he said, and “we need to ensure that that is an optimal mix.” Al Nuaimi argued that gas can provide a critical backstop to renewable energy, as gas “is a source of energy that does not rely on the days of the month where the wind is blowing and the sun is shining.” Adequate storage remains a key challenge for renewables to overcome, Alverà added, as “what you can achieve in California and Australia with batteries you cannot achieve in other parts of the world.” Additionally, countries and areas that do not have copious solar or wind resources will continue to rely on gas, according to Alvera, as countries should not “kid ourselves that you can transport energy over long distances,” without considerable loss.

Although Amin pushed back that significant technological progress has been made on both the storage and transportation questions, especially in China where the government has invested a lot of money into new renewable technologies, he agreed that gas will continue to play a role for those who cannot access renewable energy sources and even in places that depend mainly on renewable production, such as rural Africa, where solar panels can provide electricity, but “replacing firewood and coal for cooking” with gas “will be critical” to reducing emissions.

Technology could also make a transition from gas to renewable energies easier, Alverà explained, as new technology could “produce green hydrogen from renewables in the next five years.” Hydrogen “behaves like natural gas,” he said, but “has the beauty that it can be produced by electricity.” If technology can perfect the process of creating hydrogen from solar, wind, or hydroelectric power, “we can turn the gas pipelines into essence free storage” for the green hydrogen, which would be perhaps ten times cheaper to store than green electricity.

The panelists all agreed that there will not be a one-size-fits-all solution for every country’s energy mix. Renewables and gas will likely have to work together to achieve the ambitious decarbonization efforts needed to combat climate change. Technology, cost, and changes to demand will all be critical factors in determining the future of gas, either as a key bedrock of the future energy mix, or a bridge to increased reliance on renewable energies.

Despite rising renewable energy generation, South and South East Asia will continue to look at major investments in new gas import infrastructure to displace more carbon-intensive fuels, as the region races to meet its development ambitions.