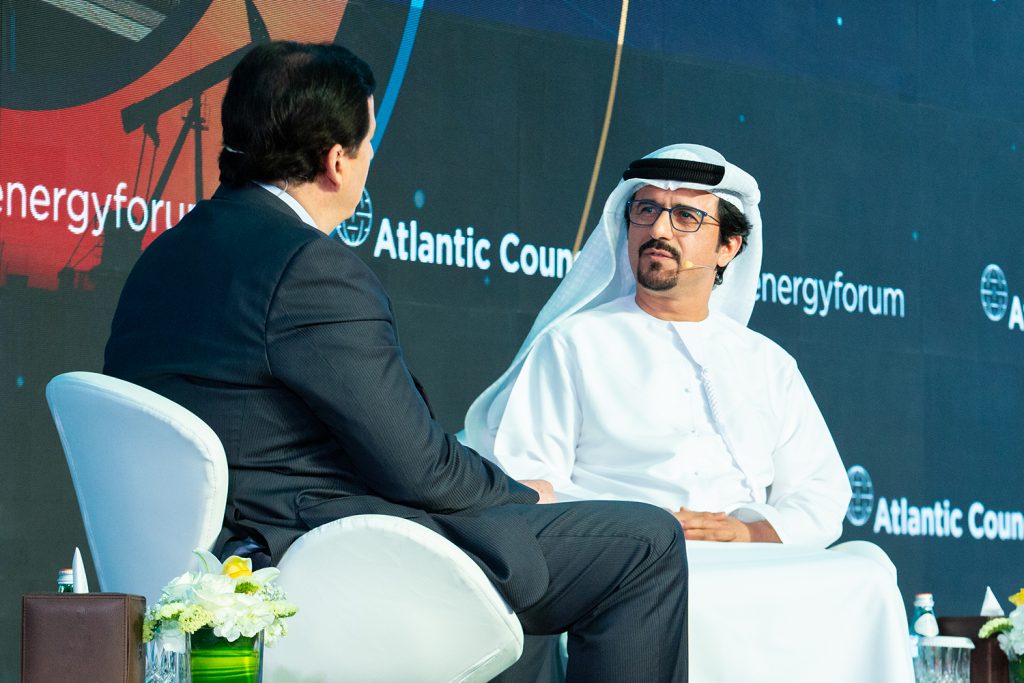 As citizenries and governments around the world become more concerned about the onset of global climate change and prioritize reducing carbon emissions, traditional oil and gas companies are beginning to make significant changes to their business model to navigate the new energy transition. “There is no thing that is a magic solution” to climate change, according to Musabbeh Al-Kaabi, chief executive officer for petroleum and petrochemicals at the Mubadala Investment Company, but oil and gas companies are increasingly realizing that “the future outlook for energy consumption will require different sources of energy.”

Speaking at the Atlantic Council Global Energy Forum in Abu Dhabi, hosted as part of Abu Dhabi sustainability week, Al-Kaabi explained that Mubadala, a sovereign wealth fund in the United Arab Emirates, “acknowledge[s] the energy transition ahead of us,” and the “need to position Mubadala and Abu Dhabi on the right track to remain a reliable supplier of energy in the future.” Mubadala is achieving this, he said, through prioritizing investment in renewable energy and natural gas, which he argued is key for replacing coal, one of the worst energy sources for carbon emissions and whose demand continues to grow despite global efforts. Al-Kaabi reported that Mubadala is heavily investing into the development of renewables through its subsidiary Masdar, as well as piloting a new natural gas discovery in Asia, a region that is still heavily dependent on coal to meet its growing energy demand.

Oil and gas companies must also devote resources to driving innovation that can help minimize the carbon impact of traditional oil and natural gas production, Al-Kaabi argued. “[Being] a responsible investor means that we need to pay attention to emerging technologies that would [help] eradicate CO2 emissions,” he explained, including carbon capture. Much of this investment can be done through venture capital, Majid Mufti, chief executive office of Saudi Aramco’s energy ventures arm, said. Oil and gas companies have a particular advantage with venture capital, he explained, because they not only bring substantial capital to new start ups but also have the “ability to pilot and deploy those technologies into [their] own operations.” Mufti reported that over half of the companies Saudi Aramco has invested in have seen technology piloted or deployed by Saudi Aramco, including in key sectors such as carbon capture, hydrogen, recycling, and renewables. When Al-Kaabi was asked by CNN International Business Emerging Markets Editor and Anchor John Defterios whether innovation can really be relied on to help solve climate change, Al Kaabi responded that “there is one thing that has never let me down: technology.”

In addition to investing in new technology and alternative sources of energy, oil and gas companies need to have their eyes on how they can limit the potential impact their own traditional operations are having on the environment. “The base business needs to be decarbonized,” Chevron Corporation’s President of Technology Ventures Dr. Barbara Burger said. She reported that at Chevron, “we’ve set commitments for [decarbonization] for both oil and gas, carbon intensity, and methane reduction, and our compensation from the CEO on down to every employee in Chevron is dependent on that.”

Anatol Feygin, executive vice president and chief commercial officer of Cheniere Energy, Inc., agreed, saying that it is important to look not only at the impact of central operations, but the whole network of suppliers and infrastructure that oil and gas companies employ to extract and distribute their products. “The single biggest we can have [on decarbonization] is working with the supply chain and that is something that Cheniere is working on,” he explained. Although many of these partner companies are small, he said that most of them embrace these efforts as they understand that “the best way for the marketing of those [energy] molecules is to show how environmentally sound those processes are.”

The efforts by oil and gas companies to decrease their carbon footprints and develop stronger markets for renewable energy are important, Atlantic Council Senior Fellow and Managing Director of Eurasia Group’s Global Energy and Natural Resources Dr. Robert Johnston argued, because governments around the world have so far been reluctant to pass significant measures forcing producers and consumers to transition away from carbon-intensive energy sources. “Voters want action on climate change, but they don’t want to pay for it,” he explained. Investors, however, have provided their own impetus to this transition by embracing the Environmental, Social, and Governance Criteria (ESG) that prioritize investment into companies that adhere to specific environmental standards. Because investors are screening for the companies that lead on decarbonization, many energy firms are going far above and beyond what governments are currently mandating.

Perhaps most importantly, however, the desire to lead on the energy transition is coming from within many energy companies, Burger said. “Our employees are pushing us as hard as the public is,” she explained. Johnston agreed, saying that energy companies are also in a race to attract the best young talent by performing on decarbonization. “Younger workers, skilled workers, have a choice of where to go.”

With continued attention from global energy companies, Al-Kaabi was confident that climate change could be successfully limited and that energy companies can lead a healthy energy transition that helps protect the environment and provides reliable energy supply across the world. “It will require a collective effort,” he warned, but “there is a list of many emerging trends and technologies that need everyone’s commitment.” By embracing all of the potential solutions, the energy industry can “help eradicate CO2 emissions and help fix climate change in the long term.”

Throughout 2019, financial markets have watched the planned Saudi Aramco initial public offering (IPO), which was finally launched in December. A quieter, but no less significant, story was the Saudi oil company’s acquisition of SABIC. Saudi Aramco strove to have a successful IPO, especially through increased transparency and diversification, and the SABIC acquisition was a key element of Saudi oil company’s diversification strategy. Going forward, what does the merger mean for both companies, what is the new relationship between Saudi Aramco and SABIC, and what are the merger’s implications for the intricate relationship between the various bureaucracies and leadership in Saudi Arabia?