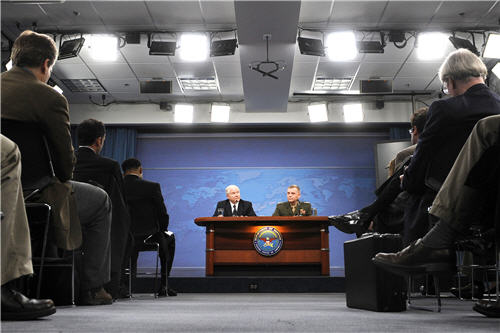 To bolster the Afghan war effort, he would spend $2 billion more on intelligence and surveillance programs to track insurgents and $500 million to field more helicopters and an additional 2,800 Special Operations personnel focused on counterterrorism. The $534 billion plan represents a $20 billion increase over 2009.

Among the weapons taking the biggest hits are the Navy’s DDG 1000 destroyer, a stealthy ship whose cost has ballooned over the past decade. The Navy will purchase only three of the advanced ships and then revert to building the Arleigh Burke-class destroyers that have been a mainstay of the fleet for years.

The Pentagon proposal also would dramatically cut back the Army’s ambitious Future Combat Systems program, which consists of a network of advanced vehicles, unmanned surveillance aircraft and battlefield sensors. Specifically, Gates said that he is canceling the $87 billion in the program set aside to develop a new generation of light armored vehicles that were meant to replace Bradley Fighting Vehicles and 72-ton tanks. These advanced vehicles, which have been in development for almost a decade, were supposed to rely on better surveillance technology to compensate for their lack of armor.

What Does It All Mean?

CNAS’ Andrew Exum live blogged the speech, offering pithy commentary on a moment-by-moment basis.  Others waited until the speech was over to offer reactions.

Center for American Progress fellow Matthew Yglesias, originally a skeptic of Obama’s keeping Gates on the grounds that “It’s desperately important for the Democratic Party’s leaders to avoid re-enforcing the idea that Democrats can’t run national security,” concedes that “This is the move that justifies the decision to keep Robert Gates on at the Pentagon. Any new Defense Secretary, no matter how brilliant, would have had to have spent his first three months in office building relationships with the top military commanders and focusing on filling out the DOD civilian staff. Only a Secretary who’s already been in office could have the ability to propose sweeping change.” Farley goes even further, observing “Obama didn’t believe that such cuts would be possible under a Democratic secretary.”

Hoover Institution fellow Kori Schake argues that “Gates’s emphasis on institutionalizing counterinsurgency sounds remarkably like fighting the last war, and too little effort has been directed toward redressing those vulnerabilities in U.S. military power most likely to produce losses in future wars.”

CDI’s Winslow Wheeler contends that the cuts in weapons systems is overshadowing the lack of institutional change inherent in the new priorities and that the bottom line will be “business as usual.”

Nor does Gates’s announcement reorder defense spending away from occupations in foreign lands (the advocates call it “counterinsurgency”) or change the fact that the United States will continue to spend most of its defense budget on forms of conventional warfare most reminiscent of the mid-20th century. To fight the indistinct, unspecified conflicts that the United States may face in the foreseeable future, neither the strategy nor the hardware has changed.

For example, the Army can now expect a choice between 30-year-old heavily armored vehicles or new but inadequately armored Strykers and MRAPs. Some in the Navy is puzzled over the continued budgetary fixation with aircraft carriers when what’s needed is an effective design of an affordable frigate, or littoral combat ship.

National Security Network deputy policy director Max Bermann disagrees, seeing the budget proposal as “a clear indication that the Obama administration is serious about finally shedding the legacy of the Cold War and building a military that is suitable for the 21st century.”  In particular, he sees the emphasis toward COIN as an unalloyed good, reversing the shift towards the high tech, low manpower of the Rumsfeld “transformation.”  He contends that, “even if our forces are called upon to undertake a conventional fight, our forces will still likely have to engage in stability and COIN operations following any successful conventional operation. Investing more in stability and COIN is therefore about making the military more balanced so that our forces can engage in the entire spectrum of operations, not just conventional operations.”

Michael Cohen of the New America Foundation sees this as “a pretty damn good step in the right direction,” citing both “long overdue cuts in outdated and overpriced defense systems” and the move to replace private contractors with government employees.

Defense Tech’s Christian Lowe lauds Gates for recognizing that “every defense dollar spent to over-insure against a remote or diminishing risk . . . is a dollar not available to take care of our people, reset the force, win the wars we are in, and improve capabilities in areas where we are under invested and potentially vulnerable.” At the same time, however, he worries that even objectively obvious cuts like the Army’s Future Combat System can backfire, ending a useful “technology demonstrator” and kill a “great R&D program that can spin off into the current force and press the technological limits to better inform decisions when it’s time to build replacement vehicles.”

That’s a decidedly minority view among defense policy wonks but one that’s likely to be echoed where it most matters, on Capitol Hill.   As Wired‘s Noah Schachtman notes, with powerful Republicans like Jim Inhofe and even top Democrats — including House Armed Services Committee Chair Ike Skelton, already pushing back on some of the proposals. Slate‘s Fred Kaplan calls it “remarkable” but agrees that these proposals “budget will not go down easily in the Pentagon or in Congress.”

The F-22, the DDG-1000, and the Future Combat Systems are the favored systems by much of the Air Force, Navy, and Army brass, respectively. (It may not be coincidence that he’s going after all three services equally; at least he can’t be accused of chumming up with one at the expense of the others.) The F-22 in particular is also a favorite of many legislators—the result of politically shrewd subcontracting that spread out production of the plane to key districts in 46 states.

My graduate mentor, Don Snow, drummed into me that “policy is what gets funded.”  Presidents and cabinet secretaries frequently announce priorities that people mistake for policy but, unless said priorities are reflected in the budget, they’re just talk.

This is definitely a move in the right direction although, frankly, not nearly enough of one.  Given that this is an opening bid in what is likely to be a very contentious debate, one would think much more drastic reforms would have been warranted. Congressmen whose districts make these systems could reasonably argue that this is precisely the sort of stimulus the economy needs right now.  It’s going to be very difficult to get these cuts through, especially with the sunk costs in FCS.

Even beyond the tactics of negotiating this through Congress, the proposed moves are a baby step. Cutting FCS makes sense, certainly, but only mothballing only one carrier group?  There are those who argue that carriers have been outmoded since roughly the Battle of Midway.  Do we really need 10 of them?