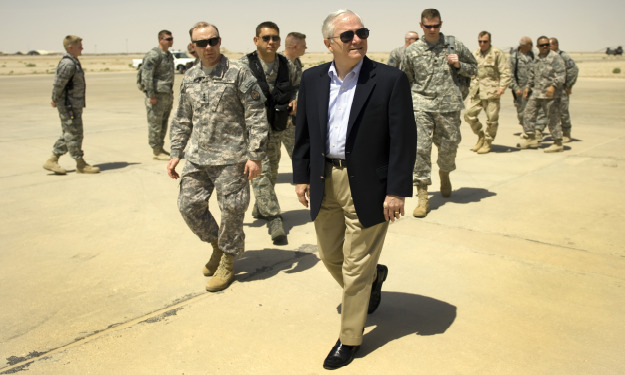 Robert Gates has been a reluctant Secretary of Defense, being coaxed out of the cushy presidency of Texas A&M by President Bush and talked into staying by President Obama.  But his impact on the Pentagon has been tremendous.

On why Gates stayed on after the election, despite an intense dislike for Washington and a strong desire to retire to his lakeside home:

"I really didn’t want to be asked," he said. But, he added, that was because all along he knew "that if I were asked, I would say, ‘Yes.’ In the middle of two wars, kids out there getting hurt and dying, there was no way that I was going to say, ‘No.’"

Gates is a paradox in another sense: A self-described protector of institutions, he has also, in less than four years on the job, changed the way the Pentagon does business and the military fights wars more than any defense secretary since Robert McNamara.

But there’s a haunting dimension to this comparison. In his first two-and-a-half years running the Pentagon for President John F. Kennedy, McNamara brought rational analysis to weapons procurement and shifted military planning from "massive retaliation" (with an emphasis on nuclear bombs) to "flexible response" (and a buildup of conventional defenses in Europe). Yet this side of his tenure is completely overshadowed by the disaster in Vietnam.

Only somewhat less dramatically, Gates has heralded a shift in military planning from the "major combat operations" anticipated in the Cold War to the "asymmetrical conflicts" against insurgents and rogue states that plague the 21st-century world. Yet Gates, too, understands that his legacy will be shaped much more by the outcome of the wars in Afghanistan and Iraq — wars that he did not initiate, and occasionally had doubts about continuing, but which he now undoubtedly and unhesitantly owns.

Gates had spent most of his life in the classified cloisters of the government as a Russia specialist in the CIA, rising from junior analyst to director in some of the darkest days of the Cold War, with a stint as deputy national security advisor in the White House of Bush’s father. But he’d never worked at the Pentagon. Because he arrived with little time and a narrow mission, he felt no need or obligation to play the role of steward. He looked around as an inside-outsider, and he was appalled by what he saw.

U.S. troops were fighting and dying in two foreign wars, but the Pentagon bureaucracy was shuffling through its peacetime paces. The Army and the Marines, for example, had a new armored vehicle, the MRAP, which could provide greater protection against Iraqi roadside bombs and save many troops’ lives. But the brass were doing nothing to accelerate production. Similarly, the Air Force had a new generation of unmanned aerial vehicles, "drones" equipped with real-time video cameras and remote-control-fired missiles; troops in the field were clamoring for more, but Air Force leaders were not stepping up deployment.

Gates quickly intervened, taking both programs outside normal channels. He added $16 billion to build more MRAPs on a crash schedule. And he fired the Air Force’s chief of staff, Gen T. Michael Moseley, in part for negligence with the nuclear command, but mainly, according to knowledgeable officials, for his sluggishness on the drones. Gates replaced him with Gen. Norton Schwartz, head of the Air Force’s unglamorous Transportation Command. He picked Schwartz because he had tirelessly worked out a way, at Gates’s request, to speed the air delivery of MRAPs to Iraq; that is, he’d acted as if a war was going on. (Schwartz’s promotion made him the first Air Force chief of staff to come up through the ranks as neither a bomber pilot nor a fighter pilot; the move marked the beginning of a huge cultural shift in that branch of the military.)

Gates also noticed that the Army’s most innovative colonels — brigade commanders who not only understood counterinsurgency theory but practiced it in Iraqi cities and villages — were getting stalled in their careers by generals with much less battlefield experience and who were wedded to Cold War precepts of combat. So, near the end of 2007, Gates called on Gen. David Petraeus, then the U.S. commander in Iraq and the architect of the counterinsurgency strategy there, to chair that year’s Army promotion board, which would advance 40 colonels to the rank of brigadier general. More than a dozen of the Army’s promising colonels, at least one of whom had been passed over twice, got their stars. With this single stroke, the Army’s culture — the signals sent to the troops of what kind of soldiers get promoted and what kind don’t — changed dramatically.

The hardest thing for civilian leaders to do is change the military’s organizational culture.  Presidents and SECDEFs try and fail on a regular basis.  Indeed, Dwight Eisenhower, who brought a bit of credibility in defense circles, got nowhere in eight years as president.

Bureaucracies have their way of doing things and seldom change them without extraordinary sustained pressure from outside.  Paradoxically, while the Defense Department exists to fight wars, its leaders tend to see any given war as a temporary aberration in the system that will soon correct itself.   Generals are loathe to defer development and production of major systems, which after all remain in the inventory for decades, in order to ramp up production of something that will only be needed for a few years.  And, of course, few thought Iraq and Afghanistan would go on as long as they have.

Similarly, combat leadership is viewed as a quaint anomaly.  So, while an H.R. McMaster might be an innovative and dynamic brigade commander under fire, he can be twice passed over for promotion to general officer in favor of a peer who spent those years at the Pentagon learning about the "real" work of the military.

There was much more to do but too little time before Bush’s presidency expired. So Gates began giving a series of public speeches. Their main theme was that the military needed to embrace the 21st century in its deployments, training, operations, and weapons buying. It needed, specifically, to shift away from what he described as "baroque" single-purpose weapons designed for Cold War scenarios (or big wars against big powers in a distant future that wasn’t likely ever to happen) toward cheaper, more versatile weapons better suited to the low-intensity conflicts the United States was actually fighting. In an almost unprecedented move, Gates also called repeatedly for more funding for the Pentagon’s traditional bureaucratic rivals in the State Department, warning of the "creeping militarization" of U.S. foreign policy.

Gates was explicitly laying out an agenda for the next defense secretary. Then he became him. Or, as he now puts it, "I punted all these balls to my successor and discovered I was the receiver." In the first half of Obama’s term, he has followed through, catching the punts and running with them farther and faster than anyone expected. (One exception is the notion of transferring money to the State Department; that hasn’t happened.)

Even before Obama’s term formally began, Gates launched a three-month review of every major line item in the half-trillion-dollar defense budget, drawing the entire building — the highest-level civilian analysts and military officers — into the process. By April 2009, his teams had compiled a list of 50 programs primed for change. Gates decided to kill, slash, or restructure 33 of them, including some of the services’ most cherished weapons systems.

Again, this is next to impossible.  While SECDEF is a leading actor in these decisions, he’s by no means the only one.   Congress, which appropriates the funds, almost always blocks moves to cut major weapons programs because they are almost always parceled out into enough states and districts to make dozens of Representatives and Senators stakeholders.   And the contracting industry is among Washington’s most effective lobbyists.   That Gates was able to achieve this demonstrates no only his superb bureaucratic skills but the esteem in which he is held on both sides of the aisle.

Gates won these fights for several reasons. The first was that he is Gates: a Republican hawk (albeit a relatively moderate one) and therefore immune to charges that he’s "soft on defense."

Second, he had the Joint Chiefs behind him, and that was because he fully consulted them at every step of the review. This is where Gates differs not only from Rumsfeld but from McNamara, the systems analyst who stormed into a Pentagon where no general had ever had to make a reasoned argument on behalf of a weapons system ("it’s a military requirement" usually sufficed) and imposed massive changes. Gates knew that, to make change stick, the officers carrying it out had to feel they had a stake in the decision. By contrast, when President Jimmy Carter and his defense secretary, Harold Brown, killed the B-1 bomber, the Air Force program managers, who hadn’t been consulted, didn’t really kill it; they tacked on some cosmetic changes and called it the "cruise missile carrier aircraft." When Ronald Reagan won the next election, they dropped the pretense, and the B-1 resumed as if Carter had never made the decision.

Kaplan notes that one of Gates’ current projects, drastically cutting the number of senior commands, might be "a bridge too far."

In the realm of Pentagon politics, it’s one thing to slash a few cherished weapons programs. But it’s another thing entirely to slash the number of colonels and generals — which, besides the obvious immediate threat to officers’ careers, means fewer promotions for majors and captains, who thus end their service at a lower rank and with less retirement pay. This is the sort of thing that could spark an old-fashioned officers’ revolt.

Unless the size of the force is cut, too — and Gates is not proposing that — the number of majors and lieutenants colonel shouldn’t much.  What would go away are the three- and four-star billets.  Considering that we have more of those now than we did during World War II, with a massively larger force, there are few serious analysts who think getting rid of some isn’t prudent.  And, since most officers retire as lieutenants colonel (or the Navy equivalent, commander) it’s hard to see a "revolt" developing.   But it’s unlikely to pass, either, since the cost savings would be minimal in the context of a multi-hundred billion dollar defense budget and, as Gates’ proposed shuttering of JFCOM demonstrates, generate substantial opposition from Congress.