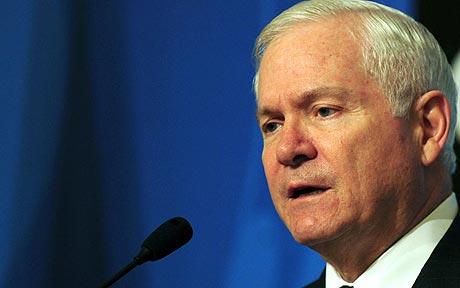 Beware Brussels; Secretary of Defense Robert Gates is coming to “put a bit of stick about.” Gates is planning to deliver a major speech with critical language while he is in Europe this week for his final meeting with NATO Defense Ministers.  Details cannot be provided at this time, except that his June 10th speech at the think tank SDA is entitled, “Reflections on the Status and Future of the Transatlantic Alliance.” Nevertheless, because those who wish to chart the future are always wise to study the past, below are some of Gates’ previous gentle prods to our NATO allies.

Well, I’ve been disappointed with NATO’s response to this ever since I got this job. NATO as an alliance, if you exclude the United States, has almost 2 million men under arms. Why they can’t get more than 32,000 to Afghanistan has always been a puzzle to me.

Excerpts from speech at the National Defense University, February 23, 2010:

That is a stark reminder that NATO is not now, nor should it ever be, a talk-shop or a Renaissance weekend on steroids. It is a military alliance with real-world obligations that have life-or-death consequences. . . .

The demilitarization of Europe – where large swaths of the general public and political class are averse to military force and the risks that go with it – has gone from a blessing in the 20th century to an impediment to achieving real security and lasting peace in the 21st. . . .

[U]nless the Strategic Concept spurs operational and institutional changes like those I just mentioned, it will not be worth the paper it is printed on.

I personally think that if there is anything to the notion that Turkey is, if you will, moving eastward, it is, in my view, in no small part because it was pushed, and pushed by some in Europe refusing to give Turkey the kind of organic link to the West that Turkey sought.

Speaking with reporters on a flight to Brussels for NATO Defense Ministers meeting, October 14, 2010:

My worry is that the more our allies cut their capabilities, the more people will look to the United States to cover whatever gaps are created. . . .

And at a time when we’re facing stringencies of our own, that’s a concern for me.

Excerpts from remarks during a closed meeting at NATO HQ for nations contributing troops to Afghanistan, March 11, 2011:

Frankly, there is too much talk about leaving and not enough talk about getting the job done right . . .

America is willing to do the lion’s share of the burden . . . but we cannot do it alone.

Jorge Benitez is the Director of NATOSource and a Senior Fellow at the Atlantic Council. (photo: AFP)