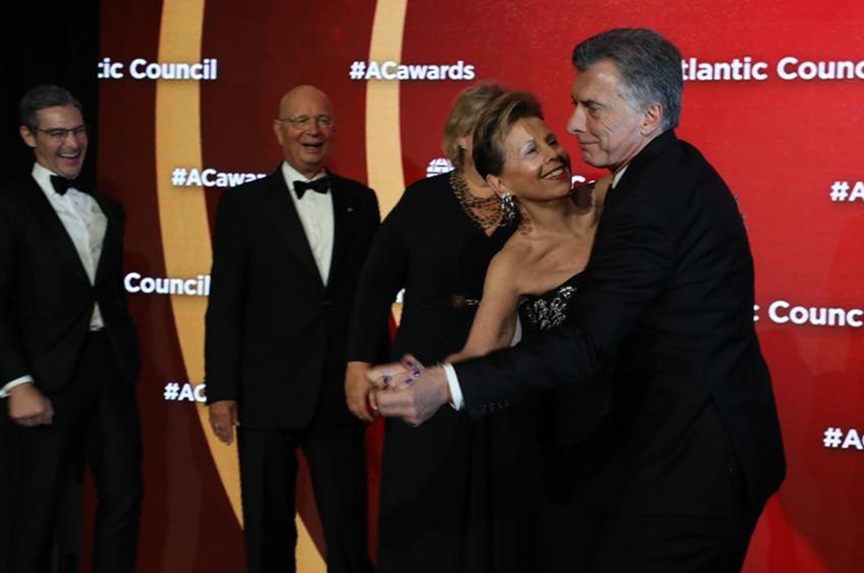 Frederick Kempe, president and chief executive officer of the Atlantic Council, said the Global Citizen Award was launched with three goals in mind. “First, we wanted to identify individuals who represent the sort of leadership and engagement we thought defined global citizenship at its best.  Second, we hope that by recognizing these individuals, we could inspire a host of others.  And finally, we wanted to underscore a pretty dramatic shift at the Atlantic Council, our own expanded global mission of galvanizing more effective efforts among friends and allies, certainly at our transatlantic core, but also globally, to secure the future at a time when we had anticipated would be a moment or an era of historic challenge,” he said.

In 2015, Ulukaya founded Tent Partnership for Refugees, a nonprofit organization that mobilizes the private sector to improve the lives of refugees around the world. Today, Tent’s 110 members support 200,000 refugees across thirty-four countries.

Ulukaya recounted a moving story of an interaction he had with a young refugee in Greece. On entering a temporary tent set up for refugees he met a family that had recently undertaken a treacherous crossing of the Aegean Sea. A young girl, who lost her brother on the journey, offered Ulukaya what he described as the sweetest tea he had ever tasted in his life. She directed a plea at him: “tell me I’m going to be OK.”

“I could not tell her that she was going to be OK,” Ulukaya said. Instead he fished out $500 from his pocket and offered it to the girl. She refused to accept saying she was not a beggar. “I’m struck by this dignity and honor,” Ulukaya said.

That was one interaction that has stayed with Ulukaya and inspires him to this day to help millions of refugees around the world. “One day I’m going to lock myself into another picture, that I see the same exact girl looking at me [and she says] thank you with [her] eyes.  And I say, of course, of course, my sister,” he said.

The belle of the ball. Almost everyone appeared to have a crush on Christine Lagarde, the managing director of the International Monetary Fund. Add to the long list of Lagarde’s accomplishments the fact that she herself received the Global Citizen Award in 2011.

David McCormick, chairman of the Atlantic Council’s International Advisory Board, kicked off the crush confessional. “I’ve had a crush on Christine ever since I met her about eleven years ago,” McCormick said.

Minutes later, Victor Chu, a member of the Atlantic Council’s International Advisory Board, sought to jokingly upstage McCormick with a confession of his own. “I have to make a confession, nine years before Dave, I had a crush on Christine Lagarde ever since we met at the International Board of Overseers at Chicago University,” he said.

Next, Adrienne Arsht, philanthropist and executive vice chair of the Atlantic Council’s board of directors, confessed that she had a crush on Macri, who in turn said he had great relationship with both Arsht and Lagarde.

In a thinly veiled reference to this recent history, Macri joked: “I have to confess that we started a great relationship [with Lagarde] some months ago.” He was confident that things will only get better “and it will end up in the whole country crushing on Christine!”

McCain’s ‘wicked sense of humor.’ The evening was rife with tributes to the late US Sen. John S. McCain who died on August 25 following a battle with brain cancer. McCain’s widow, Cindy McCain, accepted the award.

Retired Gen. James L. Jones, Jr., interim chairman of the Atlantic Council’s board of directors, fondly recalled the late senator’s “wicked sense of humor.” Jones, a retired Marine, recalled how McCain, a former Navy captain, would often joke that when he graduated from the Naval Academy he wanted to be a Marine “but was disqualified because at the time of his birth his parents were married!”

“Cindy knows that that joke went on for years and years, and I stood by and accepted that until the day that his son joined the Marine Corps,” Jones recalled with a chuckle. “And that was the last I ever heard that joke.”

Samantha Power, who served as the US ambassador to the United Nations in the Barack Obama administration, recalled a terse conversation she had with McCain in which the late senator suggested she resign.

In that conversation, McCain argued passionately for US leadership on ending the war in Syria. “There was just a man—an American senator, an American patriot—who cared so much that he was not going to miss an opportunity to make a case for US leadership as he saw it,” said Power. “He was an American original, one we will not see again.”

Put on those dancing shoes. While thankful to Arsht for her gracious introduction, Macri did have one quibble. She had forgotten to mention that he is a great dancer. Later, just to prove his claim, the Argentine president broke into an impromptu dance with Arsht as the night’s honorees gathered on stage for a photoshoot. The song, appropriately, was Frank Sinatra’s “I Get a Kick Out of You.”