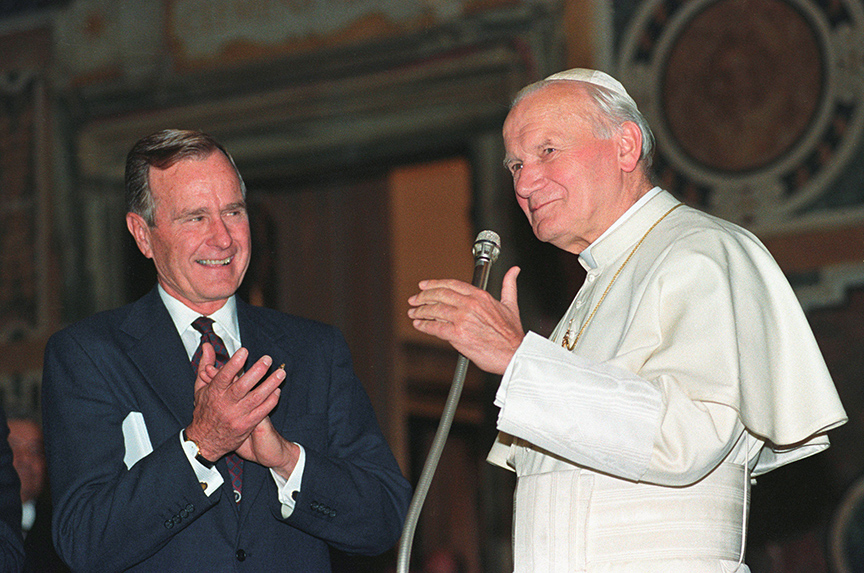 Vision and boldness are not labels usually attached to President George H.W. Bush. But such were the qualities he displayed in 1989, when he led the United States to embrace the advent of democracy in Poland, the first breakthrough in what turned out to be the end of Communist rule in Europe. Ahead of almost the entire US foreign policy establishment, Bush bet on freedom, one of the great calls of US Cold War policy. He showed prudence and restraint in his tactics, but deployed these qualities in the service of strategic US interests and its deeper values, which he understood were indivisible.

It is hard now to recall how improbable the end of Soviet rule in Europe seemed even as late as the 1980s. The United States and the West had accustomed itself, in practice if not in theory, to living with perpetual Communist domination of one-third of Europe. “Liberation” of Eastern Europe was regarded  as purely aspirational, if not irresponsible. President Ronald Reagan spoke of tearing down the Berlin Wall and meant it. But his conviction that democracy would prevail in the Cold War was shared by few, even in his own administration. Poland’s Solidarity was a mass, pro-democracy movement. But imposition of martial law in 1981 appeared to crush it.

But communism in Central Europe and especially Poland had failed to generate either political legitimacy or economic results. By 1988-89, with a Polish pope, John Paul II, in the Vatican, Solidarity was back, its underground structures functioning and strikes spreading. The Communist regime, facing rising, mass opposition, switched tactics and tried to co-opt the opposition, offering the so-called Roundtable Talks with Solidarity, which began in early February 1989, just after Bush’s inaugural.

Most in the new Bush administration dismissed the potential of change in Poland. The Hungarian Revolution of 1956, the Prague Spring of 1968, and the first Solidarity movement of 1980 had all failed, and the current effort would as well, or so went the thinking. (I was then Polish desk officer in the State Department, a modest position, surrounded by this thinking).

But in Poland, Solidarity’s leader Lech Wałęsa understood that the Roundtable Talks were an opportunity; that if the Communists through those talks gave up any of their monopoly of power, it might well lead to their giving it all up.

Bush also understood this, among few in Washington who did. In September 1987, as vice president, he had visited Poland. He knew Wałęsa, Communist Poland’s leader Wojciech Jaruzelski, and had a feel for the potential of the moment. The Roundtable Talks concluded in early April 1989. On April 17, according to their terms, Solidarity was re-legalized, and that same day Bush gave a speech throwing US support behind the new opening in Poland.

Polish parliamentary elections followed on June 4, only partly free (by terms of the Roundtable, 35 percent of the seats were freely elected, and the rest divided between regime-recognized groups and political parties). But Solidarity-backed candidates won every single open seat; the election had become a referendum on Communist rule and democracy had won.

The situation was fraught. Soviet troops still occupied Poland and the Soviet Union had never, and most Americans thought would never, let their European empire go. In Poland, Solidarity had a mandate but the Communists had the guns.

Into this mix of hope and peril, just a month after the Polish elections, Bush arrived in Poland (and Hungary, also going through political upheaval). In a speech to the newly-seated Polish parliament, now including former dissidents, democratic activists, and labor leaders turned elected officials, he pledged US backing for transformation of Poland and, by extension, all of Central Europe. In a trip to Solidarity headquarters in Gdansk, to wild enthusiasm, he boosted Polish confidence.

But Bush’s greatest achievement on that critical trip may have been the lunch he hosted in Warsaw, at the residence of the US ambassador, for the emerging Solidarity political leaders with the still-in-power Communist leaders, including Jaruzelski. This brought together former political prisoners with their former jailers.

To the Solidarity leaders, Bush offered support and recognition as the legitimate future leaders of their country. To the Communists, he offered respect if and as they surrendered power. Indirectly, he signaled to Soviet leader Mikhail Gorbachev that the Polish transformation had US backing, and that the Soviets could not reverse it without cost. His low-key style calmed nerves; his bold substance helped advance history.

By September 1989, a Solidarity-backed government was in power in Poland. Communist governments started falling across Central and Eastern Europe. The Berlin Wall came down. The Cold War ended on US terms, freedom’s terms.

Years later, in the late 1990s, Bush returned to Poland. I was then the US ambassador and had the chance to tell him how much his policy decisions and personal engagement had meant in 1989 and how much good had come of them. His response was characteristic: he looked down and murmured, “Oh, perhaps.”  But no doubt about it. George H.W. Bush was the right man at the right time.

Daniel Fried is a distinguished senior fellow in the Atlantic Council’s Future Europe Initiative and Eurasia Center. In the course of his forty-year Foreign Service career, Fried played a key role in designing and implementing American policy in Europe after the fall of the Soviet Union. As special assistant and National Security Council senior director for Presidents Bill Clinton and George W. Bush, ambassador to Poland, and assistant secretary of state for Europe (2005-2009), Fried crafted the policy of NATO enlargement to Central European nations and, in parallel, NATO-Russia relations, thus advancing the goal of Europe whole, free, and at peace.

Image: US President George H.W. Bush applauded Pope John Paul II after a welcoming ceremony prior to their audience at the Vatican on November 8, 1991. (Reuters/Rick Wilking/File Photo)