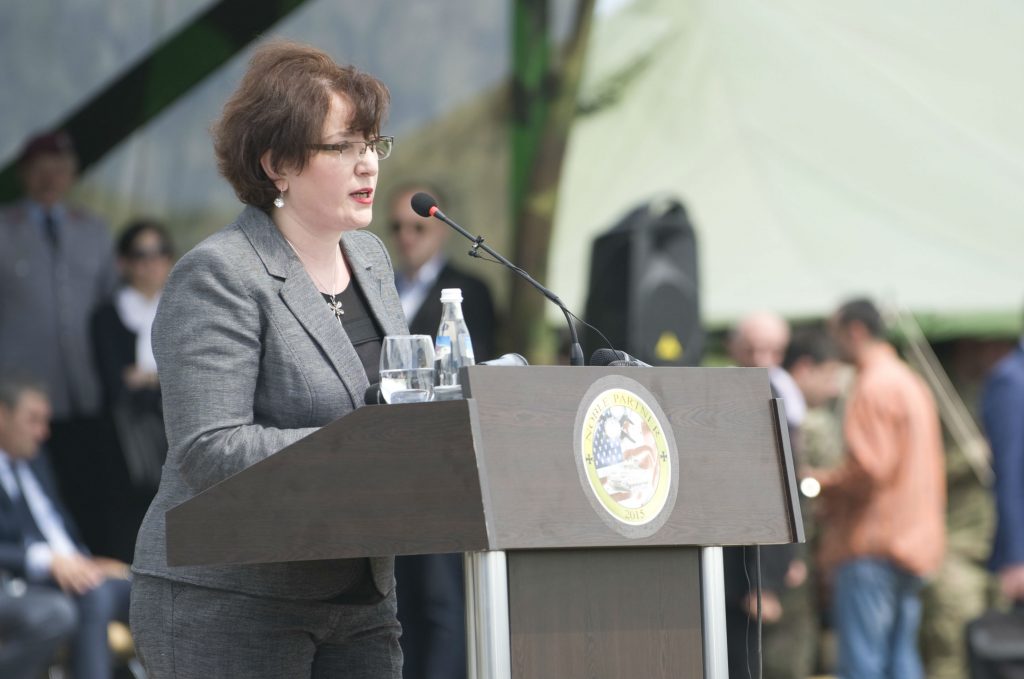 Georgian Defense Minister Tina Khidasheli speaks to US and Georgian soldiers, May 11, during the opening ceremony for Exercise Noble Partner 15. Noble Partner is a field training and live-fire exercise between the US Army and the Georgian military to support Georgia's participation in the NATO Response Force and build military ties between the two nations. Credit: US Army Photo by Sgt. Daniel Cole, Army Europe Public Affairs

The Warsaw summit of the North Atlantic Treaty Organization (NATO) has a chance to become another milestone in the history of the organization, if the alliance chooses to take the next step forward towards further enlargement.

There are several aspirant countries expecting bold decisions. Georgia is one of them. The Georgian government is taking a more aggressive stand in demanding acknowledgment by the alliance of Georgia’s progress in political and military reforms. The Ministry of Defense issued a statement in June  stressing that Georgia requests a Membership Action Plan at the Warsaw summit and Minister of Defense Tina Khidasheli made several statements about the pro-active position that the government is going to take on this issue.

This firm position on Georgia’s part should be welcomed. But based on past experiences of NATO’s inability to make a decision on Georgia, and in order to avoid further frustration of the Georgian public if no decision is made, it is essential to design the right strategy and accompany it with the right wording for both domestic and external consumption.

In terms of the strategy, pushing for the MAP should no longer be the priority for Georgia. In terms of the military compatibility and political-military reforms, Georgia is already very close to NATO standards. In addition, current instruments of bilateral relationships, such as the NATO-Georgia Commission and the Annual National Plan, provide mechanisms that could lead Georgia to membership. The priority is to convince the NATO partners that short of granting membership, Georgia expects an announcement at the Warsaw summit that current political and military components of the Georgia-NATO partnership can lead to membership without the MAP. This decision will allow the alliance to grant Georgia membership at the right political moment.

There is no secret that the key factor preventing Georgia’s membership in NATO is Russia. For years, Washington and many of its allies in Europe were keen to avoid anything that could escalate tensions with Russia. Looking at developments in Ukraine, that cautious approach didn’t really produce desirable results. Unfortunately, President Obama’s declaration in March 2014 that “neither Ukraine or Georgia are currently on a path to NATO membership,”  was understood by Moscow as Russia’s veto power over the enlargement of the alliance. That led to much greater escalation of the conflict in eastern Ukraine in the fall of 2014. Recently, Russia, yet again, moved the so-called borders of the breakaway South Ossetia region of Georgia deeper inside Georgia. As a result, part of the Baku-Supsa oil pipeline, which brings oil from the Caspian Sea to the Black Sea and supplies European and Israeli refineries, is now under Russian control. Clearly, the language of unilateral concessions doesn’t work with Russia.

Skeptics insist that bringing Georgia into NATO is dangerous since it cannot be defended against a Russian invasion. But the fact is that it is easier to defend the mountainous terrain of Georgia than most of the eastern borders of NATO—and this was the case during the Cold War as well.

In addition, while it is true that Georgia cannot defend itself alone, it is also true that with adequate military support, Georgia’s military can inflict very high costs on Russia in case further aggression takes place. NATO and US defensive anti-tank and anti-aircraft weaponry, as well as training, will serve as a significant deterrent to Russian aggression against its smaller neighbor.

The focus on the burden that Georgia would impose on the alliance also needs to be balanced with consideration of the wider contribution the country makes to Western security. With Western interests challenged in the Middle East by radical Islamic State militants, and by Russia in Ukraine and potentially in the Baltics, maintaining a strategic Western presence in the potentially volatile South Caucasus is even more important. Georgia is also a central part of the East-West energy and transportation corridor, providing pipelines, ports, railways, and highways to bring vital energy resources from Central Asia. This East-West corridor via the South Caucasus has the potential to become the shortest and fastest land route for container shipments between Europe, the Mediterranean, and China, thus becoming an important pillar for global trade.

What Georgia needs in Warsaw is the formal declaration by the alliance’s leaders that Georgia can be admitted to NATO at any given moment without a MAP. This would avoid providing Moscow with any pretext for further negative escalation in the Caucasus. Currently Moscow believes that NATO is not ready to accept Georgia in the alliance and by not giving Georgia MAP NATO will confirm Russian expectations. At the same time, by removing the impediment of a MAP, NATO would strengthen the Georgian public’s faith in the vision of “joining the West.” The understanding then will be that Georgia may become a member when NATO makes a political decision about the issue and there will be no technical impediments for membership at that moment.

In addition to traditional allies from Eastern Europe who always supported Georgia’s NATO aspiration, the focus of Georgian diplomacy during the next twelve months should be on three key NATO members: the United States, Germany, and Turkey.

US leadership will be decisive in the process, but Germany and Turkey in many ways hold the key for Georgia’s NATO future. Both countries should see incentives for their support. Germany may become the key beneficiary of the China-Europe land trade in the future and thus should care more about the security and stability of Georgia. Turkey is a key member of NATO and a neighbor of Georgia with whom Georgia is enjoying close political and commercial ties. But Turkey is facing increasing challenges in the Middle East and having a stable and reliable ally next door would be important.

The US can and must help Georgia deal with these allies. Welcoming Georgia’s troop contribution to US and NATO operations for more than decade and not allowing Georgia to have a clear pathway to join the collective security organization that can protect the country’s sovereignty is a moral failure of the West. There is an opportunity to make a positive turn in Warsaw.

Mamuka Tsereteli is the director of research at Central Asia-Caucasus Institute at Johns Hopkins University’s School of Advanced International Studies. He was a member of the Atlantic Council’s Georgia Task Force.