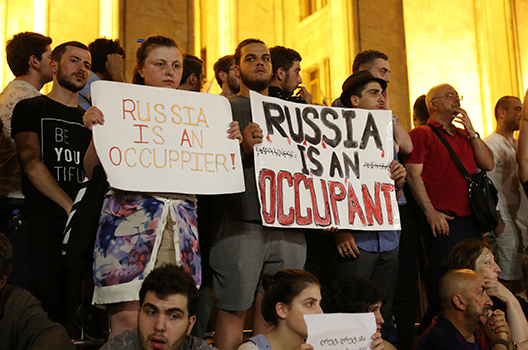 On June 20, thousands of Georgians took to the streets of the capital, Tbilisi, to express their disapproval of a Russian lawmaker addressing the Georgian parliament from the speaker’s chair. Sergei Gavrilov, a Russian State Duma deputy and president of the Interparliamentary Assembly on Orthodoxy, visited Georgia for the convening of the organization’s 26th General Assembly, an event designed to foster relations between Orthodox Christian lawmakers. The procession, however, was cut short by opposition politicians who doused Gavrilov with water before he was escorted out of the building.

Relations with Moscow have remained a contentious issue in domestic Georgian politics since the 2008 Russian invasion of the Georgian states of Abkhazia and South Ossetia. Memories of the bitter conflict are still sensitive as hundreds perished and 250,000 were left internally displaced. Gavrilov’s presence in the nation’s parliament building was an unwelcome reminder for many Georgians that a fifth of their country is still occupied by the Russian military. Allegations made against Gavrilov regarding his participation in military activities on the territory of Abkhazia further compounded public outrage. While he denies such claims about his past, Georgian opposition politicians likened Gavrilov’s address to parliament to a “slap in the face to recent Georgian history.”

More importantly, Georgian demonstrators found the government’s decision to invite the Russian delegation as evidence of its disconnect from popular sentiment. The billionaire founder of the ruling Georgian Dream party, Bidzina Ivanishvili, attributed the invitation to an “error in protocol.” The head of the Georgian delegation for the Interparliamentary Session on Orthodoxy, Zakaria Kutsnashvili, has since resigned from his position.

Less than twenty-four hours after the first demonstrations, Irakli Kobakhidze, the speaker of Georgia’s parliament, also resigned, fulfilling one of the main demands voiced by protesters and the opposition. The demonstrators also called for Interior Minister Giorgi Gakharia to be dismissed and for snap parliamentary elections to be held via a proportional electoral system. Gakharia has not expressed an intent to resign his post and there are no plans so far for an earlier date for parliamentary elections. In an attempt to address protesters’ grievances, the government approved a change to the country’s electoral system from a mixed electoral system to a proportional one.

Although the government has made concessions, protesters have voiced additional demands since the initial June 20-21 riots. Rallies and hunger strikes have been held in support of the 305 demonstrators detained during initial protests and many have also joined the movement to protest police brutality in the capital. Despite graphic images disseminated by the international news media on June 21, Bakhtadze initially denied that police had used rubber bullets. That same day Human Rights Watch and Amnesty International condemned the unlawful and harsh conduct of law enforcement officers who failed to provide protesters with advance warning before using tear gas and firing rubber bullets into the crowd. The Office of the Chief Prosecutor announced that an investigation is underway and is soliciting video evidence from civilian demonstrators. Ten officers were detained on June 24.

On June 25, the Georgian prosecutor-general’s office charged member of parliament Nika Melia, a leader of former President Mikheil Saakashvili’s United National Movement party, with inciting violence and stripped him of his immunity. The opposition politician could face up to nine years in prison and his bail has been posted at approximately $10,000.

The swift resignation of the speaker of parliament and the changes made to the electoral code are significant outcomes for the Georgian opposition. Nevertheless, these gains came at the cost of 240 injured and 305 detained, as well as economic blows dealt by the Kremlin.

Citing security risks, the Russian State Duma has called for the cancellation of flights to Georgia and recalled Russian nationals back to the homeland starting on July 8. Last year, approximately 1.4 million Russian tourists traveled to Georgia, spending around €632 million, nearing 10 percent of Georgia’s annual tourism revenue. Some experts estimate that Georgia’s tourism industry could lose $300 million annually from the travel embargo.

As an initial response, Georgian Minister of Economy Natia Turnava released a public statement affirming that Georgia is a safe destination for all tourists. Other countries also responded. The former president of Ukraine, Petro Poroshenko, tweeted that Ukrainians should choose Georgia as their next travel destination. Additionally, Russian tourists in Georgia publicly praised the country’s hospitality.

The Kremlin has also targeted Georgian wine exports to Russia. Approximately 60 percent of the wine produced in Georgia last year was exported to Russia. On June 24, Russian state consumer watchdog, Rospotrebnadzor, released a statement detailing the “deteriorating quality” of eight Georgian wine exporters. Georgia’s former foreign minister, Irakli Menagarishvili, called Russian President Vladimir Putin’s recent escalations a declaration of “economic war.” Kremlin spokesperson Dmitri Peskov nevertheless maintained that this development is apolitical and has nothing to do with the Tbilisi protests. While Moscow looks to target major sources of revenue for the Georgian economy, Tbilisi has weathered this kind of punitive behavior from its neighbor before and seems confident in its capacity to do so again.

Tensions between the two governments have not been higher since the war in August 2008. Just last year, Russian Prime Minister Dmitri Medvedev expressed ambitions for a “full-scale dialogue” between Moscow and Tbilisi. Last week, Georgian President Salome Zourabichvili posted a statement on Facebook labelling Moscow as the “enemy and occupier” and cautioned against the dangers posed by “the Fifth Column orchestrated by Russia.”

On June 20, Peskov condemned the Tbilisi protests as “Russophobic provocations.” Russian-state media has sought to blame the West for turning a blind eye to “ultra-nationalists” wreaking havoc and endangering Russian citizens residing in Georgia. However, there is a critical distinction between the memorialization of chosen national traumas and the “ultra-nationalism” that the Russian-state media cautioned against in Tbilisi. While the Kremlin desires to further blur these lines, the “anti-Russian” sentiments fueling the crowds are not directed toward Russian nationals.

The “anti-Russian” and “anti-Putin” placards and banners circulating online express Georgian enmity towards their neighbor’s encroachment of its territorial sovereignty. As one protester clarified: “[Georgians] are fighting against Putinism” and have “no problems whatsoever with the Russian people, we are not xenophobes.” Within Georgia, these riots are also a symptom of domestic political polarization in which a segment of society feels its government is disconnected from popular sentiment.

Outside observers must resist conflating anti-Kremlin sentiment with Russophobia. At the same time, the Georgian people have a responsibility to make explicit that these protests are not a violent manifestation of Russophobia, as the Kremlin has attempted to paint them. Georgians would burnish their international standing if they also demonstrated that domestic political disputes could be settled within the sovereignty of Georgia and through legitimate governmental institutions. If Georgia wishes to continue its path to the strategic West, all sides of the political spectrum should make deliberate efforts to reduce the degree of partisanship and accurately address the frustrations of Georgians. At the bare minimum, major political parties in Georgia must cooperate to withstand the predicted economic instability.

Tina Maglakelidze is an intern with the Atlantic Council’s Eurasia Center. Follow the Center’s work @ACEurasia.

Image: Protesters attend a rally against a Russian lawmaker's visit near the parliament building in Tbilisi, Georgia June 22, 2019. (REUTERS/Irakli Gedenidze)