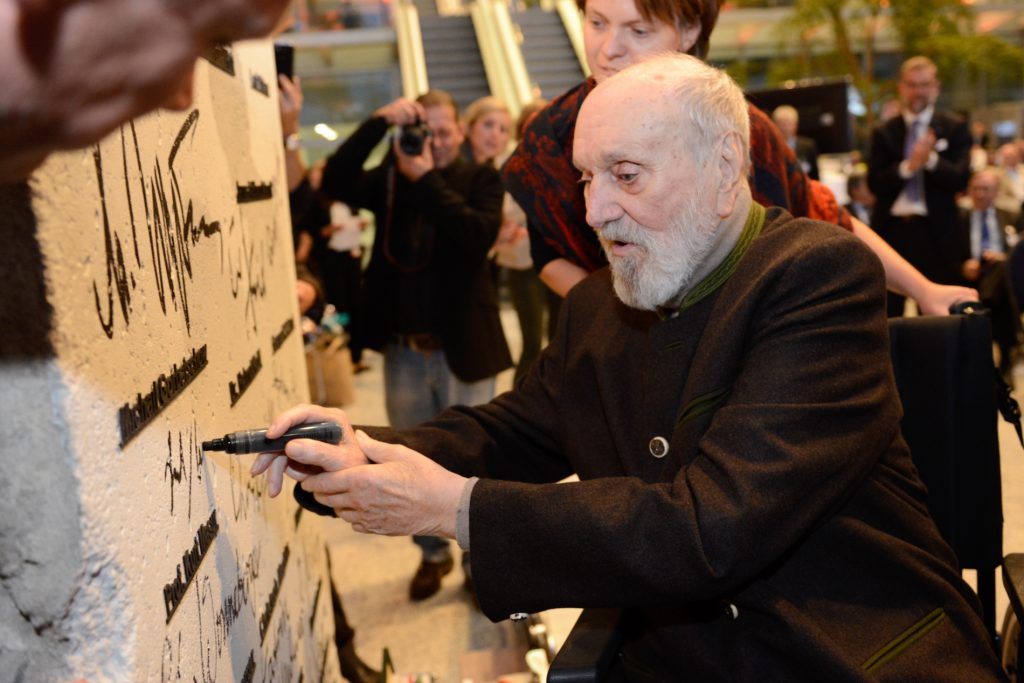 In the quarter-century since the Berlin Wall fell, a group of Germans has created a particular memorial to that event: a three-ton segment of the wall signed by the government and other leaders who managed the peaceful ending of the Cold War. This week, they presented it as a gift to the American people, to be kept in Washington as an encouragement of continued U.S. engagement with Europe. The move comes as the United States and European governments have worked, with some difficulty, to present a unified front against Russia’s invasions this year of Ukraine.

Civic, business and political leaders in the eastern German city of Leipzig for years have circulated the nearly twelve-foot-high concrete slab around Europe to gather signatures of prominent figures who helped bring down the wall and peacefully re-unify Germany and Europe. Among more than twenty signers of the wall’s “Signature Segment” are the three government leaders at the center of the Cold War’s end: Soviet President Mikhail Gorbachev, US President George H.W. Bush, and German Chancellor Helmut Kohl. The Polish labor union leader, Nobel Peace Prize winner, and president, Lech Walesa, signed the slab, as did Chancellor Angela Merkel, Germany’s first head of government to have come from the former Communist East Germany.

The signers include civic and church leaders from Leipzig who in September 1989 began the protest movement that spread to eventually force the collapse of the wall and the Communist East German state. German conductor Kurt Masur, who directed Leipzig’s main orchestra at the time, signed the slab yesterday in commemoration of his intervention with Communist authorities to prevent them from forcibly crushing the protest movement, as China had done four months earlier at Beijing’s Tienanmen Square. In recent years, the Signature Segment has been exhibited across Germany, Norway, and Belgium to educate school-children about the Wall and the Cold War.

Gift ‘to Promote US Engagement’

Alongside Masur, former US Secretary of State James Baker and other figures autographed the slab in Leipzig yesterday. At that ceremony, the segment’s official owner, the Leipzig-based company Verbundnetz Gas, presented the segment to the Atlantic Council to oversee its placement in Washington in November. Leipzig’s gift is intended “as a symbol of the struggle for freedom and unity, and of good transatlantic relations,” and aims “to promote US engagement in international affairs and the central role of the Atlantic community,” a statement from the company said.

“This unique piece of [the] Berlin Wall will serve as a permanent reminder of what unfree systems can impose when free systems fail to resist,” said Atlantic Council President Fred Kempe, who chronicled the wall’s origins in a 2012 book, Berlin 1961: Kennedy, Khrushchev, and the Most Dangerous Place on Earth. “At a time when Russia is changing European borders by force, and when the threat of Mideast extremism is spreading, the Berlin Wall’s fall demonstrates what the Atlantic community can achieve when it remains patient, unified and determined.”

With Kempe, Atlantic Council attendees at Wednesday’s ceremony included Baker, an honorary member of its board of directors, and former US Secretary of State Henry Kissinger, who is the Council’s longest-serving board member. The wall’s Signature Segment is to be flown to Washington for a ceremony in November marking the 25th anniversary of the Berlin Wall’s collapse. Other signatures will be added, including that of former National Security Advisor Brent Scowcroft, who also is a member of the Atlantic Council’s board. The Atlantic Council will report on the segment’s transition to Washington on Twitter at #BeyondBerlinWall.

Image: Kurt Masur, 87, the former conductor of the New York Philharmonic and London Philharmonic Orchestras, signs the segment of the Berlin Wall autographed by historic figures who played roles in its collapse. Masur, a native of Leipzig, where East Germany's 1989 protests against the wall began, helped block the Communist government from crushing the protests by force, as China had done four months earlier in Beijing's Tienanmen Square. (VNG)