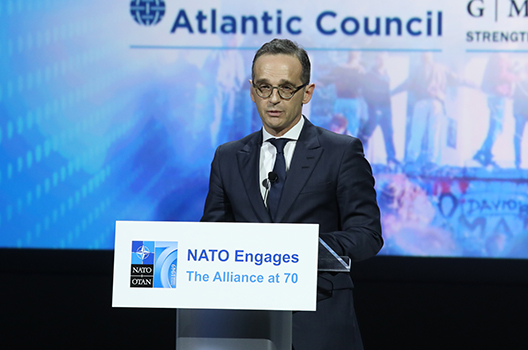 Amid a storm of criticism from the Trump administration over its low level of defense spending, German Foreign Minister Heiko Maas sought to allay concerns that Berlin was reneging on its commitment to increase its contributions to the NATO Alliance.

“We will stand by our commitments,” Maas said on April 3 at the NATO Engages event in Washington. “I know that our budgetary process is sometimes difficult for outsiders to understand…however, we made a firm commitment to invest more money in our defense and we intend to keep our word.”

A budget plan released by German Finance Minister Olaf Scholz on March 20 included a controversial assessment that German defense spending could fall to 1.25% of gross domestic spending (GDP) by 2023 after briefly rising to 1.37% in 2020. Both levels of spending are much lower than the 2% of GDP agreed to by NATO allies at the Wales Summit in 2024. German Defense Minister Ursula von der Leyen had indicated in May 2018 that Germany would aim for 1.5% of GDP by 2024.

The March 20 budget proposal prompted swift condemnation from US officials. US ambassador to Germany Richard Grenell said in response that Berlin “reducing its already unacceptable commitments to military readiness is a worrisome signal to Germany’s twenty-eight NATO allies.” Speaking with NATO Secretary General Jens Stoltenberg in the Oval Office on April 2, US President Donald J. Trump complained that “Germany is not paying their fair share.” Speaking before Maas at the NATO Engages event, US Vice President Mike Pence said that “it is simply unacceptable for Europe’s largest economy to continue to ignore the threat of Russian aggression and neglect its own self-defense and our common defense at such a level.”

At the same time, Mass said that “burden sharing is more than defense expenditure. Anyone asking about burden sharing must look at the entire spectrum of resources, capabilities, [and] contributions to NATO operations and Alliance defense.” He noted that Germany was the second largest troop contributor to NATO forces in Afghanistan, continues to be a leading country in devoting troops and fighter aircraft to the defense of the Alliance’s eastern members, and has taken over command of NATO’s Very High Readiness Joint Task Force.

Maas explained that “these decisions have provoked heated discussions in our country. These debates are necessary in view of Germany’s history.” But he stressed that “Germany wholeheartedly supports the NATO Alliance.” Germany also knows “that we cannot take our security for granted. We have to shoulder responsibility in order to continue safeguarding” Europe, he said.

Maas also stated that Germany remains committed to the defense of its allies against Russia. The Trump administration and other eastern and central European allies have heavily criticized Germany for continuing the Nord Stream 2 pipeline project, which they allege will increase Europe’s dependence on energy from Russia and risk Alliance cohesion against the Kremlin. Pence said on April 3 that the pipeline would “turn Germany’s economy into literally a captive of Russia.”

“We are aware of the concerns of our eastern and central European partners in particular and we take these concerns seriously,” Maas maintained. “Especially at a time when Russia is repeatedly trying to test our unity, we must and we will stand united,” he added. At the same time, however, he argued that this does not “mean breaking off all channels of dialogue with Russia.”

Despite the current disagreements in the alliance, Maas said that “both sides of the Atlantic over the last seventy years have shown how valuable strong allies are,” adding that “the Alliance is an unparalleled success story. There is no doubt about that.”

Following the devastating world wars of the 20th century, NATO gave Germany a “second chance,” according to Maas. “We Germans won’t forget that.”