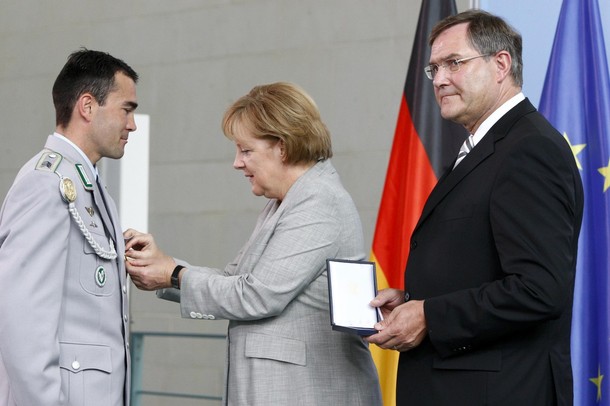 On Monday, for the first time since 1945, German soldiers were awarded the Iron Cross for bravery on the field of battle.  The ancient Teutonic symbol, which dates back to the Crusades and was first awarded as a military medal in 1813, was pinned onto the chests of four German servicemen who dragged wounded comrades and local children from the site of a suicide attack in Afghanistan last October.

They were no doubt heroes that day, and the symbolism of their being acknowledged as such by the German Government cannot be overstated.

It was not only the rest of the world that mistrusted the Germans after World War II; they also very much mistrusted themselves.  Konrad Adenauer, Germany’s first post-war Chancellor saw himself as the only force standing between his people and their inherent inclination towards more war.  He confided to the Belgian foreign minister in 1955, “When I’m not here anymore, who knows what adventures they’ll get up to.”

This mistrust has also been reflected in the German people’s attitude toward the military.  Article 87a of the German Grundgesetz (Basic Law, or Constitution) curtly states that “the federation establishes a military for defensive purposes.” No German soldier saw violent military action outside of Germany’s borders from 1945 until the NATO assault on Kosovo in 1999, and from the time since World War II there has been little sanctioned celebration of the military in Germany-no flags bearing battle honors, no regimental traditions, and certainly no medals for bravery.  The only medals handed out by the military in recent years were for distinguished or particularly lengthy service (primarily at home in Germany).

The awarding of the Ehrenkreuz der Bundeswehr für Tapferkeit (Honored Cross of the Federal Military for Bravery) has sparked a raucous debate in Berlin.  While a ministry spokesman claimed that, “This is an entirely new decoration. It has nothing to do with the Iron Cross” — and it is now gold rather than the traditional black and silver — it remains a recognizable symbol of an older era in German history.

Its creation (10 days before the October 20 suicide bomb attack in Afghanistan) was championed by conservative Chancellor Angela Merkel as absolutely necessary for an army in the field, and very much in keeping with the practices of other NATO states. “In Germany we are too shy about discussing the trials, challenges and risks faced by our soldiers.” The military representative in theBundestag , Reinhold Robbe, spoke of the need to celebrate the camaraderie, loyalty, bravery and heroism of the German armed forces. He argued that the new bravery medal was emblematic of “positive patriotism,” not the hero’s cult of the Nazi era when swastika-emblazoned Iron Crosses were handed out in the millions.

Germany’s Social Democrats view the move with suspicion, and the left is up in arms. Social Democrat Rainer Arnold groaned that the medal would lead to “patriotic celebration of the military like in the USA.”  The head of Germany’s Jewish Council calls this a “test balloon” and representatives from the Left Party called it “an attempt to encourage the public to accept war.” They argue that Merkel has given out these awards for political reasons less than two weeks after three German soldiers were killed in Afghanistan in order to increase waning public support for an unpopular war.  The Bundestag also recently agreed to increase the number of German troops in Afghanistan by (the albeit paltry number of) 300, and with only two months before a general election, the four Iron Crosses could very well be as much a political maneuver on behalf of Merkel as an attempt to consciously alter Germany’s self image.  Still, Left Party defense expert Paul Schäfer hit the nail on the head with regards to the German military’s motivation: “The introduction of a medal for bravery demonstrates that the Bundeswehr would like to permanently cement itself in the role of a task force ready to operate the world over.”

Otto von Bismarck, himself an Iron Cross recipient, famously said, “Not through speeches and majority decisions will the great questions of the day be decided – that was the great mistake of 1848 and 1849 – but by iron and blood.”  For Germany that day is long since passed.  The reality is that Germans are increasingly wary of the continued deployment of their troops in Afghanistan, and indeed there is no guarantee that Germany will prove a more proportionally representative military ally for the United States in future conflicts.

However, while there remains a powerful aversion to war within the bones of the German public, this medal does to a small extent demonstrate that Germany’s understanding of its role in the world has undergone a symbolic shift-German soldiers are no longer to be feared or shunned, they are to be respected.  Germany’s army is no longer a purely defensive machine to be used against a massive Soviet invasion but one of action, that makes positive contributions to addressing security crises around the world from Somalia to Bosnia to Afghanistan.  As Ernst Reinhard Beck, a CDU representative in the Bundestag recently said, no one could argue that “under [the Iron Cross] fear, horror and pain have been brought to the people of the world,” rather he wanted Germans to finally realize that “for the last 15 years, in which the Bundeswehr has been active in foreign countries, to the inhabitants of crisis-stricken lands this Iron Cross has become a symbol of hope.”

Nicholas Siegel is an assistant director of the Transatlantic Relations program and a research assistant to the president at the Atlantic Council.