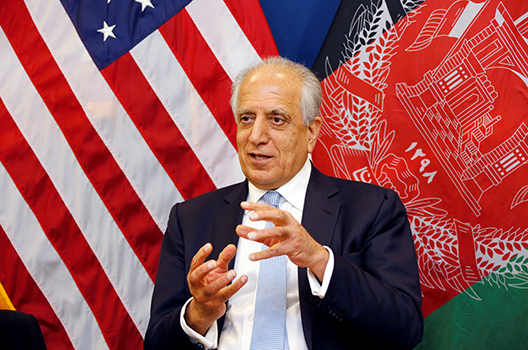 After seventeen years of war in Afghanistan, the NATO Mission Commander, US Army Gen. Austin “Scott” Miller, provided a candid assessment of the situation, stating: “This [war in Afghanistan] is not going to be won militarily… This is going to a political solution.”

Last week, talks between Zalmay Khalilzad, the US special representative for Afghanistan reconciliation, and the Taliban produced a tentative agreement that has generated hope for peace. What then are the mechanisms through which the military resources of the remaining thirty-nine troop-contributing nations can be translated into an enduring political resolution in Afghanistan?

Four lines of effort are distilled from the reorientation of the desired end state: reconciliation,reintegration, narrative shaping, and transition. While these concepts have been utilized in the past, they can only have the intended outcome when woven into a strategic coherence that incorporates operational art and intuitive judgment as applied by seasoned professionals, rather than the constraints of rigid bureaucratic planning. We sketch out this effort below.

All solutions developed to address Afghan problems must incorporate five key characteristics. First, solutions should favor localized bottom-up approaches that recognize Afghanistan’s diverse nature and its internal regions and are tailored to meet those specific challenges.  Second, solutions should be Afghan-led and Afghan-implemented, but with US oversight that holds Afghanistan accountable for the results.  The United States and its coalition partners must permit and support Afghan initiatives, while balancing the pursuit of core national interests. Third, solutions should be durable and sustainable. The Afghan government must recognize the forthcoming decreases in donor support and implement and sustain solutions without the excessive US or coalition funding commitments.  Next, solutions should be resilient to changes in US and Afghan leadership (both military and civilian), policy, political personalities, and political priorities. Finally, once developed, the initial implementation of initiatives should be in areas that are most conducive for success.  Proofs of concept or “confidence targets” should be used to enhance the resiliency of solutions before full-scale implementation.

Beyond the military’s explicit responsibility to apply pressure on the Taliban, coalition forces have many features that should enable them to assist Afghan progress. They have access to less-secure areas of the country, possess established relationships with Afghan officials, and contain powerful intelligence assets that make them a critical component in facilitating a political solution. Given these attributes, how can military actors direct their efforts to better enable a sustainable political resolution?

We now turn to four lines of effort upon which planners should focus: reconciliation, reintegration, narrative shaping, and transition.

Getting Taliban insurgents to reconcile or reach a settlement will require a careful mixture of carrots and sticks. This will require inducements to insurgents to put down their arms, but in a manner that does not alienate those members of the population that have remained loyal to the Afghan government. Some of the reintegration will likely happen organically at the local level, while some may require centralized government intervention. To create circumstances most conducive for negotiations, the Afghan government must maintain military and social pressure on the Taliban while simultaneously providing viable, attractive, and feasible alternatives for those choosing to abandon the fight. Due to the somewhat fractured nature of the Taliban, the Afghan government should apply a methodical and targeted approach to pressuring the Taliban in designated areas with greater susceptibility to government influence, while pursuing a simultaneous “bottom-up and top-down” approach to reconciliation efforts.

The foundation for progress in Afghanistan will be based on the Afghan government’s ability to mobilize the population through influence operations. Changing Afghan perceptions will require a long-term, coordinated strategic approach that synchronizes words and actions with a unified narrative for Afghanistan.

To further improve narrative and influence operations, the coalition should empower Afghan-led messaging that leverages Islam and culture to build a better story. The messages must appeal to emotions through appropriate dissemination mechanisms and be backed by deeds.

Information operations against the Taliban need to be synchronized with broader strategic goals. A campaign to increase social pressure on individual Taliban leaders to pursue peace could reap large benefits by creating a suffocating degree of social pressure on local Taliban targets to force reconciliation. To further the narrative, a psychological operation could be devised to foment uncertainty about the ability of Taliban members’ families to remain in Pakistan. This would serve two purposes.  First, it could sow doubt between the Taliban and the Pakistani Inter-Services Intelligence (ISI).  Second, it could put direct pressure on Taliban leaders to consider settlement or reconciliation more thoroughly as a viable alternative.

The Transition of Roles in Afghanistan

Most importantly, the coalition needs to continue shifting ownership of the mission to its Afghan partners, or the United States will find itself attempting to solve the same Afghan problems seventeen years from now. Failing to encourage Afghan independence and legitimate governance will result in Afghanistan remaining a donor state reliant upon foreign presence and support to function beyond the current Resolute Support Mission.

More specifically, the US government will have to reconsider its deployed structure, organization, and roles to appropriately address changes in the environment. As the situation improves, troop numbers may decrease, and the military must determine how it will accomplish updated objectives. The lead agency should transition from the Department of Defense to the Department of State, with the military in a supporting role, such as with the presence of a Special Operations Command Forward battalion headquarters or participation in sub-national interagency platforms.

Finally, the Afghan government needs to set the conditions for greater regional cooperation external to Afghanistan. Initiatives leveraging the Afghan Special Security Forces (ASSF) can encourage regional partnerships and increase interoperability with partners to promote regional security and cooperation on other issues.

In sum, the path to the end of the conflict in Afghanistan will be political (as opposed to military) and it will be in the hands of the Afghans (as opposed to Americans). Miller’s pointed recognition of this fact creates the space for a fundamental reframing of this foreign policy challenge, and we have sought, for our part, to provide some ways forward. For further details that explain these topics and more, refer to the authors’ full report.

Majors Thang Tran and Philip Swintek are Army Special Forces officers from the 10th Special Forces Group (Airborne). They are graduates of the Defense Analysis Department at the Naval Postgraduate School in Monterey, California. Both officers have multiple combat tours in Afghanistan.

Leo Blanken is an associate professor in the Defense Analysis Department of the Naval Postgraduate School and an Atlantic Council nonresident senior fellow. He is the author of Rational Empires: Institutional Incentives and Imperial Expansion (University of Chicago Press, 2012) and co-editor of Assessing War: The Challenge of Measuring Success and Failure (Georgetown University Press, 2015).

The views expressed in this article are those of the authors and do not reflect the official policy or position of the Department of Defense or the US government.

Image: US special envoy for Afghanistan Reconciliation, Zalmay Khalilzad, speaks during a roundtable discussion with Afghan media at the U.S Embassy in Kabul, Afghanistan January 28, 2019. (U.S Embassy/ Handout via REUTERS)