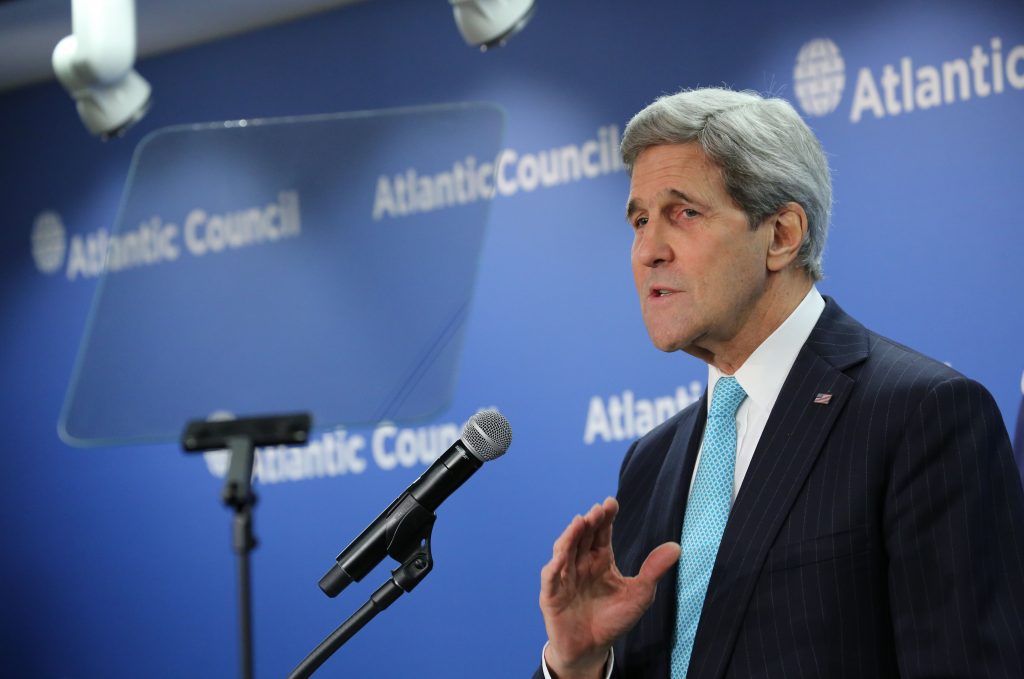 ‘There is no Planet B’: In Atlantic Council address, Secretary turns up heat on global warming deniers

Climate change is “one of the biggest threats” facing the Earth today, and anything less than a “global solution” to fight it will not work, US Secretary of State John F. Kerry said March 12.

In an impassioned plea to the save the planet, Kerry accused climate change deniers of gambling with the Earth’s future. He described their actions as “beyond reckless” and “plain immoral.”

“We need to face reality: There is no Planet B,” said Kerry, speaking at the Atlantic Council’s “Road to Paris” Climate Series.

US President Barack Obama has committed to reaching a strong climate agreement at the United Nations summit in Paris this December. His efforts have been bolstered by a landmark US-China deal to cap carbon emissions, the European Union’s pledges to cut emissions, and a commitment from Indian Prime Minister Narendra Modi to expand the use of renewable energy. These commitments from the world’s largest emitters have added momentum toward achieving a deal in Paris.

“We will see whether or not we can muster the collective political will to reach an ambitious, comprehensive agreement” in Paris, said Kerry. “If we fail, future generations … will judge our effort, not just as a policy failure, but as a collective, moral failure of historic consequence. And they will want to know how world leaders could possibly have been so blind, or so ignorant, or so ideological, or so dysfunctional, and, frankly, so stubborn that we failed to act on knowledge that was confirmed by so many scientists in so many studies over such a long period of time and documented by so much evidence.”

Kerry reserved a substantial part of his address to make the case that climate change—confirmed by “97 percent of peer-reviewed climate studies” over two decades— is real. He criticized skeptics, including a reported ban in Florida on the terms “climate change” and “global warming,” saying “we literally do not have the time to waste debating whether we can say ‘climate change.’”

“When science tells us that our climate is changing and human beings are largely causing that change, by what right do people stand up and just say, ‘Well, I dispute that’?” he added.

Scientists largely agree that climate change has caused temperatures to rise, polar ice caps to melt and sea levels to rise. All this, they say, has led to extreme weather events and food shortages that will eventually cause conflict.

“You don’t need to be a scientist to see that the world is already changing and feeling the impacts of global climate change,” said Kerry, adding that world is paying a heavy price because of climate change.

In 2012, extreme weather cost the United States nearly $120 billion in damages. Environment-related health problems such as asthma cost $50 billion annually and kill 4.5 million people a year around the world.

So what can be done about climate change?

“The solution is not a mystery,” the Secretary said. “It’s staring us in the face. It’s called energy policy. Energy policy, that’s the solution to climate change.”

And this solution can be achieved if world leaders have the political courage to make tough but necessary choices, he added.

The United States is on track to reaching its goal of cutting greenhouse gas emissions by 2020. Obama has put in place standards to double vehicle fuel efficiency and has proposed regulations to curb pollution from power plants. Domestic generation of solar and wind energy is also on the rise.

“It’s not enough for one country or even a few countries to reduce emissions if their neighbors are unwilling to do their share. So when I say we need a global solution, I mean it. Anything less won’t work,” he added.

Developing countries account for two-thirds of the world’s emissions. Some have resisted adopting clean energy solutions because they believe it is costly and will hamper growth, though Kerry sought to dispel that argument.

“In economic terms, this is not a choice between bad and worse. … [I]n fact, the economics will show you that it is better … and cheaper in the long run,” he said.

“Coal and oil are only cheap ways to power a nation in the very near term. But if you look a little further down the road, you begin to see an entirely different story,” he added.

The recent decline in oil prices and the US domestic energy boom have hurt some countries, including Russia and Iran, Kerry said in response to a question from Atlantic Council President and CEO Fred Kempe.

Describing clean energy as one of the greatest economic opportunities of all time, Kerry added: “We’re talking about a $6 trillion [global energy] market today with four to five billion users today. That will grow to nine billion users over the next few decades.”

Kerry said the solution to climate change is “not a pipe dream. It’s a reality.”

“It’s right there. And it’s up to us to grab it,” he said. “The question is whether or not it is beyond our collective resolve.”

Image: “You don't need to be a scientist to see that the world is already changing and feeling the impacts of global climate change, and significantly,” US Secretary of State John F. Kerry said in remarks at the Atlantic Council's "Road to Paris" Climate Series on March 12. (Imagelink.com)