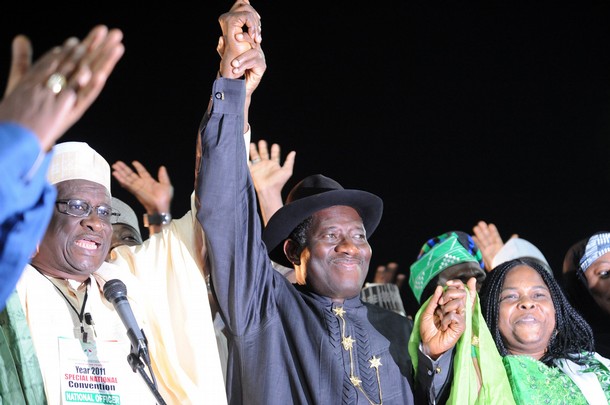 When on Monday evening Attahiru Jega, chairman of Nigeria’s Independent National Electoral Commission (INEC), declared incumbent President Goodluck Jonathan the winner of the country’s presidential election, he modestly declared, “We have done our best to satisfy the aspirations of Nigerians for free, fair, and credible elections.” That the American-trained political science professor managed to do so in the little more than ten months since he was appointed renders the results of last Saturday’s poll—as well as the preceding week’s parliamentary election—a triumph not only for one candidate or party, but a win for Nigeria as a whole.

The last national vote in Africa’s most populous country was described by the then-United States ambassador, John Campbell, as “an election-like event.” Former U.S. Secretary of State Madeline Albright, who monitored the poll, was less diplomatic, declaring that the electoral process had “failed the Nigerian people.” The European Union’s election observers were even more scathing, reporting that “the 2007 state and federal elections have fallen short of basic international and regional standards for democratic elections and the process cannot be considered to be credible.” I personally witnessed every conceivable abuse, including underage voting, voter registration list errors, stuffed ballot boxes, group voting, party observers and police instructing individuals on who to vote for, lack of privacy for voting, lack of results sheets and other materials, falsified results sheets, and early closing of polls in some areas. Despite near-universal condemnation of his “victory,” Umaru Musa Yar’Adua was installed as Nigeria’s president. He died last year and was succeeded by his vice president, Jonathan.

It was the incumbent president who appointed Jega, who had served on the Electoral Reform Commission, to head INEC. The choice has proven to be inspired since, in defiance of all expectations, the electoral panel actually delivered on its promise and gave Nigerians an election which, with whatever its imperfections, probably stands as the most legitimate poll they have had in decades. Approximately 40 million people took part in the vote, with about 22.5 million of them, representing 58.9 percent, casting their ballots for Jonathan, while his closest rival, former military ruler Muhammadu Buhari, won 12.2 million votes, about 32 percent of the total.

As I monitored the voting in the Federal Capital Territory of Abuja as well as in the neighboring state of Nasarawa, especially impressive was the determination of ordinary citizens to cast their ballots and to have those votes counted. Given the somewhat complex mechanics of the Nigerian voting system, voters had to stand in line twice: first to get accredited in the morning and then to actually cast their ballots in the afternoon. As a result, many people spent up to twelve hours queuing in the tropical sun.

While Jonathan has won a decisive victory overall, the voting also underscored the troublingly persistent division between the predominantly Muslim northern part of country and its largely Christian southern half. While the incumbent president, a Christian Ijaw from southeastern Bayelsa state, carried the federal capital as well as twenty-three of the twenty-four states in Nigeria’s “Middle Belt” and south (former anti-corruption investigator Nuhu Ribadu won Osun, in the southwest), the twelve northern states which have adopted shari’a since 1999 were all won by General Buhari, a Muslim Fulani from Katsina state. Officials of the general’s Congress for Progressive Change have, in fact, challenged the results, alleging voter intimidation and fraud. And, unfortunately, protests have subsequently already broken out in several northern cities; a number have even turned violent, including in Kano, where a mob torched the palace of the Emir, the state’s traditional Muslim ruler, who was thought to be close to the president’s People’s Democratic Party (PDP), and in Zaria, where Vice President Namadi Sambo’s family home was burned down.

While the fault lines are, at least on the surface, religious and ethnic, they are also regional and economic. Most of Nigeria’s foreign exchange is derived from the oil and gas reserves concentrated in its southern and coastal areas. In contrast, northern Nigeria is a region characterized by declining textile and other manufacturing industries and an expanding population of unemployed youth, many of whom are easily manipulated by political operators, as is likely the case with the current violence.

One year ago last Friday, when he spoke in Washington at the Ansari Africa Center’s formal launch, Goodluck Jonathan proclaimed, “Nigeria is rising and our rise will be for good of all our citizens.” At the same time, he added a caveat: “Without a pool of accountable public officials in positions of authority, many of the ambitions we have for our country will come to naught and there is no way to win this credibility without ensuring that elections are free and fair.” Having just won an impressive mandate from the voters in what international observers have all hailed as significant step forward for Nigeria’s democracy, Jonathan will now need to ensure that the country’s vast natural and political resources which the West African nation has at its disposal will be used to fuel its growth and development to the benefit of all Nigerians, rather than, as has sadly been the case for most of the last half century, consumed in downward spiral of corruption, internal conflict, and violence.