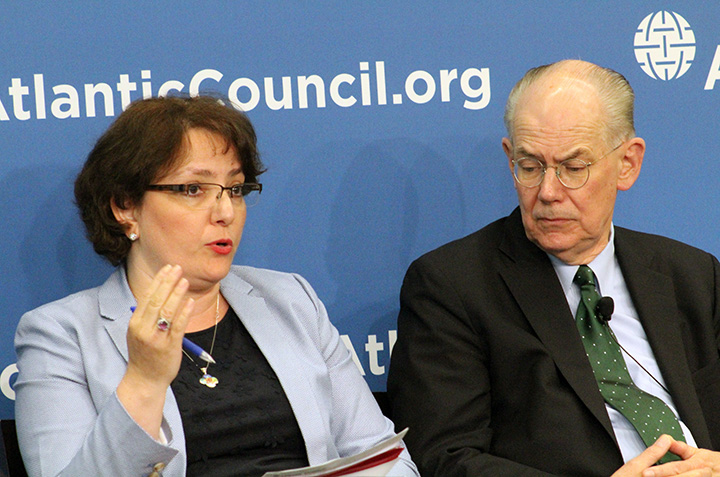 NATO membership for countries in the Balkans and for Georgia is crucial for the stability of Europe and will send a clear signal that Russia does not have a veto over the alliance’s enlargement plans, panelists, including officials from Macedonia and Georgia, said at the Atlantic Council on June 8.

“The accession process into NATO has strengthened not only our military efficiency but also our society and democratic institutions in Macedonia,” said Zoran Jolevski, Macedonia’s defense minister. He spoke at a conference hosted by the Atlantic Council on “The Future of NATO Enlargement and New Frontiers in European Security.”

Greece blocked Macedonia’s accession into NATO at the alliance’s Bucharest summit in 2008 over a controversy rooted in historical dispute. Greece refuses to recognize the full constitutional name—the Republic of Macedonia—of the Balkan state. The Greek government sees the name as an indirect attempt at laying claim to the northern part of Greece, which is also known as Macedonia. NATO has sought a mutually acceptable solution before Macedonia can proceed down the path to accession.

Following Macedonia’s independence in 1991, Greece vetoed the country’s attempts to join the United Nations and imposed sanctions on its northern neighbor.

Macedonia received NATO’s Membership Action Plan in 1999. Jolevski was confident that accession talks for his country will begin at NATO’s summit in Warsaw in July.

“It is a two-way avenue. In one way we are helping NATO and our allies to bring peace and stability in different parts of the world…but at the same time our soldiers who are participating in these missions are gaining valuable skills that can be used in our own country,” Jolevski noted of his country’s partnership efforts alongside NATO.

Accession in the face of Russia

NATO invited Montenegro to start accession talks in December of 2015. The parliaments of all twenty-eight NATO member states, including the US Senate, have to ratify the accession plan. The tiny Balkan nation will then become the twenty-ninth member state of NATO.

“It’s great that Montenegro is being offered membership because it’s a message to Russia and the world that Russia does not have a veto on NATO membership,” said Evelyn Farkas, a senior fellow at the Atlantic Council’s Future Europe Initiative, “and secondly…it’s part of our commitment to spread stability throughout Europe and we have not finished in the Balkans and Montenegro is a big piece of that.”

“[Montenegro’s accession process] is a sign to all the other aspirants that NATO’s door is open,” she added.

Further enlargement of the alliance is widely seen by the international community as a counter pivot toward Russian activity on Europe’s eastern flank—in particular in Ukraine and the Crimea Peninsula.

“As long as we live in a world dominated by what is it that Russia wants or what are Russia’s interests, we are going to be in trouble,” said Tinatin Khidasheli, Georgia’s defense minister, who spoke earlier at the event.

“The major mistake we are making here is that we are basing our policies on fear,” she added.

Georgia, too, is an aspirant NATO member. Following NATO’s Wales summit in 2014, the alliance implemented a set of policies that are designed to set Georgia up for accession talks in the future. Even though Georgia is not a member of the alliance, the country plays an active part in the security dialogue for the region—especially following the Russo-Georgia war in 2008, in which Russian and Georgian troops clashed in the border regions of Abkhazia and South Ossetia.

“Security of my country is very much a fundamental issue for the security of Europe. There is no European peace without Georgia being part of the security architecture. That is the reality today. We are going to keep knocking on NATO’s door,” the Georgian official added.