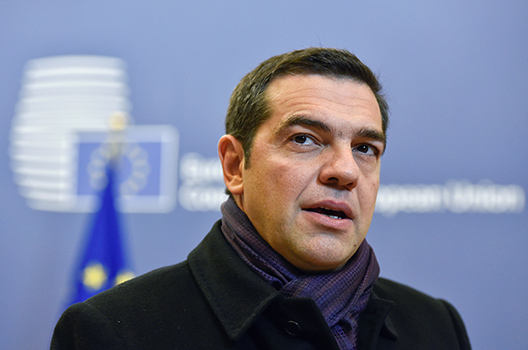 A little less than four years ago, there was a consensus throughout Europe that Greece was Europe’s biggest headache. Athens had driven itself into economic devastation, the argument went, due to its profligate spending and uncompetitive economy and now threatened to unravel not just the European financial system, but the political unity of the European Union (EU) itself, after the election of far-left winger Alexis Tsipras. Greece became Europe’s Achilles’ heel.

What a turnaround it has been. Today, Athens has proven to be a problem solver for the transatlantic community, projecting stability and providing leadership on a vulnerable southeastern flank. Tsipras has moved in a short time from being the bad boy of Europe to now being one of its most celebrated leaders. This transformation has not been easy and, at best, is incomplete given the stagnant economy which very well could cost Tsipras his job. Nonetheless, his government has helped bring Greece back in from the cold. After weathering extraordinary challenges, Greek democracy has emerged strong; Athens, the original source of Western political thinking, can show off this brand with credibility as it heads into competitive elections this year.

Greece’s trouble with its Western friends preceded Tsipras and the financial crisis. The legacy of the brutal civil war, Cold War tensions, and US support of the Colonels’ regime post-1967 had resulted in significant anti-Americanism in the country, stemming in large part from Greece’s political left. In turn, the perceived ambivalence of many Greeks caused many Western policymakers to question the reliability of Athens as a consistent ally. Greek centrist and right-leaning political forces worked hard to keep Greece in the strategic West despite such headwinds. In 1996 and again in 2007, the US embassy in Athens was attacked. Residual support for the Communist Party, close cultural and religious ties with Moscow, and allegations of espionage by Greek agents tarnished Athens’ reputation within the alliance. Indeed, when I worked at NATO, some feared that Athens was the weak link in the transatlantic alliance.

Things only seemed to get worse when Alexis Tsipras was elected prime minister in 2015. His hostility towards the EU and Greece’s western financial backers sent panic throughout Europe that Athens would exacerbate the continent’s economic woes. Syriza’s hard-left politics worried many that Athens might abandon the Western family of nations. Tsipras was prematurely judged as a potential ally of Russian President Vladimir Putin and Washington looked with alarm as his government did not slow the takeover of the port of Piraeus by Chinese investors.

But crucially, the United States did not abandon its Greek ally, and Tsipras, while defending Greek interests vociferously, proved much more politically courageous than his initial detractors predicted. Washington made clear statements throughout the financial crisis sympathizing with the Greek position and pushing Brussels to not punish Greece too harshly in its debt program. Tsipras, for all of the talk of impending doom, did not lead Greece to exit the Eurozone, but instead courageously pushed through a bailout plan, despite its intense economic cost. Greeks experienced a painful 25 percent drop in gross domestic product per capita, but Greece had finally reached a plan to deal with its suffocating debt.

All of this has served Greek interests well, even if work remains. The prerequisite of attracting investment is shedding the stigma of radical politics and economic mismanagement. Investors now want to see more measures to de-risk the Greek financial and business environment, a task likely to be high on the agenda of the next government. Therefore, to leverage this turnaround, Greece still desperately needs greater institutional and regulatory reforms to stimulate a slow-growth economy, to help spark domestic and Western foreign investment, and to foster a more entrepreneurial environment so necessary to create jobs and economic opportunities for the Greek people.

At the same time, Athens unexpectedly found itself on the frontline of another major crisis, as refugees from Syria and the wider Middle East began crossing the Mediterranean to flee conflict. Turkey and Greece nobly bore the brunt of this influx, not succumbing to the same xenophobic panic that marked some of their European partners. For all the talk of European solidarity during the financial crisis, within the EU, Athens bore the heavy load of the migration crisis, often with little support from other capitals.

Athens also demonstrated that it remains firmly committed to its NATO allies, rather than the allure of Moscow. Greece has held the EU line on Russia sanctions after the Skripal poisoning and took a huge step this summer when it expelled four Russian diplomats over attempts to build opposition for the Greece-North Macedonia name agreement.

Finally, Tsipras demonstrated Athens’ ability to project stability and security through the Prespa Agreement with North Macedonia, which ended a twenty-seven-year name dispute. This breakthrough allowed Greece’s northern neighbor to be invited, finally, to join NATO. Tsipras nearly lost control of his government over the controversial agreement, but showed that he was willing to take the steps necessary to position Athens as a constructive leader in the region.

In the wake of the Prespa Agreement, Athens can now help advance the vision of Thessaloniki that all of the Balkans will one day be part of the EU. Indeed, the Prespa Agreement can restore Greece’s influence throughout the Balkans and reconnect Thessaloniki with its historic hinterlands and position the port as a leading commercial gateway into the broader region. Rather than be seen as an obstacle, Greece can play a catalytic role leading NATO and the EU to complete the goal of a Europe whole and free by helping its northern Balkan neighbors on the road to full integration.

Indeed, with Prespa concluded, the United States would be wise to develop its own strategy for the Western Balkans not with Greece as an object of policy, but with Greece as a partner in that policy. Next up on Greece’s diplomatic dance card will be impeding EU decisions on accession negotiations for Greece’s neighbors and finishing the normalization of its relations with Albania.

But Greece and its allies must be wary of Kremlin-linked Russian actors continuing to use the controversy over Prespa to sow division within Greece, the region, and the alliance. Their game is not over, even if they lost the latest battle.

Against this backdrop, Greece is also becoming a key player in energy markets and energy geopolitics. The Trans Adriatic Pipeline (TAP) and the Interconnector Greece Bulgaria (IGB) provide Europe new options for natural gas mitigating the region’s dependence on Russia for gas supplies. Furthermore, the opening of a new liquified natural gas terminal that can welcome US-sourced LNG to the continent bolsters Greece’s role in ensuring a diversified energy infrastructure in the region.

Greece’s geographic location, historic ties, and experience with the refugee crisis also position Athens to play a pivotal role in NATO’s Eastern Mediterranean policy, especially if Cyprus peace talks advance. As Greece is seen as a credible, stable actor in the region, US and UN diplomacy will be inclined to hear out Greek entreaties on how to jump start the Cyprus talks.

Greece is already home to substantial US forces at Souda Bay, among the most important bases in the Mediterranean and a key location for transiting forces eastward into the Black Sea region, the Middle East, Afghanistan, and further afield. Greece is also hosting NATO drones and counterterrorism forces that play a key role in North Africa and can help the Alliance provide security across the wider region.

It has been a long time since Greece has been seen as a provider of solutions, rather than problems. Due to leadership and tough decisions, Greece has transformed itself from Europe’s Achilles’ heel into one of NATO’s more reliable allies.

Tsipras may fall victim to political defeat, but if he does leave office, he will have helped neuter anti-American forces, in turn helping to ensure that Greece and the United States remain close allies regardless of the outcome of Greece’s next elections. Indeed, thanks to the long-standing support of the opposition for close ties to Washington, the US relationship is now above partisan politics in Greece. Thanks in no small part to the US Ambassador to Greece, veteran diplomat Geoff Pyatt, US-Greek relations today are at their apogee. We want to keep it that way.

Hence, we at the Atlantic Council are making an investment in Greece, and the broader region. An Atlantic Council delegation is heading to the annual Delphi Economic Forum gathering this weekend, underscoring deeper US engagement in Greece. While in Athens, Ambassador Richard Morningstar, Chair and Founding Director of the Council’s Global Energy Center, will deliver the annual Prometheus lecture on regional energy security and Distinguished Fellow Ambassador Dan Fried will kick off the Atlantic Council’s Disinformation Week Europe.

Greece has emerged as a steadfast anchor in Southeast Europe. Washington and Athens now share an enduring, common agenda of working together to bolster prosperity and security in Southeast Europe, including kickstarting bilateral economic ties and integrating the remainder of the Western Balkans in the transatlantic community.

Damon Wilson is executive vice president of the Atlantic Council and former special assistant to the president and senior director for European Affairs at the National Security Council. Follow him on Twitter @DamonMacWilson.