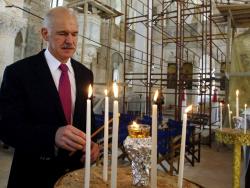 The future of the Eurozone is decidedly hanging in the balance at the moment. The problem isn’t a simple question of economics anymore: everything now is all about credibility, about who does what, and when, and how everyone else reacts.

As the crisis trundles on and on, news that Greek bond spreads have hit ever higher post European Monetary Union records has become such a regular event that the process now seems almost a monotonous one. However, what happened on what we could now call this week’s Greek “Black Thursday” certainly marked a new, and more worrying milestone in the ever evolving crisis. The news this morning that Greece has demanded the activation of the EU-IMF loan – news which apparently took even the EU Commission itself by surprise it seems – only adds to the general sense of confusion that abounds.

The problem we are presented with is not only that Greek 10-year bond yields reached 8.83 per cent, their highest levels since 1998, or that the cost of insuring Greek government debt against default hit a record high of 616 basis points. The really disturbing development was that spreads on government bonds all around Europe’s periphery – including countries like Hungary and Bulgaria – widened sharply, raising heightened concerns that Greek contagion may move from being a mere possibility to becoming a reality. And the cost of protecting peripheral eurozone borrowers against default also hit record levels, with Spain and Portugal touching record highs for their Credit Default Swap prices.

The surge in Greek bonds followed news that Eurostat, the European Union’s statistical service, had revised its estimate of the country’s 2009 deficit to 13.6 per cent of gross domestic product from 12.7 per cent, and the announcement that Moody’s Ratings Agency had downgraded Greek sovereging debt to A3 from A2.

Markets are obviously nervous at the moment, and understandably so, with two issues in the forefront of their minds. In the first place the real level of commitment of core Europe, and especially Germany, to supporting the periphery through several years of difficult and painful structural adjustment is far from clear. On the other, the ability of political leaders in Greece and other affected countries to carry their citizens with them through the sacrifices which will be required to maintain the monetary system intact continues to remain in doubt.

German voters are notably uneasy about lending money to Greece, and a sizeable majority of them are against any form of aid. Reticence on the part of Angela Merkel’s coalition partner also makes obtaining parliamentary backing for the loan difficult, and the FDP senior spokesman on financial questions, Frank Schaeffler, stated bluntly this week that either Greece needed to intensify its austerity plan or it should leave the Euro.

Most observers, however, consider a Greek withdrawal to be only a remote possibility, given that any return to the Drachma would make the country’s debts even less payable. In fact the threat to the integrity of the currency union comes from an altogether different quarter. What is in now increasingly in doubt is the ability of Germany’s political leadership to carry voters with them should either Greece decide to default while continuing with Euro membership, or should other member countries be forced to apply for loans.

At the same time, some sort of Greek default is now no longer simply a theoretical possibility among many others, indeed talk of the inevitability of some form of debt restructuring (albeit voluntary) grows with every passing day. Erik Nielsen European Economist with Goldman Sachs said this week he is expecting Greece to offer some sort of “voluntary debt-restructuring” to creditors over coming months, while JP Morgan issued a research note saying that while such restructuring may not be imminent, the move would make sense given that Greece could be seen as “the sovereign analogue of a ‘bad’ company with a bad capital structure”.

Restructuring is simply a polite word for default, with the difference that it is normally carried out by agreement. The most likely form of restructuring in the present context would be debt rescheduling, whereby short and medium-term debt is converted into a long-term version, as happened with the so-called “Brady bonds” devised by the US Treasury to resolve the debt difficulties of a number of Latin American countries in the late 1980s.

One indication that the ground may be being prepared for some kind of restructuring can be found in the decision reported by German Deputy Finance Minister Joerg that any aid to Greece would come in the form of pooled loans from the euro-zone countries and not through the purchase of Greek bonds. Plans to purchase bonds are “off the table,” he said. This procedure implies that government loans would be strongly guaranteed, while private bond holders would really pay the price for the Greek “rescue”.

At the same time voices are now being raised asking whether it would not be a better idea for Germany, rather than financing more and more loans, simply to put its losses down to experience and go back to the Deutsche mark? According to Joaquin Fels, Chief Global Economist at Morgan Stanley, the Greek rescue measures could “set a bad precedent for other euro- area member states and make it more likely that the euro area degenerates into a zone of fiscal profligacy, currency weakness and higher inflationary pressures over time,” in this case “countries with a high preference for price stability, such as Germany, might conclude that they would be better off with a harder but smaller currency union.”

Evidently such statements can be read as bargaining postures, attempts to get politicians and voters in the South of Europe to focus their minds on the problem in hand, but they can also be read as warnings of what could happen if they do not. At the present time the situation is extraordinarily confused. Greek Prime Minister George Papandreou’s formal request for financial financial support seems to have taken almost everyone completely by surprise although it shouldn’t have, since as I reported in my earlier post the Greek Finance Minister George Papaconstantinou had previously warned that his country could call on loan backup from the EU and the IMF even while talks with the 20 strong EU, ECB and IMF mission were continuing. Actual details of the level of financial support which will be offered remain scant at this point. According to G20 sources who spoke to Reuters, the Greek government have only asked at this point for a first tranche downpayment, to give them working capital to keep going while the talks continue (think of the JP Morgan distressed company talks with the receiver analogy). What is quite striking, however, is how the government let things come to this pass before striking the decisive agreement – evidently they could not hold out till after the German regional elections, and that is another worrying sign. When all is said and done, one thing is obvious, the forthcoming loan will clearly have some kind of super-senior status (which means it would be payable before ALL other creditors – German voters would settle for nothing less), and this implies that it is likely to be existing bondholders, and not EU national governments, who are going to be invited invited to pay for the Greek bailout. How they will react to this realisation is what remains to be seen in the days and weeks to come.

Edward Hugh is a Barcelona-based macro economist who specializes in growth and productivity theory, demographic processes and their impact on macro performance, and the underlying dynamics of migration flows.  This essay was previously published at A Fistful of Euros.  Photo credit: Reuters Pictures.