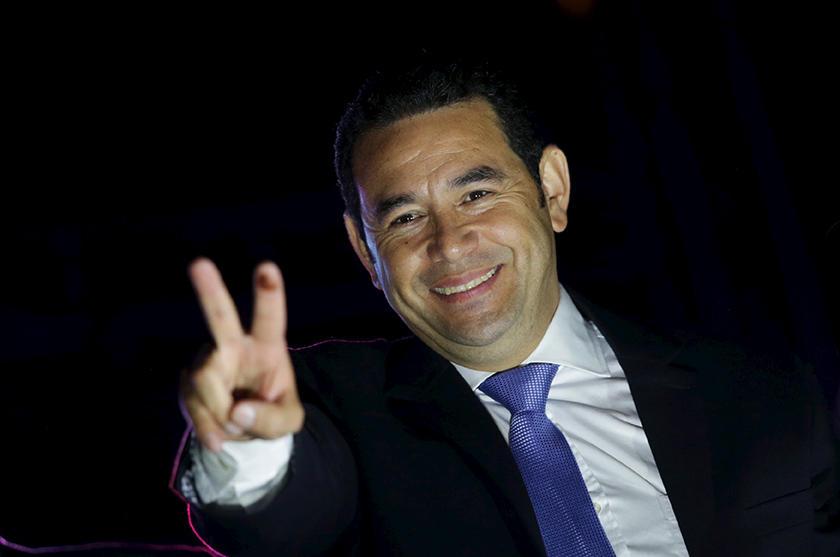 Guatemala’s President-elect Jimmy Morales gestures to supporters after winning the presidential elections in Guatemala City on Oct. 26. Morales, a former TV comedian who has never held office, swept to power in Guatemala’s presidential election after milking public anger over a corruption scandal that deepened distrust of the country’s political establishment. (Reuters/Jorge Dan Lopez)

Jimmy Morales, a former comedian, has won a landslide election victory to become the next President of Guatemala. That was the easy part. Now comes the hard part: governing.

Morales won twice the number of votes than his opponent, former First Lady Sandra Torres, in a runoff election on Oct. 25. He will take office on Jan. 14, 2016.

Morales campaigned on a promise to fight corruption after former President Otto Pérez Molina resigned and was arrested on graft charges in September.

Peter Schechter, Director of the Atlantic Council’s Adrienne Arsht Latin American Center, and Jason Marczak, the Center’s Deputy Director, discussed the Morales’ election and the challenges that lie ahead for the new President in an interview with the New Atlanticist’s Ashish Kumar Sen. Here are excerpts from our interview.

Q: Why did Jimmy Morales win this election by such a landslide?

The question now is how with that level of victory and with that level of heightened expectations does Jimmy Morales govern in a way that he will not end up being a massive disappointment? His party includes a number of the very elite that he claims to be fighting against. So very radical change is not going to be possible because he will bump up against his own constituencies. A country like Guatemala, with such weak institutions and massive social needs, is a very difficult place to run.

Marczak: The Guatemalan people are fed up with the political elite in their country. The resignation and imprisonment of former President Pérez Molina over the summer after months and months of demonstrations in the streets against corruption in his administration has given the Guatemalan people a sense of a new voice that they have never had before.

The Guatemalan people have always felt that the political and business elite are above the law and the resignation of the President showed that the people’s voice can actually bring about change. And the people want more change. They voted for Jimmy Morales because he is an outsider candidate, a former comedian who has never held political office, has little political connections, because they wanted somebody who is a complete break from the establishment. The question is, how can Jimmy Morales really be a complete break from the establishment once he becomes President?

Q: No party has a majority in Congress. Will that complicate Morales’ ability to deliver change and fight corruption as he has promised?

Schechter: The fact that there is no majority points to yet another one of the emergency hand brakes that elites can still pull to slow real change, particularly change in the administration of justice and changes to reduce impunity. The administration is going to have to negotiate with Congress to pass any laws. While he certainly has the benefit of a massive bully pulpit as the overwhelmingly elected new President, I think every American understands the enormous immobilism that exists in Congresses and legislatures throughout the world… because it exists in our own.

Marczak: Jimmy Morales is going to have challenges for a variety of reasons. One is going to be working with Congress across political lines, especially given the fact that he doesn’t have political experience. He is also going to face a challenge in being able to deliver on his campaign promises or being able to articulate a clear vision for Guatemala once he is President.

His campaign platform was somewhat vague on specific details of what his presidency would look like, but it did include certain promises such as giving a smartphone to every child that clearly Guatemala doesn’t have the resources to deliver. Once he becomes President, he is going to have to manage the expectations that people have of him—expectations that he created as a candidate as well as expectations that he didn’t create but that the people inherently have by electing an outsider: expectations that this government will be much more responsive to the people’s everyday needs and desires, and expectations of a complete break from the past. He is also going to have to ensure that the trial of Pérez Molina and other officials from his government doesn’t bring any type of uncertainty to the already-fragile institutions of Guatemala.

Q: What are some low-hanging fruit when it comes to change that he can quickly deliver?

Schechter: There are clearly some things that he can do to promote political reform, to make politicians far more accountable, and to increase the ability of certain judicial offices in Guatemala to be able to have speedier anti-corruption investigations. What happened in Guatemala with the previous President could not have been possible without Guatemala having outsourced a good part of its judicial system to the United Nations in order to be able to prosecute the case against former President. I am sure that the new President is going to get a lot of international cooperation to create institutions that would allow Guatemala to be able to do this on its own.

Marczak: The critical thing for him to announce are additional mechanisms to be able to further support the Guatemalan judiciary. The UN-backed CICIG (Comisión Internacional contra la Impunidad en Guatemala) has obviously been instrumental in getting to the bottom of the corruption scandal, but there are additional measures that need to be taken across the government to prevent such types of corruption from happening in the future. If he can announce additional mechanisms that his administration will take to prevent this type of corruption in  the future that will be welcomed by the Guatemalan people.

With respect to the United States, the US Congress is currently debating funds for the Plan of the Alliance of Prosperity in the Northern Triangle—a plan between Guatemala, El Salvador, and Honduras—to be able to improve security through supporting socioeconomic deliverables as well as crime fighting on the streets. Jimmy Morales is going to have to come to Washington very quickly in his presidency to meet with members of Congress and the administration and convince them that Guatemala under his presidency will be a worthwhile partner in the Plan of the Alliance of Prosperity and that now more than ever is the right time for Congress to double down on its commitment to the Northern Triangle. This landmark effort between the three countries is one that must be given its chance to succeed.