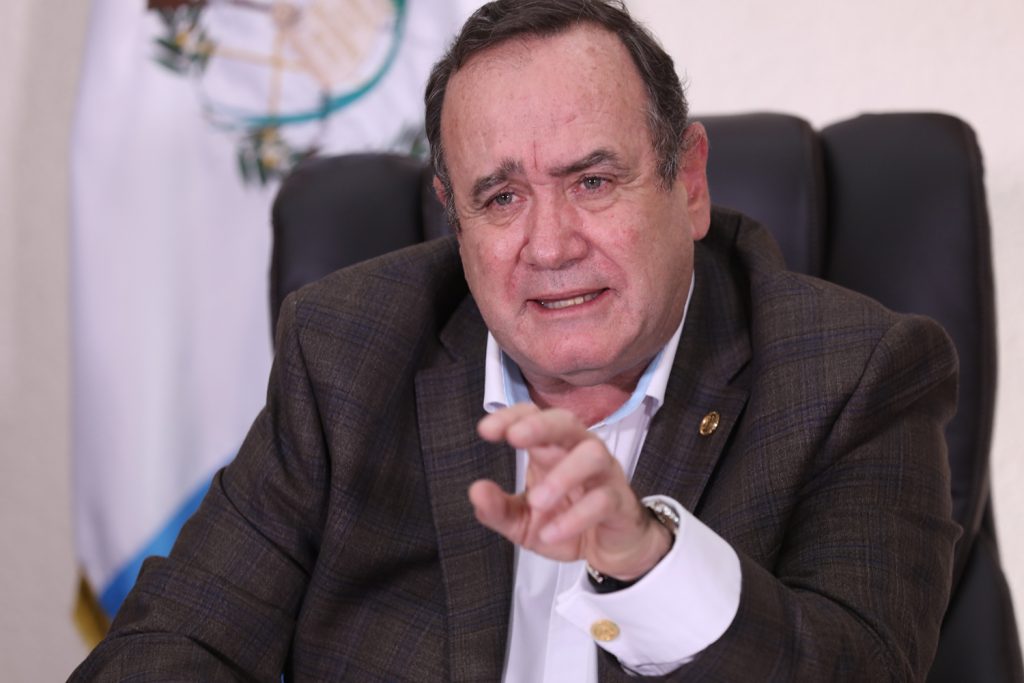 With 17.5 million people, Guatemala is by far Central America’s largest nation. Yet as the COVID-19 pandemic and a worsening migrant crisis ravage his country, President Alejandro Giammattei said that the paucity of aid from Washington shows that “US doesn’t respect us.”

Giammattei, sixty-four, is a former doctor and national prison administrator who suffers from multiple sclerosis. He replaced Jimmy Morales as president on January 14 after winning the second round of the 2019 presidential election, with nearly 58 percent of the vote.

During the campaign, Giammattei promised he’d renegotiate a controversial immigration deal that Morales, his predecessor, had concluded with Washington. Under that “safe third country” arrangement, migrants from neighboring Honduras and El Salvador hoping to win political asylum in the United States must first apply for asylum in Guatemala.

Giammattei said his government continues to have “serious issues” with the Trump administration’s deportation of migrants to Guatemala—many of them sick with COVID-19. “Our hospitals have limited capacity, but now we have to treat these patients infected with a disease that didn’t originate here,” he said. “This creates such a burden for us.”

As of May 21, Guatemala had reported 2,265 cases of COVID-19 and forty-five deaths—fewer than Honduras but more than either El Salvador, Costa Rica, or Nicaragua.

“We were forty-nine days into my administration when the first case of coronavirus appeared. We have now been in office 128 days, and we’ve managed to revitalize certain economic activities,” he said. “We’ve also been able to fight corruption, and that has had a major impact on crime.”

Giammattei said his government took its first coronavirus-related action on February 3 by barring the entry of people coming from China and taking extra sanitation measures at all ports of entry—exactly one month before the first case even appeared in Guatemala.

“Our protocols were focused on protection and mitigation, but we added an intermediate phase: containment. We knew that we’d get hit hard because our healthcare system had been fully neglected for forty or fifty years,” he said.

With only 0.6 hospital beds per 1,000 inhabitants and only a handful of working ventilators, according to the World Health Organization (WHO), Guatemala was clearly not in a position to confront a major pandemic, Giammattei said.

“So far, we’ve rebuilt four hospitals, we’re working on the fifth, and we’re analyzing the construction of a sixth hospital,” he said. “Other countries were telling patients who tested positive to go back home—where they then infected everyone else in their household. We did it the other way around. All positive patients were sent to the hospital.”

Even so, some government agencies did not follow that protocol and told COVID-19 patients to return to their homes, causing a spike in recent weeks.

“In the First World, everybody has their own room, but in Guatemala, 60 to 70 percent of the population lives in poverty and houses usually have only one or two rooms for the whole family, so you cannot demand social isolation at home,” he said.

Giammattei said his government is establishing a “fairly conservative protocol” with regard to releasing coronavirus patients from government hospitals. That’s because “we don’t want to see these patients released without being sure that they’re absolutely cured,” he said.

The president said Guatemala may reactivate the construction sector within the next week or two. It has also plans on enacting massive stimulus programs to rebuild the economy and has already authorized direct payments of six billion quetzales (roughly $780 million) to two million families that would cover roughly ten million Guatemalans, as well as subsidies for energy consumption that will benefit 90 percent of the population.

Giammattei also hopes to lure US manufacturing investment through the refurbishment of major airports, the construction of a gas pipeline, and other infrastructure projects.

“These companies left to China and we want them back,” he said, calling for greater regional economic integration. “If we and our neighbors really became one solid economic bloc just like the EU, by removing borders and customs inspections, we’d be able to further exploit our natural resources and the marvelous labor we have in Central America, only two hours and twenty minutes by air from Miami.”

But first, COVID-19 will have to be defeated—and that must take precedence, he said.

“A few months ago, nobody in the country actually believed the severity of the disease. But Guatemala was one of the first countries in the world to require masks,” Giammattei said. “Later on, the WHO established that masks were mandatory. Then everybody who thought I was exaggerating realized I was right.”

Even so, he warned, Guatemalans will have to accept the idea of wearing face coverings in public—possibly for the next two or three years.

“We will have to get used to the disease,” he said. “If we open a given activity, such as public transportation, of course we’ll have more cases—so we need a protocol to address that spike.  Once we see that the disease has peaked, we’ll need to step on the gas to reactivate the economy. That’s why the reopening has to be in phases.”

Guaidó’s national emergency government presents a viable solution to tackle the coronavirus pandemic, Venezuela’s humanitarian crisis, and the dictatorship that has decimated the country.

Image: President Alejandro Giammattei, broadcasts by national media on the new measures that will be taken against the coronavirus in Guatemala City, Guatemala on May 20, 2020. (Latin America News Agency via REUTERS)