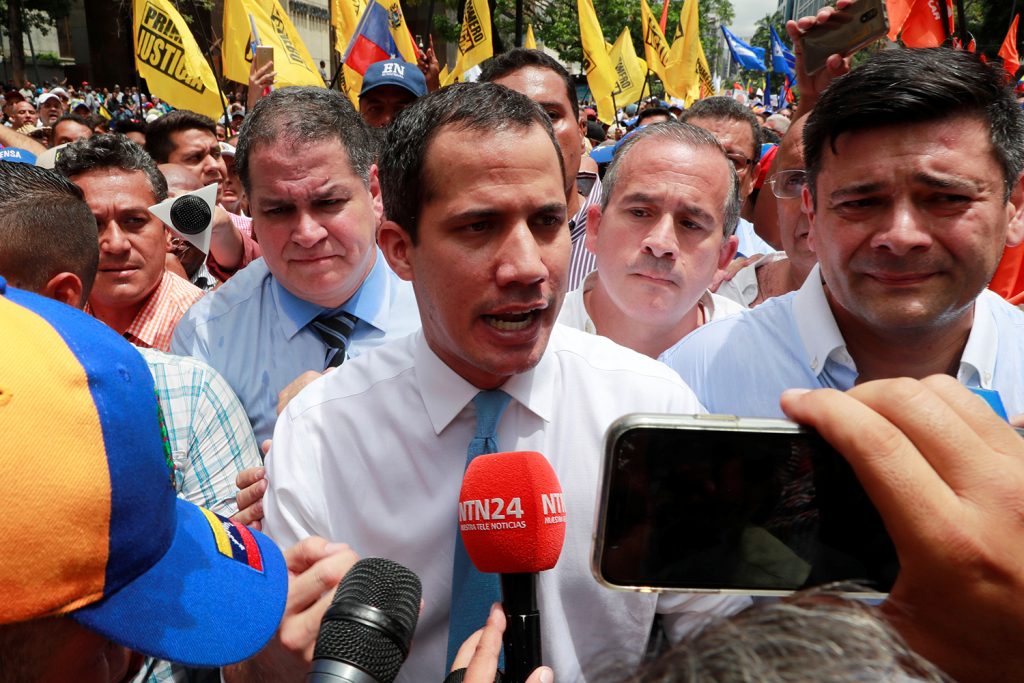 For crisis-stricken Venezuela, the coronavirus pandemic has been apocalyptic.

The country’s health care system—depleted after seven years of recession—is at the verge of collapsing. The global oil price drop has left Venezuela without an income. National production of gas has fallen to zero, and there is no means to transport food and other basic necessities throughout the country. After an arduous journey back home, thousands of Venezuelan migrants are locked up at quarantine centers which lack food and basic hygiene.

Simultaneously, the Trump administration has ramped up pressure on the Maduro regime, announcing on March 26 an indictment against Nicolás Maduro and fourteen current and former members of the regime on charges of narco-terrorism. Three days later, the United States doubled down by announcing a “Democratic Transition Framework for Venezuela”—proposing to lift sections if a transitional government is created without Maduro or interim president Juan Guaidó. The framework also proposes a new, independent National Electoral Council, an independent Supreme Court to replace the current one, the release of all political prisoners, and the entry of humanitarian aid into the country.

While the Maduro regime rejected the proposal and attempted to take control of the narrative by—once more—antagonizing the United States, Venezuela’s interim government, the Lima Group, and the European Union supported the framework and the subsequent lifting of sanctions. On March 28, Guaidó announced his proposal for an emergency government to meet Venezuela’s complex humanitarian emergency and to establish free and fair elections. The regime has not supported Guaidó’s proposal—which includes representation from all actors across the political spectrum—and has chosen to block humanitarian aid organized by the interim government. Starvation has led Venezuelans to protest despite quarantine.

Certainly, as the coronavirus spreads inside the country’s borders, Venezuela is at risk of facing a “hunger pandemic.” According to the World Food Programme’s (WFP) Global Report on Food Crises, Venezuela is the only one of the five countries most at risk of famine that have not been hit by armed conflict or environmental catastrophes. Undoubtedly, Venezuela’s complex crisis is man-made: the consequence of laws, policies, and regulations being abused in the interest of a criminal enterprise.

Nowhere is Maduro’s usurpation of power more evident than in his handling of the coronavirus. The lack of transparency on infections and fatalities obscures a much darker reality, but this should come as no surprise. Freedom of the press has been threatened for more than a decade under Maduro and his predecessor, Hugo Chávez. Today, the regime’s media apparatus consists of not only total control over the country’s communication environment but also the intimidation, harassment, and prosecution of human rights defenders, independent media outlets, and civil society organizations. Independent journalists, medical workers, and opposition politicians speaking out on the pandemic have been intimidated and persecuted by the regime, as was the case of Darvinson Rojas, arrested on March 21 for tweeting about extraofficial coronavirus cases.

Guaidó has been clear regarding the severity of Venezuela’s humanitarian crisis and the precarious conditions of its health system. On April 23, he highlighted the country’s susceptibility to COVID-19 by disclosing that nurses earn a meager two to three dollars per month, 83 percent of Venezuelans do not have constant access to water, and that the public health system has only 300 ventilators. Guaidó, who has been laser-focused on addressing the spread of coronavirus in Venezuela, revealed the interim government it has provided $100 bonuses to doctors and nurses and installed a teleconsultation system that 30,000 people have used, despite the regime’s attempts to block the line. Guaidó has stressed several times, however, that humanitarian aid and the financing of multilateral organizations are critical to addressing the crisis. The Maduro regime has been unable to mobilize either.

On March 15, in a letter to International Monetary Fund Managing Director Kristalina Georgieva Maduro requested $5 billion from the Fund’s Rapid Financing Instrument (RFI) to tackle the virus. While the Fund declined to provide the Maduro regime with funding on the basis that the regime lacks international recognition, Guaidó has secured $1.2 billion from multilateral organizations to address the emergency and assign direct resources to families if the national emergency government is formed.

In the coming weeks, Venezuela could have the highest number of COVID-19 infections in the region. The regime will continue to deny the severity of the crisis, but millions are at risk as the pandemic is exacerbated by Venezuela’s complex humanitarian crisis and shortages. While COVID-19 can serve as a catalyzer for a long-awaited democratic transition in Venezuela, the regime has used the pandemic tighten its unconstitutional grip on power.

Guaidó’s national emergency government presents a viable solution to tackle the coronavirus pandemic, Venezuela’s humanitarian crisis, and the dictatorship that has decimated the country. The interim government’s proposal can save the country from an unprecedented humanitarian catastrophe, by opening a channel for the immediate entry of medical supplies and food, the allocation of money for citizens most at risk, the construction of wells to supply water for hospitals, and the re-establishment of governability and reconciliation in the country.

Image: Venezuela's National Assembly President and opposition leader Juan Guaido, who many nations have recognised as the country's rightful interim ruler, talks to the media as he takes part in a demonstration in Caracas, Venezuela March 10, 2020. REUTERS/Carlos Jasso