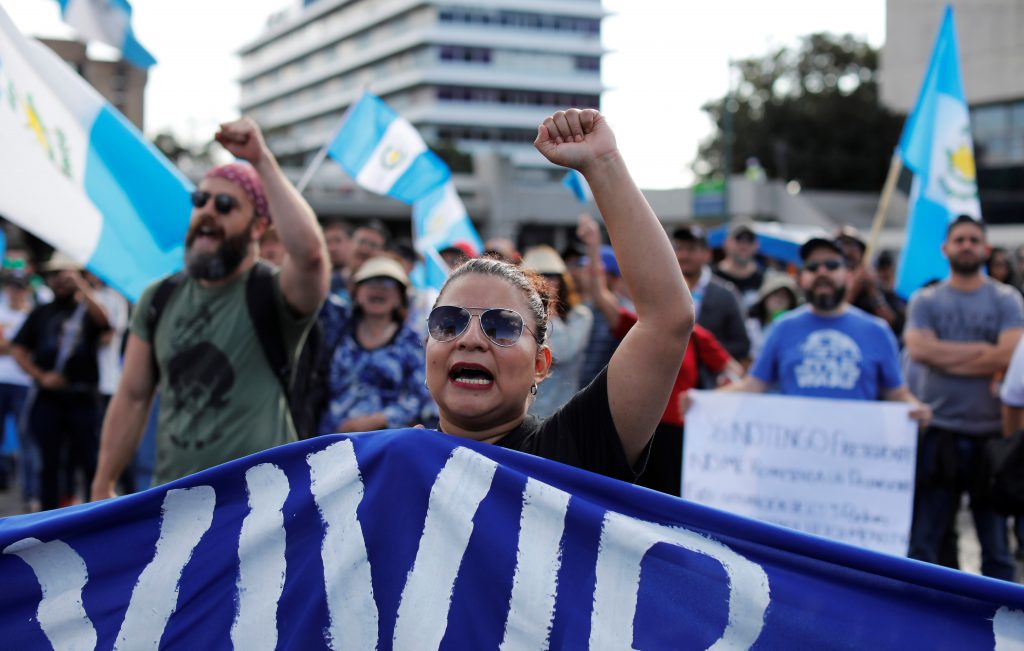 Demonstrators take part in a march to protest against the decision of Guatemala President Jimmy Morales to end the mandate of the U.N.-backed anti-graft commission (CICIG), in Guatemala City, Guatemala, January 12, 2019. (REUTERS/ Luis Echeverria)

Since the conclusion of its civil war in 1996, Guatemala has struggled to root out corruption within its public institutions. After prompting by human rights organizations, in December 2006 the United Nations (UN) and the administration of President Oscar Berger finalized terms for the International Commission Against Impunity in Guatemala (Comisión Internacional contra la Impunidad en Guatemala – CICIG). Despite the successes of this exemplary anti-corruption initiative, tensions between the CICIG and Guatemalan political elites prompted Guatemalan President Jimmy Morales to not extend the commission’s term past its September 3, 2019 expiration date. The election of former prison director Alejandro Giammettei, a vocal CICIG opponent, as the nation’s next president on August 11, 2019 further cemented the UN initiative’s fate. Without a doubt CICIG’s impending departure is a notable blow for regional corruption crusaders. As result of CICIG, however, civil society in Latin America is more determined than ever before to pursue political accountability and champion the fight to address impunity.

CICIG: An Exemplary Initiative with a Tumultuous History

As defined by its mandate, CICIG is empowered to identify clandestine criminal actors, collaborate with the government to dismantle these organizations, and support the adoption of anti-corruption policies. Even though sole prosecutorial authority lies with the Guatemalan attorney general, CICIG can influence judicial proceedings by filing criminal complaints, and offering technical advice and policy recommendations.

CICIG has assisted the Public Ministry of Guatemala in more than a hundred cases and secured over three hundred convictions. Of its many accomplishments, the 2015 La Linea case, which resulted in the indictment of President Otto Pérez Molina, is the Commission’s crowning achievement. An October 2018 International Crisis Group report highlights that “CICIG’s justice reform activities since 2017” have yielded an average five percent annual drop in the murder rate in Guatemala, compared to a one percent average decline for the rest of the region. Due to its successes, the Commission has garnered overwhelming public support and international respect.

Following President Otto Pérez Molina’s indictment, television comedian Jimmy Morales was elected president. Initially a CICIG supporter, in April 2016 Morales extended the Commission’s mandate. Persistent scandals involving Morales’ family members and associates, however, saw his approval rating drop from eighty-two percent to an abysmal nineteen percent by the end of his first year in office. After the focus of CICIG investigators shifted from his associates to Morales himself, the relationship between the Commission and the president deteriorated. Morales claims that the Commission does not act in accordance with Guatemalan law and frequently abuses its investigatory powers. For this reason, he decided not to renew CICIG’s mandate beyond September 3.

As the Commission’s end date approaches, voters took to the polls on August 11, 2019 to participate in Guatemala’s second round presidential runoff. While Alejandro Giammettei of the conservative VAMOS party won the presidency, defeating former first lady Sandra Torres, it is irrefutable that the real loser in this election is the Guatemalan fight against corruption. President-elect Giammettei was investigated by CICIG in 2010 over alleged extrajudicial killings in the Guatemalan prison system while he was director. Giammettei, who was acquitted of all charges, has openly voiced his desire to see CICIG end, dubbing the initiative a “black campaign.” Even though Guatemalans and international observers yearned for a new corruption crusader to emerge from this heated electoral race, the result has left activists with little hope for a CICIG Hail Mary.

While CICIG prepares to draw its last breath, the Commission’s impact on the fight against corruption will live on. Due to the success of CICIG, public commitment to end impunity throughout Latin America and the Caribbean is stronger than ever, with seven out of ten residents believing that ordinary people must play a role in this fight. A recent, region-wide survey found that citizens in seven countries identified corruption as the first or second most pressing issue for their nation: Colombia, Peru, Brazil, Mexico, Paraguay, Dominican Republic, and Bolivia.

Evidence of new, public sector leadership is already present throughout the region. In June 2015, a two hundred-million-dollar corruption scandal within the Honduran healthcare system (Instituto Hondureño de Seguridad Social—IHSS) prompted widespread protests and demands for a “CICIG-like mechanism in Honduras.” Allegations that Honduran President Juan Orlando Hernández accepted funds from drug traffickers during his 2013 presidential campaign prompted massive protests throughout Tegucigalpa and demands for his resignation. When El Salvador President Nayib Bukele delivered his inaugural address on June 1, 2019 cries for “CICIES! CICIES!” could be heard in the crowd as Salvadorans demanded their own version of CICIG. Bukele, the anti-corruption candidate who garnered fifty-three percent of Salvadoran votes, recently declared on Twitter his intention to establish a CICIES within his first 100 days in office. While it remains to be seen whether the Bukele administration will make good on its promises, Northern Triangle citizens have made clear that they will no longer sit idly by and wait for the issue of corruption to resolve itself.

Commitment by civil society actors to address rampant institutional dishonesty is by no means limited to Northern Triangle nations. Following increased public demand for anti-corruption reforms, three Andean nations— Ecuador, Colombia, and Peru—held public referendums in 2018. The Ecuadorian publicoverwhelmingly approved constitutional amendments that eliminated indefinite reelection and barred individuals convicted of corruption from running for office. In Colombia, ninety-nine percent of votes were cast in support of seven proposed anti-corruption measures. Recent commitment by the Peruvian Congress to pass reforms agreed to as part of the nation’s referendum only came to fruition after prolonged anti-corruption protests. Elsewhere in Latin America, Chile now sits as a regional leader in the fight against impunity after the decline of CICIG. The ascension of Chile is largely thanks to low public and media tolerance for corruption that prompted then-President Michelle Bachelet to pursue major societal reforms starting in 2014.

Although the measuring stick for anti-corruption initiatives in the region, CICIG, is nearing its end, the fight against corruption in Latin America will continue. The Guatemalan commission has awoken the general public who will no longer remain silent as crooked politicians continue to enrich themselves at the expense of their constituents. While current anti-corruption developments are largely separated by national borders, as Latin American societies advance their calls for institutional change the formation of a united, transnational corruption crusade is an exciting prospect for the region. In the wake of CICIG, everyday Latin Americans are poised to further demand political accountability and advance efforts to reclaim their democracies.