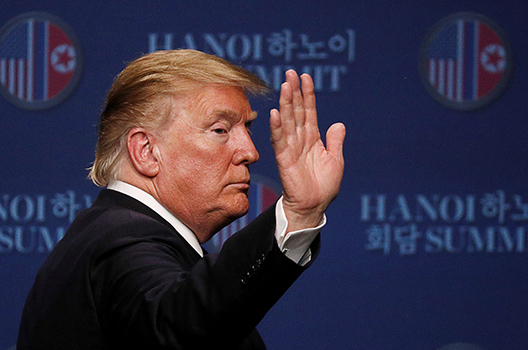 It’s disappointing that a deal was not reached in Hanoi, but it’s good that US President Donald J. Trump walked away rather than signing a one-sided agreement.  Agreeing to a total lifting of UN sanctions in return for only limited steps on denuclearization—closure of the Yongbyon facility— would have done nothing to reduce the North Koreans’ nuclear weapons and infrastructure, making the task of real denuclearization even harder.

Dismantlement of the Yongbyon facility, the main production site for the North’s plutonium and enriched uranium for nuclear weapons, would be an important achievement, but it would not shut off the North’s fissile material production completely.  The North has other facilities, some clandestine, in addition to Yongbyon, as Trump pointed out.  Moreover, dismantling Yongbyon would have left untouched the North’s existing stockpile of fissile material, warheads, ballistic missiles, and their associated production facilities—all of which continue to pose a real and growing threat to the United States, its allies, and the entire Northeast Asia region.

The North Koreans, not for the first time, overplayed their hand, hoping that Trump’s eagerness for a deal would persuade him to override his advisers and effectively accept North Korea as a de facto nuclear weapons state.  This was the nightmare scenario of US experts and US allies in Seoul and Tokyo, who will now breathe a collective sigh of relief.

But Trump has to feel personally embarrassed as well, having predicted an “even greater success” than he believes he accomplished at Singapore.  He needs to face the reality that he grossly misjudged Kim Jong-un’s desperation for economic support, when for North Korea this has always been more about acceptance by the international community and survival of the regime.

We can only hope that both sides will recognize that personal rapport between the two leaders, while a valuable ingredient for talks, cannot substitute for the complex negotiations over the details of denuclearization and verification that must precede any meaningful agreement.  In the meantime, the United States should do all it can to rebuild its leverage by shoring up the international sanctions regime.

The details of the package left on the table in Hanoi have yet to emerge.  It appears that the sides were discussing a political declaration on the end of the Korean War, the first step toward a peace treaty; the opening of diplomatic liaison offices as a step toward the eventual opening of embassies; waivers of sanctions on inter-Korean economic projects, such as a reopening of the Mount Kumgang resort; and an extension of the North Koreans’ moratorium on weapons and missile testing—all in return for dismantlement of Yongbyon and, possibly, other facilities.

It is not clear if the sides agreed on a definition of “denuclearization of the Korean Peninsula” that would commit North Korea to the full, verifiable elimination of all its programs and facilities without undermining the US-South Korean alliance.  This remains essential.  Evidently, the United States agreed to defer a declaration by North Korea with an inventory of all elements of its nuclear program to be eliminated; this, too, cannot be delayed much longer if denuclearization is going to be truly “full, final, and verifiable.”

It is good that the two leaders parted on amicable terms and left the door open to follow-on discussions.  Both leaders will need to reflect on their tactical misjudgments going into the Hanoi meeting.   Kim should empower his negotiators to engage in the serious negotiations at the expert level that he sought to avoid prior to this week’s summit and before last year’s Singapore summit as well.   Trump should instruct his team to re-engage quickly with Pyongyang, after consulting thoroughly with US allies and with China and Russia, who can help increase US leverage on Pyongyang if we play our cards right.  Trump would be wise to hold off on scheduling a third summit until the outlines of a deal are much clearer than they were before Hanoi.

Trump deserves two cheers for reducing tensions with Pyongyang and getting closer to a worthwhile deal than anyone would have predicted.  By walking away from the table, he has improved the chances of a better deal down the road—but only if he has the patience for the tough negotiations that lie ahead.  We still do not know if Kim will ever agree to full denuclearization.  But continued diplomacy is the way to put him to the test.

Alexander Vershbow is a distinguished fellow with the Atlantic Council’s Scowcroft Center for Strategy and Security and a former US ambassador to South Korea, NATO, and Russia. Follow him on Twitter @ARVershbow.