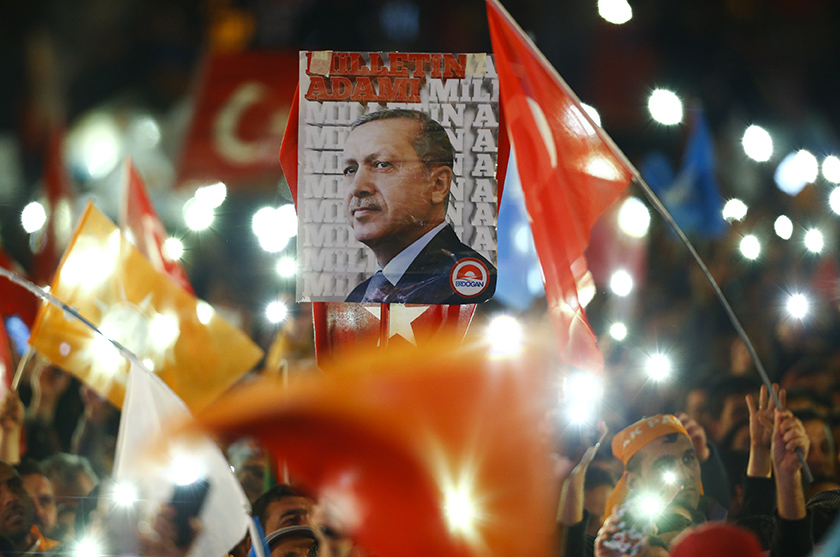 Turkey’s entry into the US-led coalition against the Islamic State of Iraq and al-Sham (ISIS) last summer was marked by Turkish airstrikes on Kurdish militias—a departure from the coalition’s mission. In November, Turkey shot down a Russian jet that it said had violated its airspace. Turkey is now involved in a dispute with Iraqi Prime Minister Haider al-Abadi over the presence of Turkish troops at a base in northern Iraq.  Has Turkey become a distraction in the war on ISIS?

Aaron Stein, a Senior Fellow in the Atlantic Council’s Rafik Hariri Center for the Middle East, discusses the genesis of Ankara’s dispute with Baghdad and Turkey’s role in the anti-ISIS coalition in an interview with the New Atlanticist’s Ashish Kumar Sen. Here are excerpts from the interview.

Q: Turkish President Recep Tayyip Erdoğan has said that an ISIS attack this week at Bashiqa vindicates the presence of Turkish troops at the base in northern Iraq. When it comes to the Turkish troop presence in Iraq, is Turkey in compliance with international law as Erdoğan maintains?

Stein: The attack on Bashiqa this week was the third time since December that ISIS has attacked the base. The previous two attacks were with long-range mortars. This time it appears to have been a little more serious and President Erdoğansaid eighteen ISIS fighters were killed.

The issue of international law is difficult because there are conflicting stories from the Iraqi side—that the Turkish troops were never invited in—and from the Turkish side—that they were. The truth is somewhere in the middle.

The base was established under the direction of the former Governor of Mosul, Atheel al-Nujaifi. The Kurdistan Regional Government (KRG) sanctioned its expansion. This gets into Iraq’s internal politics of who has say over what areas. The base is actually in disputed territory, so technically it falls under Baghdad’s control, but with the war against ISIS the KRG effectively runs it now.

Q: Can the KRG invite foreign troops into Iraq?

Stein: Ideally, this is something that would be settled in Baghdad, but the facts are what they are on the ground. Turkish troops have been in northern Iraq since the 1990s. Their presence has been ostensibly aimed at the PKK. [Editor’s note: The Kurdistan Workers’ Party, or the PKK, is considered to be a terrorist organization by Turkey as well as the United States.]The difference with the presence at Bashiqa is that it is not aimed at the PKK. It is part of a mission to train the militia allied with the former Governor of Mosul [al-Nujaifi] who was impeached for, among other things, coming to Washington and asking to have arms shipped to Sunnis directly without going through Baghdad. Eighteen Turkish trainers have been at Bashiqa since March and ostensibly Turkey was going to increase the number of troops to protect its trainers.

Q: What impact has the dispute between Turkey and Iraq had on this training mission?

Stein: The training is ongoing, but I think it is important to note that this is not part of the formal coalition [that is fighting ISIS]. It is outside of Baghdad’s control. The concern in Baghdad, aside from the Sunni-Shia political divisions, is that this is the training of what is basically an independent militia.

The idea behind the militia was that they would be the hold force in Mosul. So after the coalition and Iraqi security forces cleared Mosul of ISIS fighters these guys would go in and provide the policing forces. However, as of a couple months ago things may have changed as the training was considered to be substandard and Baghdad wasn’t allowing the Turks to send weapons. So these men were training for three weeks with weapons that the Nujaifis bought on the black market, and then they were being sent home and basically had a cell phone tree—they were going to be called into action, but they didn’t have any weapons.

Q: Has the rift between Iraq and Turkey become a distraction in the war on ISIS?

Stein: I wouldn’t call it a distraction, but I think it has made things very difficult for Prime Minister Abadi. It gives credence to his opponents, particularly from the Shia militias, to attack him politically. He already is a weak figure with no real base. He is trying to execute a war against ISIS, and at every turn his enemies are trying to undermine him so that they can take power themselves, or at least try to carve out their own base. These Shia militia leaders have used the Turkish deployment to attack the Prime Minister, so he has to walk a very fine line. He has to take a very hard line against the Turks, which is easy, but there is not much he can do because this is basically in KRG-run territory and Turkey is a far stronger country.

Turkey has been looking at the situation in Iraq and has growing concerns about the marginalization of certain political actors and the poisonous role that Iran plays in undermining Iraqi state institutions. Turkey is trying to create a buffer zone of its own sphere of influence, basically through parts of the KRG and into Nineveh province where this base is situated.

Q: Turkey’s participation in the anti-ISIS coalition appears to be dogged by controversy. First with the Turkish airstrikes on Kurdish groups, then with the downing of the Russian jet, and now this rift with Iraq. Is Turkey a helpful partner in the coalition?

Stein: I think so. The biggest thing Turkey has going for it is that it opened its air bases to the US coalition. Incirlik has since been used as a hub for drone strikes and surveillance on ISIS targets in northern Syria and presumably in Iraq. Its footprint is growing. The Germans are putting in six aircraft to participate in airstrikes. Turkey has joined in the strikes against ISIS since it joined the coalition in July.

Turkey is also taking border security far more seriously than it was a year ago. They had made efforts to try and crack down on the flow of people into ISIS territory, and you do see that reflected in statements among Turkish ISIS fighters about how much more difficult it is to get across the border.

Turkish strikes against the Kurdish targets are against the PKK. There has been some limited shelling—artillery or machinegun fire, but no airstrikes—against the YPG (the Kurdish People’s Protection Units). For now, Ankara has essentially de facto recognized the difference between the YPG, the PYD [Editor’s note: The Democratic Union party, or the PYD, is the YPG’s political arm.] and the PKK. It’s a fragile arrangement and contingent upon the YPG and PYD following Turkey’s red line of not moving west of the Euphrates.

The interesting thing is that in the past week or two, the Syrian Democratic Forces (SDF), of which the YPG is a dominant player, have crossed west of the Euphrates and they do appear to be getting coalition support, and that coalition is based out of Turkey. The deep, dark secret in Turkey that has been revealed by coalition spokespersons is that US jets flying out of Turkish air bases do support the Syrian Democratic Forces and the SDF is primarily the YPG.

Q: Iraqi as well as Russian officials have accused Turkey of facilitating ISIS’ smuggling of Iraqi and Syrian oil, and its sale on the black market. There are also accusations that high-value ISIS fighters regularly receive treatment in Turkish hospitals. Is there any truth to these accusations?

Stein: The Russian claims are basically propaganda. The smuggling trade along the Turkish-Syrian border is as old as oil has been pumped inside Syria. There is no doubt that some oil that is pumped in ISIS areas is smuggled into Turkey. It is largely through middlemen. It is pumped in ISIS-controlled areas, ISIS then sells it to middlemen who refine it and ship the crude diesel into Turkey. It is minimal.

In the past year, Turkey has been trying to interdict refined petroleum products that are coming across its border. More military checkpoints have been set up. It is not perfect, but it is better than it was in 2013 and 2014.

I am also sure some Syrian oil gets traded across in Iraqi Kurdistan and some ends up in Iran. Turkey is not unique in this and I don’t think they are facilitating the ISIS oil trade in any way, shape or form.

As for fighters being treated in Turkish hospitals, there is no doubt that all sorts of fighters are being treated in Turkey. During battle for Kobane there were credible reports that both sides were getting help in Turkish hospitals. It is important to emphasize that it is chaotic down there. Ambulances just stream toward the border and collect the wounded and bring them back to Turkey. That said, it has become more difficult to get into Turkey. You need a Syrian passport to go back and forth. The number of people crisscrossing has decreased considerably in the past few months.

A big change is that when Turkey joined the anti-ISIS coalition they were co-chairs of the foreign fighter task force. They did take that role seriously and began to look at ways to increase their interdiction of foreign fighters.

Image: People wave flags and hold a portrait of Turkish President Recep Tayyip Erdoğan as they wait for the arrival of Prime Minister Ahmet Davutoğlu in Ankara, Turkey, on Nov. 2. Davutoğlu described the outcome of the Nov. 1 general election, which swept his Justice and Development Party (AKP) back to a parliamentary majority, as a victory for democracy. (Reuters/Umit Bektas)