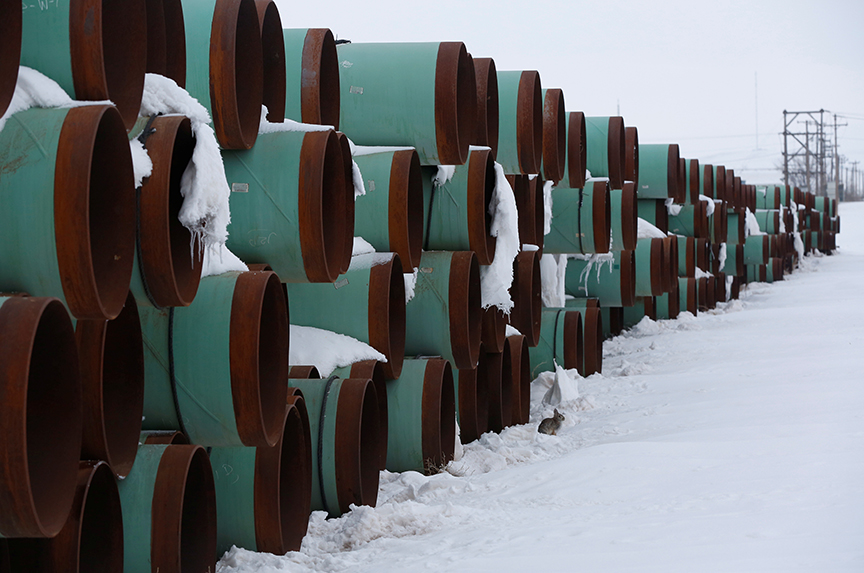 US President Donald J. Trump’s new actions intended to expedite approval of energy and infrastructure projects were hailed by industry groups and decried by environmentalists.   If those actions are implemented in ways that cut regulatory or procedural corners, they likely will slow down infrastructure development by increasing the risk of successful court challenges and trade disputes.

If the agencies reviewing Dakota Access and Keystone XL pipelines do not take the time to provide justifications for their recent decisions on those projects—influenced by Trump—courts may invalidate pipeline approvals. Implementing explicit local content requirements for steel in pipelines could embroil the United States in trade disputes.  Further, the administration’s memorandum to expedite federal infrastructure review and permitting creates uncertainty about the application of a more carefully thought out process Congress established in 2015.

Trump signed a memorandum designed to reverse the Army Corps of Engineers’ decision to withhold the last permission the Dakota Access Pipeline (DAPL) needed to complete construction until it undertook additional review of an alternate route and conducted additional tribal and public engagement by preparing an environmental impact statement (EIS).

The Army Corps has now rescinded the environmental review and granted the easement to those constructing the pipeline, citing Trump’s directive as its basis for action.  The reviewing court has denied a request for a preliminary injunction from the Standing Rock Tribe. While the court did not rule on the tribe’s motion for partial summary judgment, there is still some risk the court could halt or delay operation of the pipeline and order the army to proceed with more environmental review.

The main issue with the army’s decision is that while an agency can change its mind about a policy decision, that agency must provide a reasoned justification for that change, particularly when it is changing its determinations about the underlying facts and circumstances of an issue. The army should have explained why there was a basis to change its mind about producing an EIS before the comment period on scoping for the EIS had finished. While the army’s analysis in support of reversing course went over the procedural history of the environmental review, it provided no explanation for changing its decision to conduct an EIS, however, other than referring to the president’s memorandum. Court cases indicate that a change in administration itself is not a reasoned justification for changing an agency’s decision about the underlying facts and circumstances of that decision.

If the court finds the army’s change in decision to be arbitrary and capricious, it could order an EIS to be completed and may order pipeline operations be halted pending the completion of that EIS. In the rush to move forward immediately after the inauguration, the administration may have slowed down DAPL’s progress.

This accelerated timeline significantly increases the risk that a court could block any decision to grant Keystone XL a permit.

First, despite the sixty-day time limit in the memo, the US Department of State needs to follow the same considerations that the army must follow in DAPL to ensure that any change in its decision is supported in the record or it will face legal challenge that its actions are arbitrary and capricious. The State Department would have an additional legal defense in court that is not available to the army in DAPL because two out of three district courts that have considered previous presidential permits have found the permits unreviewable.  There is no guarantee that subsequent courts will follow those precedents, however, and if the court reviewing this action does not it will judge State Department actions as arbitrary and capricious.

Second, one of the key decisions that the State Department will need to make in that process is whether there is a change in circumstances that would alter the environmental impacts of Keystone XL described in the supplemental environmental impact statement (SEIS).  Litigants could assert, at minimum, that the collapse in oil prices since the SEIS was concluded may change the SEIS conclusion that Keystone XL was unlikely to affect production and thereby greenhouse gas (GHG) emissions from the oil sands.

Third, the State Department has previously stated that it could not adequately evaluate the impacts of Keystone XL without a final approved route in Nebraska.  TransCanada will not complete the process in Nebraska for at least several months, well after the sixty-day deadline for the department to make a decision.  The department will need to justify why it has changed its consideration of the facts and can now adequately evaluate the environmental impacts of the pipeline without a settled route in Nebraska.

Fourth, the president’s suggestion that he might impose additional conditions could make the project uneconomic. While the administration has stated that it will not require the pipeline to be constructed from US steel, in the current low-oil-price environment even more modest additional conditions could challenge the project’s economics. TransCanada has agreed to temporarily suspend its $15 billion North American Free Trade Agreement (NAFTA) claim against the United States, but it has not yet dropped the claim. If it does decide to pursue the $15 billion NAFTA claim instead of complying with uneconomic additional conditions, TransCanada could cite the imposition of conditions by the current administration to buttress its claims that the United States has treated the company unfairly and arbitrarily.

Trump also signed a memo directing Secretary of Commerce Wilbur Ross to develop a plan under which pipelines in the United States are required to use materials and equipment produced domestically. As with the other memoranda, this one leaves the hard work to the agency in question, and Ross will face significant challenges in crafting a plan that avoids creating additional legal uncertainty in a World Trade Organization (WTO) challenge or harming US industry.

Any plan that supports using US steel and equipment in pipelines will need to be carefully designed to avoid being invalidated at the WTO. In addition, LCRs generally harm the economy of the country implementing them by increasing costs in the economy as a whole and harming international competitiveness.

The most unusual of Trump’s memoranda is the one expediting reviews of infrastructure permits.  The memorandum creates a process for expediting permitting reviews headed by the chair of the Council of Environmental Equality (CEQ). The memo, however, does not describe how it relates to existing measures to streamline infrastructure review processes, most importantly the 2015 Fixing America’s Surface Transportation (FAST) Act. The bipartisan FAST Act provides authority to an interagency Federal Infrastructure Improvement Steering Council, controlled jointly by the Office of Management and Budget (OMB) and CEQ, devoted to streamlining federal permitting reviews.

In contrast to Trump’s memo, the FAST Act takes a comprehensive approach to addressing permitting delays. OMB’s inclusion in the process is important because its mandate and expertise is in overall management of the executive branch, including the budget. By contrast, CEQ’s expertise and mandate is primarily devoted to the implementation of the National Environmental Policy Act (NEPA).  Expediting federal permitting is not simply a matter of speeding up the NEPA examination, but also often involves efficiently mediating interagency disputes about limited resources and overlapping statutory authorities, which is the purview of OMB.

Federal permitting of pipelines and energy infrastructure should be improved, and improving pipeline safety by replacement of aging pipelines should be encouraged.

For cross-border pipelines, the executive order governing the State Department’s process for moving forward with the Keystone XL pipeline could be amended:

However, for DAPL, the army should still be prepared to proceed with additional environmental review by developing a plan that can be immediately implemented if the court rules against it on the still-pending motion for partial summary judgment.

For Keystone XL, the State Department should do a rapid but thorough review of SEIS to consider and evaluate if changed circumstances impact the NEPA assessment.  The administration should consider changing the deadline for decision on the Presidential Permit to thirty or sixty days after Nebraska finishes its process.

On domestic content, the Commerce Department should evaluate alternatives to supporting US steel production other than implementing an explicit local content requirement that is inconsistent with WTO obligations.

Finally, on overall expediting of federal permitting, the administration should clarify that it is not creating a new, competing system for expediting infrastructure reviews and clarify how the recent order can be integrated with the existing FAST Act requirements.

The administration can best expedite approval of pipelines and other energy infrastructure without sacrificing environmental, safety, or economic concerns by ensuring that agencies have sufficient resources to meet expedited timelines while still complying with existing laws.
David L. Goldwyn is president of Goldwyn Global Strategies, LLC (GGS), an international energy advisory consultancy. He served as the US State Department’s special envoy and coordinator for international energy affairs from 2009 to 2011. He is chairman of the Atlantic Council Energy Advisory Board and the co-editor of Energy & Security: Strategies for a World in Transition (Wilson Center Press/Johns Hopkins University Press 2013).

Keith J. Benes is managing director of Euclid Strategies, a boutique energy and environmental consulting firm and an adjunct professor at American University where he teaches energy security and geopolitics.  He previously served as an attorney-adviser for the US State Department from 2004-2014 focused on energy, environment, and climate change matters.