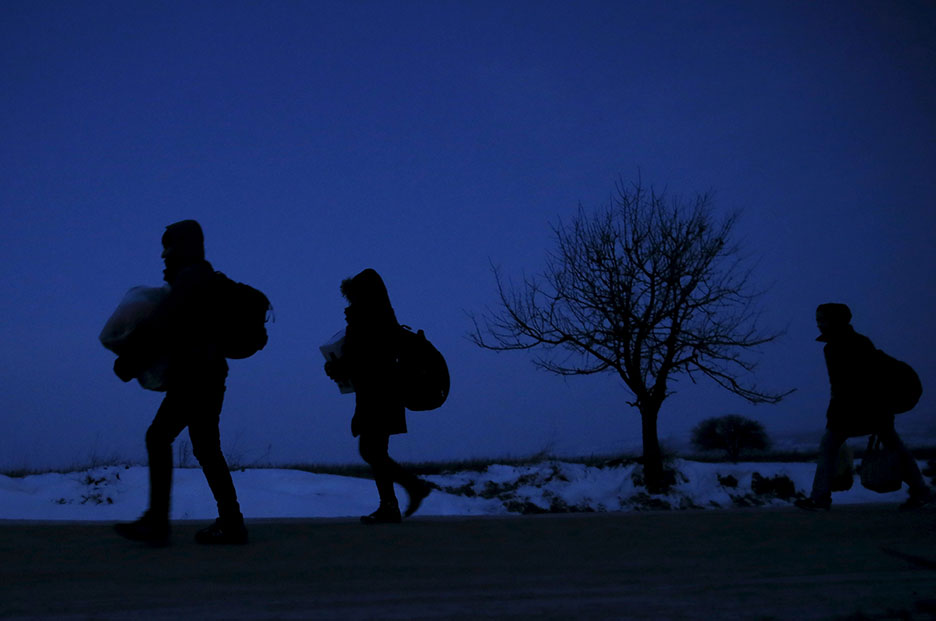 Migrants walk through a frozen field after crossing the border from Macedonia, near the village of Miratovac, Serbia, on January 18. (Reuters/Marko Djurica)

Greece’s failure to meet its obligations to secure the frontier of Europe’s passport-free Schengen zone stands in stark contrast with the role Macedonia is playing to deal with the influx of hundreds of thousands of migrants fleeing war zones.

More than 750,000 migrants moved through Macedonia last year. Macedonia, with some help from Albania, Slovenia, and other neighbors, has received, fed, provided medical assistance to, and processed these migrants. Brussels, Berlin, and Washington need to do all they can to help countries such as Macedonia cope with this challenge.

The European Commission unveiled a draft report on January 27 that was highly critical of Greece’s handling of the migrant crisis. European Commission Vice President Valdis Dombrovskis said the report found Greece has “seriously neglected” its obligations under the Schengen agreement. Athens has failed to register, fingerprint, and process the migrants, according to the report. The Commission has given Greece three months to rectify the problems. It is unlikely Greece will oblige.

The migrant crisis has jeopardized the future of the Schengen agreement as several EU states have introduced temporary border controls. Greece’s failure to live up to its obligations will only exacerbate the situation.

Securing the Greece-Macedonia border is key to managing the migrant crisis, according to American security experts who have recently visited the area. If this is not done, the Schengen regime, a great achievement of the EU, may be suspended. This would have serious repercussions for the EU’s future.

The Balkans are a unique area of Muslim-Christian co-existence. However, wars between Muslims and Orthodox Christians raged in Bosnia and Kosovo in the 1990s and the early 2000s. More recently, the Islamic State of Iraq and al-Sham (ISIS) and al Qaeda have recruited a few hundred fighters from the Balkans to fight in Syria and Iraq. Dozens of these fighters have trickled back, and small pockets of ISIS supporters and other extremists are springing up around the region, especially in the more remote mountainous areas. This is why a biometric screening process is necessary to weed out the terrorists and criminals who are trying to slip into the West with the migrants.

This is also why security cooperation between the Balkan countries, the United States, and the EU is so important. Brussels’ leadership in the war on terror, however, remains lacking.

“We need improved intelligence capacities and humanitarian assistance for Albania to ensure the wrong people do not enter Balkans and Europe, and those legitimately fleeing the conflict zones are vetted and assisted properly,” Ilir Meta, Speaker of the Albanian Parliament, told the New Atlanticist.

Ideally, all the migrants must be subjected to biometric screenings and checked against terror databases. Immigration authorities need to verify the names and stories of all asylum seekers, including analyzing their dialects and alleged towns and villages of origin. Anyone caught lying should be red flagged—or sent packing. With proper support, Macedonia, Albania, and other Balkan countries are capable of playing a key role in managing migration to the EU.

The migrant crisis is posing a challenge to all of Europe, but particularly to the continent’s smaller countries where economies are being strained and capacities overstretched.  There is a real danger that such pressure could lead to a violent backlash against the migrants and test ties between the indigenous Muslim and Christian populations of the region.

Meanwhile, the level of violence by the smuggler gangs—against local law enforcement officers, other smuggler organizations, villagers, and refugees—is escalating; and corruption among border patrol and immigration authorities is spreading. These developments need to be nipped in the bud.

For the past ten years, former Prime Minister Nikola Gruevski of Macedonia has presided over impressive economic and social progress. The World Bank’s Doing Business Index ranks Macedonia No. 6 in Europe and No. 12 in the world. Education and health care have made huge strides. However, the migration crisis now threatens to set back such progress and complicate Macedonia’s path to EU and NATO membership.

The Macedonian government feels that it has to fulfil Brussels’ policy prescriptions even as the EU refuses to provide the resources necessary to address the migrant crisis. If this continues, public opinion may swing away from European integration.

Macedonia is also grappling with political instability. The Gruevski administration  and opposition Social Democratic party leader, Zoran Zaev, have been blamed in a wiretapping scandal. Gruevski resigned earlier in January paving the way for early elections on April 24 under an agreement that was brokered by the EU in a bid to end the political gridlock. Zaev has threatened to boycott the elections, which the EU and the US support.

NATO and the EU neglect the Balkans at their own peril. Europe’s security requires working institutions, border monitoring and patrols, immigration services with biometric capabilities, and enhanced counterterrorism capabilities. The Balkan states don’t have the capacity or the necessary resources.

In the short term, the United States should work with the EU and the United Nations to provide technical assistance to the Balkans. In the longer term, Washington and Brussels should work to bring Macedonia and other aspirant nations into the EU and NATO as soon as possible.

Ariel Cohen is a Senior Fellow at the Atlantic Council’s Dinu Patriciu Eurasia Center and the Global Energy Center.