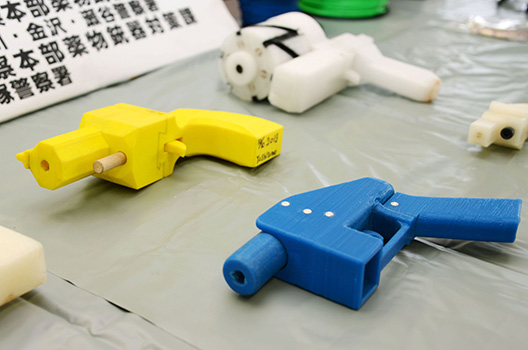 In August, the publication online of blueprints for 3D guns sparked fears of increased violence and unregulated ownership of weaponry. The 3D printing of weapons and weapon parts, however, poses not only a threat to domestic safety, but also to the international political landscape. Widespread 3D printing could enable nations that are the target of international sanctions to sidestep regulations and print restricted items. This would undermine the legitimacy and effectiveness of this vital foreign policy instrument.

First emerging in the 1980s, 3D printing—also known as additive manufacturing—is the process by which a digitally modeled object is created by a printer, which adds material in layers. 3D printing has been adopted in industrial and personal capacities and has been heralded for enabling complex objects—such as heart valves and houses—to be produced at a fraction of the cost and time. As new applications of this technology have emerged, the 3D printing industry has grown rapidly. According to a 2017 report published by Dutch Bank ING, the annual growth rate for investment in 3D printing over the past five years is 29 percent compared to 9.7 percent in traditional manufacturing machines.

Recently, 3D printing has been extensively tested in the military and defense sector. In 2017, the US Army’s Armament Research, Development, and Engineering Center (ARDEC) printed a grenade launcher named RAMBO (Rapid Additively Manufactured Ballistics Ordnance). The United States, having expressed interest and intent in expanding its 3D printing capabilities, has succeeded in printing ammunition and entire weapons systems. Additionally, the US Subcommittee on Emerging Threats and Capabilities set aside $13.2 billion for 3D printing—out of the overall $369.1 billion proposed defense budget—with the intention of increasing the printing and production of new and replacement parts and systems.

Although 3D printing has the potential to significantly reshape military and defense sectors by yielding cost-effective manufacturing solutions and easier-to-produce goods, this technology poses a number of risks to the current geopolitical and conflict landscapes. As outlined in a recent RAND Corporation report, and as reflected in ongoing domestic debates, widespread 3D printing could cause a spike in the proliferation of weapons, fundamentally increasing the acceleration and potential for global conflict, extremism, and crime. Additionally, as other nations develop enhanced 3D printing capabilities, they can deploy this expertise to locally produce scarce and costly military equipment, enabling them to sidestep sanctions on technology and weapon transfers.

There has already been some movement in this regard. At the 19th International Trade Fair in Pyongyang in 2016, the North Korean regime showcased an indigenously produced 3D printer, sparking concern that this could accelerate their weapons of mass destruction program. Currently, North Korea is subject to an expansive set of UN sanctions that among other things ban the trade of arms and military equipment, dual-use technology, transport vehicles and industrial machinery and metals, the export of goods such as electrical equipment, coal, and minerals, and the import of natural gas. The sanctions also cap oil and all refined petroleum products. Through the use of 3D printing, however, North Korea could print necessary military equipment, industrial machinery, and technology, therefore undermining the effect of the sanctions on its nuclear program.

Iran has also made significant advancements in 3D printing development and application. In 2016, for example, Iranian company Noura Imprinting Layers Industries (NILI) was celebrated for producing a metal 3D printer that has found research and industrial applications in the country’s aerospace and military sectors.

Sanctions that apply to a country’s technology and military sectors are usually particularly effective against countries with low supplies of core military equipment, as reverse engineering replacement parts is challenging and risky. However, as 3D printing is increasingly adopted within the global military industry, it can be used to undermine the value and effectiveness of these sanctions. As a result, nations such as North Korea, perceiving fewer consequences to shirking global pressures, could likely withdraw from international organizations and integral global dialogues, making it more difficult for the international community to curtail their behavior.

Rather than possible knee-jerk reactions—broad legislation which will curtail innovation—the international community should instead strive to collaboratively establish global norms and subsequent standards for this technology. These norms, which would likely take the form of a non-binding framework, can serve as the basis for implementing further, binding processes, including strengthening controls over exports and the flow of destructive raw materials, and requiring global 3D printing registration.

Many argue these conversations are premature, given that the global 3D printing industry is not yet highly developed and that nation states cannot yet produce flawless combat-ready systems. However, past global engagements around technological threats have demonstrated norms-building conversations are most effective if they occur before an unfavorable application of a technology is deployed. For example, since 2011, governments, civil society and the private sector have worked to establish norms for cyberspace through the Global Conference on Cyberspace (GCCS). By this time, however, the benefits to governments of exploiting cyber vulnerabilities had become apparent, thus decreasing incentives for norms building and cooperation.

The international community, under the leadership of a similar GCCS consortium, should, therefore, come together, sooner rather than later, to address the global security risks and threats 3D printing can pose to the international political system. This will ensure continued positive applications of 3D printing, while also mitigating threats to security and the global order.

Spandana Singh is the 2018 Cybersecurity and Technology Fellow for Young Professionals in Foreign Policy (YPFP). She is currently serving as a Program Policy Associate at New America’s Open Technology Institute where she works on issues of privacy, surveillance, cybersecurity and countering violent extremism.

Image: Seized plastic handguns which were created using 3D printing technology are displayed at Kanagawa police station in Yokohama, south of Tokyo, in this photo taken by Kyodo May 8, 2014. (REUTERS/Kyodo)