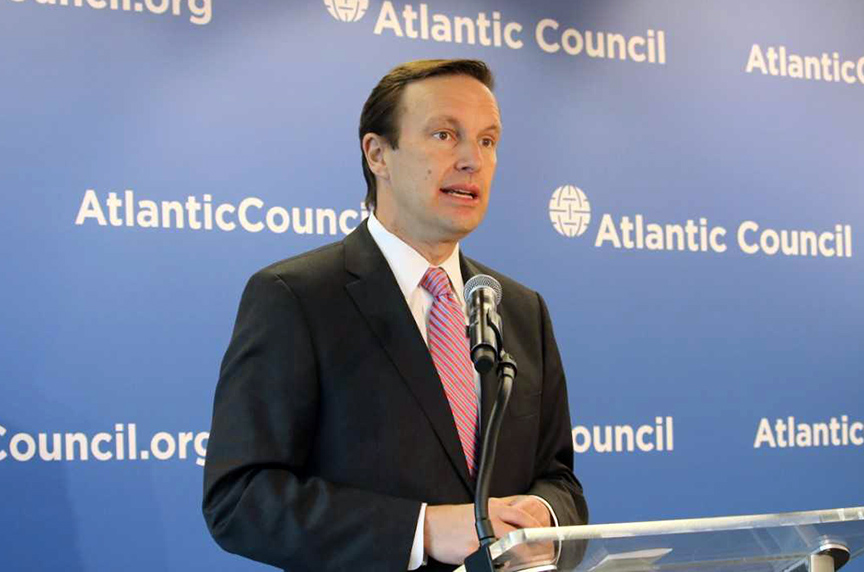 Fighting fake news—no, not the kind US President Donald J. Trump has made it a habit of railing against—has been the subject of a weeklong series of meetings and public events co-hosted by the Atlantic Council and Konrad-Adenauer-Stiftung from June 26-30.

The disinformation campaign being waged by various state and non-state actors seeks to “undermine the legitimacy of objective truth,” said Sen. Chris Murphy (D-CT). “It demands a response and whether we like it or not that response has to be led by the United States,” he added.

Murphy and Sen. Rob Portman (R-OH), both members of the Senate Foreign Relations Committee, have overcome the increasingly bipartisan nature of Washington to work together in the fight on disinformation. They co-authored the Countering Disinformation and Propaganda Act, signed by then US President Barack Obama in December of 2016. The act seeks to improve the United States’ ability to counter propaganda and disinformation from countries such as Russia and China, and help US allies do the same.

Murphy and Portman delivered keynote addresses at the DisinfoWeek conference at the Atlantic Council’s headquarters in Washington on June 29. Events were also held at Stanford University in Palo Alto, California. Stanford, along with the National Democratic Institute, FirstDraft, the McCain Institute for International Leadership, the University of Oxford, Jigsaw, and Demokratizatsiya, is a DisinfoWeek partner.

Western governments and intelligence agencies have accused Russia of meddling in elections in the United States and Europe. This interference has manifested itself in the form of cyberattacks and fake news stories disseminated by social media trolls.

Noting that many Republicans argue that Russia’s disinformation campaign only sought to undermine 2016 Democratic presidential nominee Hillary Clinton’s campaign, Murphy said: “Vladimir Putin and his disinformation network are not Republicans, they are opportunists. It is just a matter of time before they train their sights and their capabilities on the Republican Party… which makes this a bipartisan effort to try to make sure that we are standing up capabilities in the United States, but that we are also helping our allies across the world stand up similar capabilities in order to push back against disinformation.”

Contending that Americans have become obsessed with the day-to-day developments in the investigations into ties between the Trump administration and Russia, Murphy said: “What’s been lost is the story of what actually happened in 2016. A lot of folks say, it’s almost like the whole country is watching the third season of Homeland without ever having watched the first season.”

“In the first season of this story [there are] rooms filled with hundreds and hundreds of Russian-paid trolls, troll factories, people that were every single day in enormous numbers standing up fake news, fake accounts inside the United States to try to spread a series of lies to influence our election,” the Democratic senator said.

Russian meddling was reported during the French presidential elections in May—a disinformation campaign that Emmanuel Macron successfully outfoxed to win the election—and has been detected ahead of the German elections in September.

Russia is buying up media sources across Europe, especially in the Balkans where Moscow has stepped in as the United States has begun to withdraw, said Murphy, calling for a US response to the Kremlin’s disinformation campaign.

Portman said that for many Americans the “sudden spike in media and public attention” on Russian meddling since Trump’s election has “frankly, raised more questions than answers.” Trump has described the investigations by congressional committees and a special prosecutor into links between his administration and Russia as a “witch hunt.”

Portman said the public debate over Russia’s role in the 2016 presidential election has “too often devolved quickly into partisanship and sometimes even hysteria.” Saying he is supportive of the ongoing investigations into Russia’s involvement, he added: “We need to get to the bottom of it… And we need to do so because we want to uphold the integrity of our elections.”

However, the Republican senator said, “these investigations also illustrate a threat that is much broader than just one president or one state or one party. From Donetsk to Paris to Washington, this Russian influence operation has both fueled and been fueled by the discord, division, and disillusionment that is out there in our body politic today.”

US Sen. Rob Portman (R-OH) said that for many Americans the “sudden spike in media and public attention” on Russian meddling since Trump’s election has “frankly, raised more questions than answers.” (Atlantic Council/Whitney Milam)

Portman listed three key principles to addressing the challenge posed by propaganda wars. First, the challenge of Russian disinformation is not about Trump. “It is much broader than that. It was a serious problem before him and it is going to continue to be a problem long after his term in office,” he said. Second, greater awareness of the problem does not automatically translate into an effective policy response. Third, if the conversation on this topic becomes partisan it will not succeed. “This is about our democracy, it is about our shared values with democracies around the world, and it is about our values,” he added.

Concern about Russian disinformation campaigns comes at a time when Trump himself frequently criticizes legitimate US news outlets as “fake news.” An effort to counter foreign propaganda could also be complicated by Trump’s budget that would gut the US Department of State of vital resources.

Trump’s budget “totally misunderstands” the new set of asymmetric threats facing the United States, said Murphy. Instead, in order to adequately protect against these threats, the United States needs to consider a five-year doubling of budgets for these capabilities. “A twenty-to-one ratio in military spending versus democracy and development assistance probably doesn’t work today in a world where the threats posed to the United States increasingly don’t look like conventional military threats,” Murphy said.

In a discussion following remarks by Murphy and Portman, panelists took a closer look at how Russia is undermining democratic values in the West.

France’s recent experience in its presidential election stands out as a positive example of how the war against disinformation can be won.

Benjamin Haddad, a research fellow at the Hudson Institute, noted that Macron addressed fake news stories about his personal life very early on in his campaign. Macron’s campaign also planted fake documents on the website of his party, En Marche!, in an effort to trip up hackers. After his election, the French president directly raised this issue in his meeting with Putin. The White House on June 29 confirmed that Trump will meet Putin at the G20 summit in Germany next week.

“Beyond the technological dimension, it was really seen as a political challenge, as a state challenge that needed to be deterred by a strong public and private political message,” Haddad said of the French response.

Haddad contended that “Putinism,” marked by a fascination for strongmen and fueled by anti-Americanism and anti-globalization, has become part of a populist ideological package on the far right and the far left in France. Nevertheless, Macron “has done a really interesting job at shaping an ideological and political answer to this challenge,” he said, adding, “[Macron] managed to roll back Putinism by embracing the other side.”

Haddad was joined in a panel discussion by Boris Reitschuster, former head of the Moscow bureau at FOCUS Online; Kurt Volker, executive director of the McCain Institute for International Leadership; and Daniel Fried, a distinguished senior fellow with the Atlantic Council’s Future Europe Initiative and Dinu Patriciu Eurasia Center. Laura Jewett, regional director for Eurasia at the National Democratic Institute, moderated the discussion.

In Germany, Chancellor Angela Merkel is seeking re-election in September. Reitschuster said Germans are largely in denial about the disinformation threat posed by Russia. “The public discussion in Germany is not about Putin’s war… the main discussion is: ‘Why are we always blaming Putin?’” he said.

Putin, said Reitschuster, is bent on destroying Western values. “The main thing is that we go back to our values… and should understand that it is not Putin who is strong, but us who became so weak,” he said. “It is not so much about technology, it is much more about our values.”

In his opening remarks, Frederick Kempe, president and chief executive officer (CEO) of the Atlantic Council, said it is critically important to develop a US strategy to counter disinformation.

Fried, who served four decades in the US State Department before his retirement earlier this year, suggested exposing and revealing Russian disinformation using tools developed to deal with illicit, criminal, and terrorist financing. “If the Russians are using their cyber sector to undermine the West’s democracies, should we go after the cyber sector in general?” he asked. “Should we be going after the Russian cyber sector and the troll farms and the bot factories? How do you follow the money?”

Fried warned of the downside risks to a hasty approach. These include setting a bad precedent that would allow authoritarians to “do the same thing, throw it back at you, and claim that you have given them cover for going after genuinely independent media,” he said.

“Although the ultimate answer is to have faith in our values and hope for good candidates to come along… we also need to defend ourselves against the immediate threat,” said Fried.

Volker cautioned against overstating the impact of Russian meddling. Russia had actively sought to muddy the French elections, but it didn’t matter very much because “France had a better candidate who won the election… We were lacking such things here [in the United States],” he said.

“We’re not going to make fake information and disinformation and Russian efforts go away,” said Volker. “We’re probably not going to be able to compete byte for byte with what they’re doing.” However, he added, “we can expose and create transparency so that there is awareness of what is happening.”

Image: The disinformation campaign being waged by various state and non-state actors seeks to “undermine the legitimacy of objective truth,” said US Sen. Chris Murphy (D-CT). He spoke at the DisinfoWeek conference jointly hosted by the Atlantic Council and Konrad-Adenauer-Stiftung in Washington on June 29. (Atlantic Council/Whitney Milam)