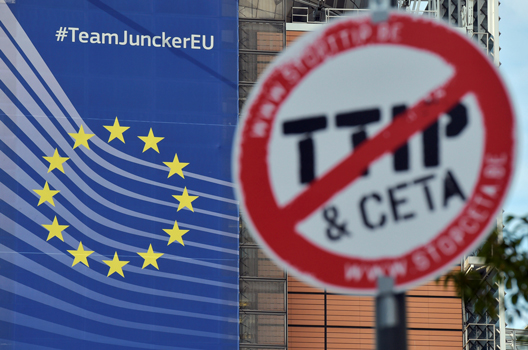 An anti-TTIP sign is displayed near the European Commission as thousands of people demonstrate against the Transatlantic Trade and Investment Partnership (TTIP) and the EU-Canada Comprehensive Economic and Trade Agreement (CETA) in the center of Brussels, Belgium September 20, 2016. (Reuters/Eric Vidal)

After fifteen rounds of negotiations with the United States on the Transatlantic Trade and Investment Partnership (TTIP) since 2013, European Union (EU) Trade Commissioner Cecilia Malmström said that the free-trade deal is likely to be “in the freezer” until the new US administration has figured out its position on transatlantic trade.

US President Donald Trump’s administration is not bound by any progress made in the TTIP negotiations by the previous Obama administration. TTIP was removed from the official White House website after Trump took office on January 20.

However, while he was quick to take the United States out of the Trans-Pacific Partnership (TPP), another free-trade agreement with Pacific Rim countries, Trump has been largely silent on TTIP. Renegotiating NAFTA has, instead, been his stated priority.

In its first weeks, the Trump administration has shifted away from multilateral negotiations in favor of bilateral ones, with protectionist tendencies. This position was underlined in Trump’s meeting with British Prime Minister Theresa May at the White House a week after his inauguration. The United Kingdom voted last year to leave the European Union—a so-called Brexit—and May is eager to forge a bilateral trade agreement with the United States.

While TTIP is not a priority for the Trump administration for now there is a lot that can be done to put this important issue back on its radar.

Options for the short to medium term

1) Focus on regulatory cooperation outside the TTIP framework

In 2013, at the start of TTIP negotiations, nine sectors were identified for possible closer regulatory cooperation: automobiles, pharmaceuticals, chemicals, cosmetics, information and communications technology, pesticides, engineering, medical devices, and textiles. Considerable progress was made in the fifteenth round of negotiations in late 2016 on the regulatory pillar, both in terms of horizontal disciplines – disciplines that apply to all service sectors – and within sectors. Progress was also made on regulatory cooperation; technical barriers to trade (TBT); and good regulatory practices with sectoral progress in regulatory compatibility for the pharmaceutical, auto, and medical devices sectors. Enhanced transatlantic regulatory cooperation, both in terms of horizontal disciplines as well as on specific sectors, even outside the TTIP framework, would be a viable short- to medium-term solution that would be beneficial for consumers, small and medium-sized enterprises (SME), research capabilities, and efficiency of regulations.  This is feasible especially in the case of pharmaceuticals because the existing Mutual Recognition Agreement constitutes an adequate legal basis for future updates outside of the TTIP framework.

One mechanism for achieving enhanced horizontal and sectoral regulatory cooperation would be a reinvigorated Transatlantic Economic Council (TEC). Founded after the US-EU Summit in Washington in 2007, the TEC had, until the start of TTIP negotiations in 2013, been the primary plenary forum for economic dialogue between the United States and the European Union to further economic partnership objectives and harmonize regulations. It has since continued working on a technical level, but ceded its status of primary forum to TTIP negotiating parties. Reinvigorating the TEC would allow progress to be made on several key issues until TTIP negotiations are officially relaunched.

For this to be a viable solution, the TEC would need to be revised to include closer agency involvement, as has been the case with TTIP, to be able to move from being a primarily technical forum to one which can implement changes.

While the Trump administration is reassessing its trade priorities, the EU could reassert its leadership position in the international trade arena: ratifying trade agreements with Canada (CETA) and Vietnam, as well as pursuing bilateral trade deals with Japan and Mexico will allow the EU to remain at the forefront of international trade. In addition, the EU should take the innovative suggestions that it put forward in TTIP negotiations, i.e. an SME chapter or a reconfigured model of Investor State Dispute Settlement (ISDS), (a neutral, international arbitration procedure)and include them in all its future trade negotiations. This proactive strategy would allow the EU to continue to be an agenda and standard-setter in international trade.

Options for the long term

Despite the Trump administration’s preference for bilateral deals, this is not an option for the future of US-EU relations. Since trade policy is an exclusive power of the EU, the institution, not individual member states, negotiate trade agreements.

TTIP negotiations could be relaunched under a different name and possibly new structure in the future. This would allow the Trump administration to present the deal as a “new and improved” version, distancing itself from the impression that it is merely putting the finishing touches on a deal negotiated by the Obama administration.

Such an approach could mean an initial setback for negotiations, but it could also be advantageous for European partners as it would give them the chance to improve communication with their publics at home. One way to rebrand and restructure TTIP would be to shift away from an emphasis on tariffs and regulatory convergence and toward a rhetoric and strategy focused on jobs and growth. This would be in line with the Trump administration’s priorities and make the benefits of transatlantic cooperation more apparent to the average consumer on both sides of the Atlantic.

Given the progress made in some areas and the difficulties in coming to an agreement in other sectors, one could envision a “living” agreement with multiple phases. However, if negotiators only focus on the areas where there has already been significant progress, and set aside contentious issues such as ISDS and Geographical Indications (products that have a specific geographical origin and have qualities inherent to this specific origin), it will likely result in diminished political will for a “phase 2” – tackling the more contentious subjects of the negotiations in the years to come. In addition, it would take away bargaining chips for both sides as some issues that would be part of “phase 1” would initially be linked to concessions elsewhere in the agreement

This option would leave out all regulatory convergence efforts and simply focus on cutting remaining tariffs between the United States and the EU. However, tariffs between the two blocs are already low and the main innovation of TTIP was cutting regulatory barriers. Given the Trump administration’s priorities of cutting down tariffs for the United States, this option seems feasible from a US standpoint.

However, several European leaders have repeatedly said that they would not agree to a “TTIP light.” Ultimately, all twenty-eight EU member states would have to agree to any form of TTIP. For that to happen, a final agreement would have to benefit all of the member states. A TTIP that focuses only on removing tariff barriers would not deliver the benefits all member states had initially envisioned and would not be politically viable.

Marie Kasperek is an associate director in the Atlantic Council’s Global Business and Economics program. You can follow her on Twitter @TTIPACTION