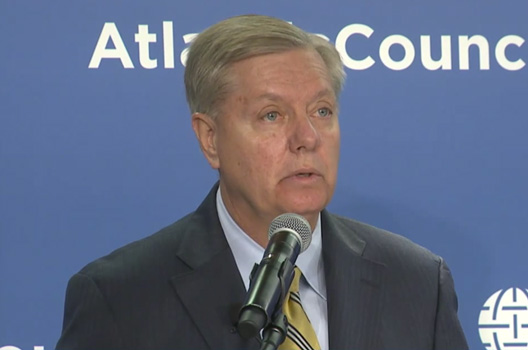 Republican presidential hopeful wants more US troops in Iraq and Afghanistan, would reject a ‘bad’ nuclear deal with Iran

Republican presidential candidate Sen. Lindsey Graham laid out an interventionist foreign policy in a July 8 address that was peppered with blistering critiques of President Barack Obama as well as some fellow Republicans and tough talk on radical Islam.

“To those on the Republican side who want us to become fortress America, I am your worst choice,” Graham said in the inaugural address of the Atlantic Council’s “America’s Role in the World” presidential candidate speaker series.

Graham, who represents South Carolina in the US Senate, described fellow Republican presidential candidate Sen. Rand Paul as “the one voice in the Republican Party that I think has been weaker on national security than President Obama.”

He added that the United States, which along with other major world powers is negotiating an agreement that would curb Iran’s nuclear ambitions in exchange for sanctions relief, would never be able to get a good deal with the Iranians because Obama is “viewed as weak in the eyes of the Iranians, and uncertain in the eyes of our friends.”

“Everybody running, except Rand Paul, could get a better deal with the Iranians,” he added.

Graham said he would reject a “bad deal” with Iran, which he described as one that would trigger a nuclear arms race in the Middle East.

“If you infuse [the Iranian] regime with more money you are going to see a tremendous backlash from Sunni Arabs,” he said.

Describing Iran as “North Korea in the making,” the Senator said he believes Iran wants a nuclear weapon to ensure the regime’s survivability.

As President, Graham said, he would only agree to an enrichment program that can supply the needs of a single reactor, ensure an intrusive international inspections regime, and not give the Iranians a single dollar until they change their behavior.

Graham is competing in a crowded field of Republican presidential hopefuls. Seeking to distinguish himself from the current cast of sixteen, he said that when it comes to foreign policy he is offering a “very clear and different path.”

He delivered warnings to China (“if you want to cheat, hack into our systems, cyber attack this nation, steal property not yours you are going to have a contest”) and Russian President Vladimir Putin (“if you think you’re going to be able to muscle your way around Europe, forget it”), and advocated providing defensive weapons to Ukraine.

Graham’s remarks were followed by a discussion moderated by CNN’s Jake Tapper.

The Senator devoted part of his remarks to spelling out his plans to deploy more US troops in the fight against radical Islam.

The 3,500 US troops currently in Iraq are “too few to do what we need to do” and that as President he would increase ground forces to around 10,000, which would include a Special Forces component that would be focused on decapitating the leadership of the Islamic State of Iraq and al-Sham (ISIS), he said.

He also favors sending US troops into Syria.

And in Afghanistan, he would leave at least 9,800 US troops and keep on the table the option of actually ramping up that number.

Obama agreed in March to leave 9,800 US troops in Afghanistan until the end of 2015. He intends to shrink the US military presence in Afghanistan, but the pace of that withdrawal has yet to be determined.

“If we go down to 1,000 US combat forces, Kabul-centric, training the Afghan military, that is a mistake for the ages,” said Graham. “We will have the same outcome we did in Iraq.”

Describing terrorist groups based along the border with Afghanistan and Pakistan as “growing in influence” he said it is “in America’s national security interests to keep its counterterrorism force in Afghanistan as long as it takes to eradicate the threats along the border.”

“At the end of the day, the decision President Obama is about to make about Afghanistan will be one of the most consequential decisions he makes as President,” Graham said.

Obama acknowledged July 6 that the military effort to degrade ISIS would not be quick.

“As with any military effort, there will be periods of progress, but there are also going to be some setbacks,” the President said. He went on to list the successes against ISIS, including eliminating terrorist commanders, and destroying weapons and training camps.

Graham, who is Chairman of the Senate Armed Services Committee, said the President “consistently oversells our successes and minimizes the threats to our nation.”

He complained that there is no coherent strategy to degrade and destroy ISIS and that there are now more radical Islamist groups that have the capacity and desire to strike the United States.

“Simply put, President Obama’s foreign policy has been a disaster, and former Secretary of State Hillary Clinton was one of his chief architects,” he added.

Like Graham, Clinton, too, is a White House hopeful.

Across the Middle East and North Africa, in countries that were buffeted by the Arab Spring pro-democracy uprisings—Egypt, Libya, and Yemen in particular—entrenched rulers were ousted only to be replaced by chaos or repressive regimes.

ISIS has thrived in this fluid environment expanding its reach beyond Syria and Iraq and into other parts of the region in its quest to establish a caliphate.

But, he added, the developments in the Middle East don’t represent an end of the people’s desire to have a say.

The Arab Spring is “alive and well,” said Graham.

“They did not take Mubarak down, Gadhafi down, Saddam down; they don’t want Assad to go to be replaced by al Qaeda or [ISIS],” he said, adding that he hoped that the next US President would reconstruct the Arab Spring.

In Syria, a civil war has dragged on for over four years and claimed the lives of more than 200,000 people.

Graham said it is an “absolute must” that Syrian President Bashar Assad, whom he described as a magnet for Sunni extremists and a puppet of Iran, must go but “we have no strategy that would lead to him leaving.”

The war in Syria, which has pushed millions of refugees out across the region, risks the stability of Lebanon and Jordan, Graham warned.

“The strategy articulated by President Obama to degrade and destroy [ISIS] doesn’t have a snowball’s chance in hell of working,” said Graham.

“The idea that the Kurds could be the liberating force inside of Syria is a fantasy,” he said.

Taking on Clinton and Trump

In a CNN interview this week, Clinton accused Republican presidential candidates of being “on a spectrum of hostility” towards immigrants.

Graham lashed out at Clinton saying she was “completely AWOL” when she had the opportunity as Secretary of State to push Obama to take up immigration reform early in his presidency.

He also criticized fellow Republican presidential candidate Donald Trump for describing most Mexican immigrants in the United States as drug dealers and rapists.

“My party is in a hole with Hispanics. The first rule of politics when you are in a hole is to stop digging,” said Graham. “Somebody needs to take the shovel out of Donald Trump’s hands.”