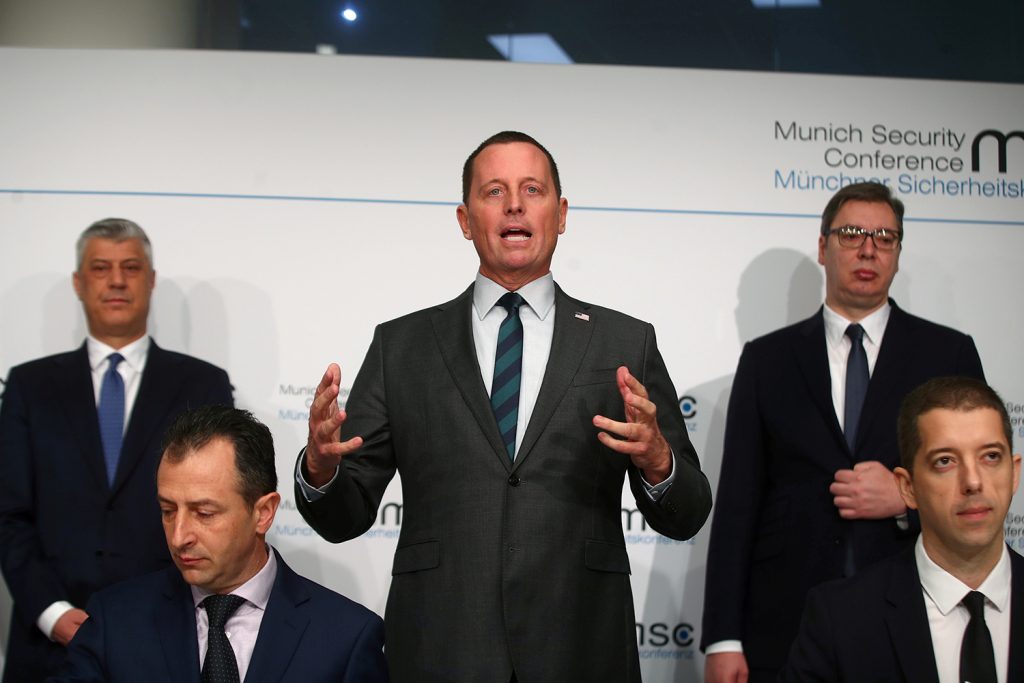 Officials from Kosovo and Serbia are set to meet at the White House on June 27 to discuss their relationship. Dimitar Bechev and Molly Montgomery provide their own takes on the upcoming summit here and here.

When Ambassador Richard Grenell, US President Donald J. Trump’s special envoy for peace negotiations between Serbia and Kosovo, initially tweeted that delegations from the two countries, led by their respective presidents, would be coming to the White House in late June for “discussions,” I assumed that a long-elusive deal was in the offing. After all, one usually only calls principals together to such a high profile location if a signing ceremony is within reach, with only the last few elements needing to be hammered out by the only people capable of credibly guaranteeing a final deal’s legitimacy. Could it be that the much-maligned Grenell had pulled off a diplomatic feat that had eluded legions of diplomats for decades?

Minutes later, however, Grenell followed up his initial tweet with a warning that tempered enthusiasm: if the meeting comes up empty, he said, it’s back to the unhappy status quo ante, with the United States washing its hands. Maybe this is just the shape of diplomacy done by tweet, but to me it betrayed the possibility of this being more of a Hail Mary pass than a breakthrough. And indeed, sources on the ground soon confirmed to me that serious work remained to be done before any kind of deal could be signed.

Grenell and former US ambassador to the EU Gordon Sondland are said to have bonded over a shared contempt for process-laden traditional diplomacy—and diplomats. As private sector entrepreneurs serving a self-styled CEO-in-Chief in Washington, they felt their remit was to get stuff done by cutting through what they saw as useless pomp and preening by experts and civil servants alike. Some of that contempt shone through as Grenell sniped back at Ambassador Nick Burns’ criticism about the Trump administration going into the negotiations without the Europeans on board: “You don’t know what you are talking about,” Grenell wrote (on Twitter, naturally). “But you are so sure you do. Typical.”

I share many of the reservations of the so-called “expert class.” A vast gulf has opened between Germany and the United States over the sidelining of Kosovo’s former Prime Minister Albin Kurti; the Trump administration seemed all too happy to have seen his back after the country’s Constitutional Court denied him new elections, while Berlin felt like Washington was meddling behind the scenes to remove a politician hostile to negotiating a quick deal with Serbia. For his part, French President Emmanuel Macron is smarting as well, as he was planning to host the exact kind of summit that Trump has now taken away from him. While the big European players are probably helpless to prevent success, they would surely welcome failure as a deserved comeuppance to a haughty and rude Trump administration.

Still, to dismiss Grenell’s efforts as somehow inevitably doomed would be churlish. For one thing, the stakes are dizzyingly high and both sides know it. Kosovo’s President Hashim Thaçi has announced he will not be seeking another term. He also knows that should he fail, his increasingly popular nemesis Kurti could sail into power with solid majorities—and be looking to settle scores. Serbia’s President Aleksandar Vučić faces no domestic political threats to his rule, but he knows he will soon have harsher critics in Washington should former US Vice President Joe Biden win in November, a hostile adversary in Prishtina should Thaçi fall after talks, and vanishingly few boosters in major European capitals. It’s now or never.

And moreover, we don’t really know what the goal of the talks is. Most assume that anything short of a final status deal would be a failure, but that could be shortsighted: a smaller win may be possible, and could be significant. Indeed, Grenell himself has averred that “we must first make progress on growing the economies.” Some kind of win-win agreement locking in free movement of goods and people could see Kosovo warming an ongoing initiative to create a cohesive economic zone in the Western Balkans.

Europeans should try hard to look beyond their grievances with the Trump administration and look to build on whatever positive comes of these negotiations. Even if a genuine breakthrough is achieved, it could well be fragile and will need support from all sides. It would be a shame let opportunities pass due to fits of pique, however rightfully earned they may happen to be.

Setting expectations high would be ill-advised. For one, Vučić has no incentive to rush with recognizing Kosovo. Prishtina, meanwhile, will view the removal of tariffs on Serbia as having done its share, and will seek concessions. Europeans and Americans should be working side by side, pooling their leverage to move forward normalization. But sadly, this is less and less the case recently.

Why a Kosovo-Serbia White House deal could be dangerous

While the Trump administration and the EU have both flirted with the idea of territorial exchanges at times over the past three years, experts on both sides of the Atlantic fear the precedent such an agreement would set in a region where nationalists regularly demand secession or union with ethnic brethren. Even if Pandora’s box could be closed, the implementation of such an agreement would almost certainly result in de facto ethnic cleansing, heightened tensions, and the potential for renewed violence.