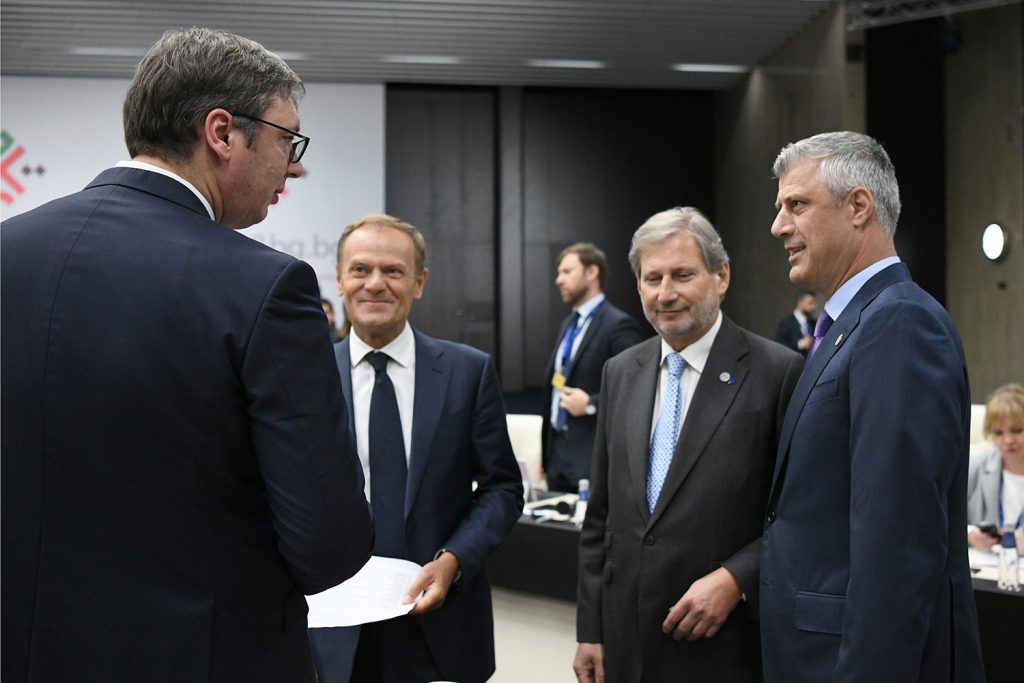 Officials from Kosovo and Serbia are set to meet at the White House on June 27 to discuss normalizing their relationship. Molly Montgomery and Damir Marusic provide their own takes on the upcoming summit here and here.

The surprise announcement of Serbia-Kosovo talks hosted by the White House on June 27 caught many off-guard,  with some even quipping that the high-profile meeting should have been scheduled for the following day, June 28. St. Vitus Day (Vidovdan) is remembered in Southeast Europe for the 1389 battle of Kosovo, the assassination of Archduke Franz Ferdinand, the passage of Yugoslavia’s first constitution in 1921, and, more recently, with the extradition of one Slobodan Milošević to The Hague. The Trump administration would, no doubt, be pleased to see itself similarly entering the region’s annals of history. They may have a shot at it, but there are good grounds for skepticism too.

The White House wants to see a deal that includes a recognition of Kosovo by Serbia. Washington doesn’t mind if Belgrade’s price is retaining a piece of the disputed land. A breakthrough in the Balkans would be a rare diplomatic achievement for an administration whose international record is less than stellar. Serbian President Aleksandar Vučić is looking for a deal too—though he would rather not talk about the recognition part. Same for President Hashim Thaçi who appears willing to trade the Serb-majority lands north of the Ibar River for Belgrade’s acceptance of Kosovo as a sovereign state. In addition, both leaders would be in position to claim a strong mandate by their constituents. Vučić’s Serbian Progressive Party (SNS) and its allies are certain to emerge victorious in the general elections on June 21, which the main opposition groups will boycott. Thaçi, not without US support, prevailed over the former Prime Minister Albin Kurti, his rival and leader of the Vetënvendosje (Self-Reliance) movement opposed to surrendering territory to Serbia. As of June 3, a new coalition cabinet aligned with Thaçi has been confirmed with Abdullah Hoti at its head.  With both Belgrade and Prishtina falling in line, it was Special Envoy Richard Grenell’s turn to make the surprise White House invitation.

Yet setting expectations high would be ill-advised. For one, Vučić has no incentive to rush with recognizing Kosovo. The main benefit for Serbia to settle the dispute once and for all has to do with the EU, rather than currying favor with the United States or even cleaving away northern Kosovo, an enclave Belgrade controls informally anyhow. Membership in the EU is, at the end of the day, what could motivate Serbia to give up its sovereignty claim. Since accession is not an immediate prospect, it is unreasonable to expect more than the odd goodwill gesture. Like, for instance, putting on hold the campaign to convince various countries in Africa or Asia-Pacific to withdraw their recognition of Kosovo. But even that is not 100 percent certain. Vučić is expected in Moscow on June 24 where he is attending the Victory Parade. Russian President Vladimir Putin, Vučić’s main ally in the quest to deny Kosovo statehood, will probably tell him not to fold. The EU is weighing in too, with its Balkan Special Envoy Miroslav Lajčák already in the Balkans. Brussels opposes territorial swaps and will probably warn Vučić not to fall for the US initiative, which—in its view—undermines Europe’s long-standing effort at normalizing ties between Kosovo and Serbia.

This brings the discussion back to Prishtina. On June 6, the new government removed all tariffs slapped on Serbian goods, a move that paved the way to the Washington meeting. Having done its share, Kosovo will expect concessions from Serbia. If Thaçi’s people return empty handed, they are bound to face heat domestically. Kurti is calling for fresh elections which are likely to see Vetëvendosje triumphant once more, as in October 2019. Accommodating Vučić would only fan Albanian nationalism. The only external power who can make a positive difference at this point is the EU rather than the United States. Europe has been denying Kosovo visa-free travel despite the fact that it has met the technical criteria. Short of recognition, lifting the Schengen barrier to Kosovo citizens should be a substantial enough reward for Prishtina to keep all parties there committed to normalization. In an ideal world, Europeans and Americans should be working side by side, pooling their leverage to move forward normalization. But sadly, this is less and less the case recently.

Read more on the June 27 summit:

Why a Kosovo-Serbia White House deal could be dangerous

While the Trump administration and the EU have both flirted with the idea of territorial exchanges at times over the past three years, experts on both sides of the Atlantic fear the precedent such an agreement would set in a region where nationalists regularly demand secession or union with ethnic brethren. Even if Pandora’s box could be closed, the implementation of such an agreement would almost certainly result in de facto ethnic cleansing, heightened tensions, and the potential for renewed violence.