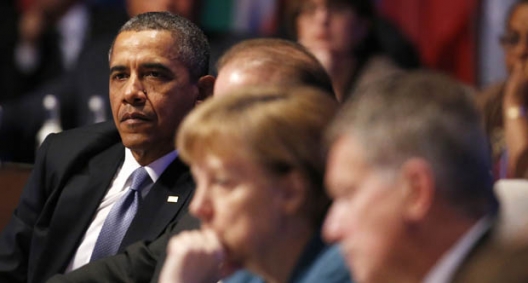 President Obama and his European Union colleagues will gather Wednesday in the most important meeting so far for Western governments as they decide how to respond to Russia’s egregious, illegal seizure of Crimea from Ukraine. US and European sanctions so far have targeted individuals among Moscow’s elite, rather than the broader Russian economy. At the US-EU summit, leaders should realize that, tragically, even such measures are unlikely to undo Russia’s annexation of Crimea. New steps must be aimed at deterring further Russian aggression — notably in eastern Ukraine, Moldova and Georgia – and, in the long haul, at changing Russian behavior.

At the summit, the transatlantic partners should take the following steps:

A key part of the summit must be to provide reassurance to the new Ukrainian government. Both the US and EU have done so individually, but the most powerful statement would be for them to stand together and make clear their commitment to Ukraine’s future. At the summit, they should:


Steps such as these are essential follow-through to the steps that the United States and the European Union already have taken, including the US asset freezes and visa restrictions on 31 individuals and Bank Rossiya, and its pledge of $1 billion in loan guarantees for Ukraine. The EU has imposed sanctions on 33 individuals, both Ukrainians and Russians. While the EU has been criticized for not targeting individuals close to Putin, even the prospect of EU visa restrictions and asset freezes would alarm many in the Russian elite with property in London or children at European schools or universities. The EU has also halted negotiations with Russia on a trade agreement and on visa facilitation that would have allowed Russians greater access to Europe.

For Ukraine, the EU has announced €11 billion in assistance over the next years and pledged to lift a number of barriers that keep Ukrainian goods out of European markets. The latter move is estimated to be worth €500 million in reduced tariffs annually. It also reaffirmed its intention to allow visa-free travel to the EU for Ukrainians once certain technical conditions are met. The EU and Ukraine last week signed the political chapters of the Association Agreement — the accord that former Ukrainian President Viktor Yanukovych refused to sign in November, sparking the demonstrations in Kyiv that would push him from power. Although the full agreement, including its extensive trade and investment provisions, is likely to be signed only after Ukraine’s presidential elections in May, the completion of the political chapter is an important symbol of the EU’s commitment to partnership with Ukraine.

Moving from the sanctions on individuals to broader measures has proven very difficult – especially for Europe, which has the real linkages that bring both leverage over Russia and pain in exercising it. Europe’s trade with Russia totaled €267 billion in 2012, while the US total was only €18.9 billion. Yet, even if it were not still struggling with serious unemployment, Europe would find it difficult to implement broad sanctions without offering extensive government support to affected firms and workers. And recent proposals in the Russian Duma that firms from sanctioning countries may face expropriation of their assets in Russia is probably sending shudders through the boardrooms of many large western companies, whether engaged in energy joint ventures or manufacture of consumer goods.

Under normal circumstances, the US-EU summit should have focused on the Transatlantic Trade and Investment Partnership currently under negotiation. But this week, even TTIP must be considered in this new strategic landscape. The US-EU summit offers a key opportunity to deepen transatlantic cooperation in building a strong Ukraine for the future.

Fran Burwell is a vice president of the Atlantic Council and director of its Program on Transatlantic Relations.

Image: US President Barack Obama attends the opening session of the Nuclear Security Summit in The Hague on March 24, 2014. REUTERS/Yves Herman