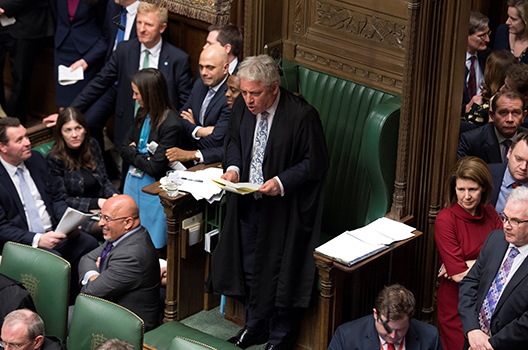 The British government’s hopes that it might somehow be able to navigate a way through the Brexit maze were dashed on March 18 when the speaker of the House of Commons ruled that British Prime Minister Theresa May could not put her Withdrawal Agreement to a third vote unless there were substantial changes.

And, quite astonishingly in a country that prides itself on keeping the monarchy out of politics, one of the few ways in which the government could overcome this block to its plans would involve a highly symbolic presentation by Queen Elizabeth II.

The ruling by Speaker John Bercow came as May was actively considering whether to ask for a third vote in the next day or two, with the prime consideration being whether she had secured sufficient additional support to have a chance of winning.

Bercow’s bombshell came when he declared: “If the government wishes to bring forward a new proposition that is neither the same nor substantially the same as that disposed of by the House on March 12, this would be entirely in order.”

Before Bercow’s ruling, the government had been hoping that this week it might just be able both to hold a vote and to secure a majority for the Withdrawal Agreement concluded with the European Commission last November. That would have meant that when May headed for Brussels for the European summit on March 21, she would need to request only a short extension of a few weeks to Britain’s scheduled departure on March 29 in order for Parliament to pass the necessary enabling legislation.

But now she may have to ask for a much longer extension—and that would raise all sorts of complications for the other twenty-seven European Union (EU) member states which have to approve such a request since so many EU leaders have stressed that they only want to approve an extension if it is intended to secure approval for the Withdrawal Agreement.

But even before May heads to Brussels, she must work out what to do next at home. One of her most senior law officials, Solicitor-General Robert Buckland, said that Bercow’s statement had prompted “a major constitutional crisis.”

The government appears to have three major options. The least likely is that it will somehow manage to secure the kind of changes to the Withdrawal Agreement that would enable it to say it was bringing back a substantially changed proposition. The European Commission has simply said the negotiations are at an end.

The next potential solution is to end this session of Parliament, or in constitutional terms, to prorogue Parliament. This has been dubbed the nuclear option since it would mean abandoning all legislation currently working its way through Parliament, including a major trade bill, and then starting up with a whole new session so that the original motion could be reintroduced. This would require a formal opening to a new session of Parliament, a duty traditionally carried out by the queen who then delivers her government’s new program in a statement from the throne. This is technically doable, but there would be real concern that it would somehow be involving the monarch in active politics, a development which the queen herself has always sought to avoid.

The third, and most likely option, is that May delivers a direct challenge to the speaker, calling for a vote in the House of Commons to set aside the rules of Parliament—known as Erskine May—in order to allow her deal to be put to the House for a third time. This would require a simple majority, but she might just get it, not least because it would give both the Conservative Party and its allies from Northern Ireland’s Democratic Unionist Party a clear enemy to target: John Bercow.

That’s because Bercow has long been a highly controversial figure. Originally elected as a Conservative MP, he is now loathed by many of his former colleagues. Indeed in 2015, when then Prime Minister David Cameron described him as a “little sh*t” he had to survive a Tory attempt to remove him from office.

While it is touch and go whether such a move would succeed, if it were to pass the House of Commons then, almost certainly, May’s deal would be passed soon afterwards.

As for what the people think, a YouGov poll issued March 18 included the question: “If a Brexit deal cannot be agreed by the deadline, for the UK to leave the EU on the 29th March, 2019, what would be your preferred option?

So Britain remains split. And no one knows just what the next few days will hold, let alone what the final outcome will be.