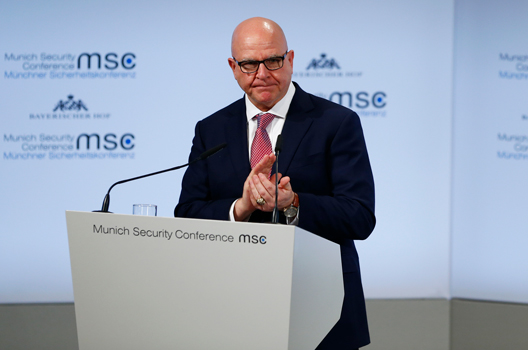 State and non-state actors are increasingly engaging in cyber conflict through a range of disruptive and destructive influence and interference operations. Among their targets? Elections.

While election interference does not equal the existential threat of disintegration of nuclear nonproliferation regimes or the perils of climate change, together these challenges all contribute to what was the key theme of the 2018 Munich Security Conference (MSC)—the crisis of the liberal international order.

MSC Chairman Wolfgang Ischinger noted that “in the last year, the world has gotten closer—much too close—to the brink of a significant conflict.”

For the past six years, the Atlantic Council’s Cyber Statecraft Initiative has been among the organizations privileged to organize an event on the sidelines of the MSC, which this year ran from February 16 to 18. This year in particular, the Council’s event, Democracy, Hacked: Electoral Cybersecurity in an Age of Interference, complimented and elaborated on the main focus of the conference and the risks posed by cyber interference in elections to the existing liberal rules-based order.

Election interference introduces instability to the international order by posing a threat to the set of norms and rules underpinning it, namely rule of law. Further, it breaks set rules stipulating non-interference into a state’s domestic affairs and respect for state sovereignty.

Cyber operations targeting elections also show the extent and dexterity of capabilities state actors can use to further their foreign policy goals and objectives.

Influence and interference operations are not a new phenomenon. Technology merely makes them faster and more efficient. While neither the motivations nor underlying logic of actors such as Russia have changed over the course of their documented instances of cyber interference, decision and policy makers struggle to grasp the complex repercussions of these operations and find effective solutions to this problem.

To counter and deter interference and influence operations, policymakers in democratic nations around the world will have to become geopolitical psychologists. They will have to better understand the motivations of malicious states, have foresight into how technology enables them, and the appreciate the vulnerabilities of leaders and regimes in these countries. Examples include the state of the economy, ego, public image, or the ability to travel internationally and send their children to schools abroad.

While this thought process is applied when responding to conventional conflicts and threats, once technology is part of the equation, the issue at hand is often treated as a new one. It shouldn’t be.

There is also a need to rethink how principles of non-intervention and other norms of acceptable state behavior and norm-making processes should evolve with changing geopolitical context, technology, and stakeholders.

Above all, nation states responsible for identified malicious behavior must be held accountable for their actions using all levers of national power. States have become more forward leaning in this area. This is proven by the US intelligence community publicly concluding that Russia meddled in the 2016 US presidential elections, economic sanctions imposed by the United States on Russia, and the indictment by a federal grand jury on February 16 of thirteen Russian nationals and three entities in connection with the meddling. Measures should, however, be timely and consider all the equities that are important to the adversarial regime.

Clarity of the problem at hand would facilitate dealing with the issue at a tactical level. Law clerk and Yale academic Jacqueline Van De Velde argues that states would have an easier time determining how to respond if they broke down election interference into critical parts; each part can merit a different response. However, the necessary first step is to find the resolve to hold the perpetrators accountable in a way that will truly hit their vulnerabilities.

It is widely understood how and why election interference is a threat to democracy, but the implications of such attacks on established principles underpinning the international order prove even more dangerous. Inaction will only embolden aggressor states, especially those that do not hesitate to challenge the rules in other important areas of international security, to continue their assaults.

Klara Jordan is director of the Atlantic Council’s Cyber Statecraft Initiative in the Scowcroft Center on Strategy and Security. You can follow her on Twitter @JordanKlara