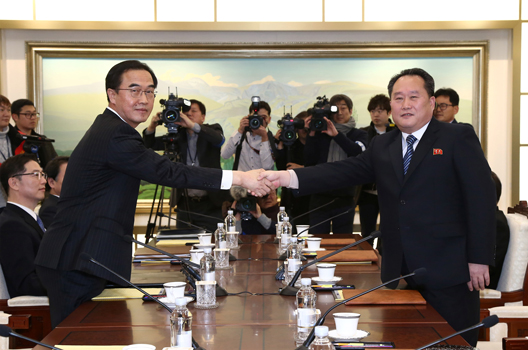 Head of the North Korean delegation, Ri Son Gwon shakes hands with his South Korean counterpart Cho Myoung-gyon during their meeting at the truce village of Panmunjom in the demilitarised zone separating the two Koreas, South Korea, January 9, 2018. (REUTERS/Korea Pool)

The most recent example of sports diplomacy between North and South Korea will not solve all problems between neighbors on the divided peninsula, but it certainly marks a step in the right direction.

During a meeting between negotiators from Pyongyang and Seoul in the demilitarized zone (DMZ) along the border between North and South Korea on January 9, it was agreed that North Korea would send a delegation to the Winter Olympics hosted by South Korea in February, military talks to decrease tension between the two neighboring nations would begin, and a military hotline would be reopened.

Against the backdrop of a succession of missile and nuclear tests by Pyongyang, these talks—the first meeting between the two nations since 2015—indicate a potential improvement in relations. The focus on the relationship between Korean citizens, centered on the Olympics, has changed the tone of past discussions concerned only with political and military crises. It has not been decided whether there will be another round of talks.

While the impact of sports on nuclear policy remains to be seen, the focus on the Olympics has given North and South Korea a platform on which to build a future relationship, defined by—if not camaraderie—an understanding.

How did this happen and why is it important? Here’s a timeline of how events unfolded:

January 1, 2018: North Korean leader Kim Jong-un delivers a New Year’s Day speech in which he outlines the potential for improved relations with South Korea. He also expresses his desire to see North Korea represented in the Winter Olympics. Overtures of cooperation from North to South Korea have been seen as an attempt to drive a wedge between Washington and Seoul. Kim continues his nuclear threats against the United States in his speech, describing a nuclear button on his desk and missiles able to reach the US mainland.

January 2: South Korean President Moon Jae-in takes up Kim’s proposal of renewed relations and proposed peace talks to be held the following week. The talks, he said, would be held between high-level negotiators to discuss North Korean participation in the Olympics. Moon has described his desire to improve relations with North Korea since assuming office in 2017.

January 2: In a controversial tweet, US President Donald J. Trump escalates the rhetorical tension with North Korea saying he too has a nuclear button that is “much bigger and more powerful.”

January 3: North and South Korea reopen a military hotline based in Panmunjom, a village in the DMZ. This marks the first reopening of communications across the border in two years.

January 4: North Korea accepts South Korea’s offer to hold peace talks at the Peace House in Panmunjom. These talks symbolize a significant thawing in the frozen relationship between the neighboring countries.

January 9: Negotiators from North and South Korea convene in the DMZ for peace talks and a discussion around North Korea’s proposed delegation to Pyeongchang, the site of the Winter Olympics. South Korean Unification Minister Cho Myoung-gyon, and his North Korean counterpart, Ri Son Gwon, lead the discussions. Kim and Moon are not present, but both are able to monitor the discussions in real time and interject if necessary by way of a direct phone line to the Peace House. Neither chose to do so.

At the conclusion of the talks, which took place in several sessions over the course of the day, both parties release a joint statement. Here’s what was decided:

1. North Korea will send a delegation—including athletes, supporters, and press—to the Winter Olympics. Though this is a reflection of Kim’s expressed desire to see his country participate in the Games, North Korea does not boast about its winter sports. Only two North Korea athletes, figure skaters Ryom Tae Ok and Kim Ju Sik, qualified for the Olympics before the October 30 deadline for countries to accept their invitations to the Games. The International Olympic Committee, currently reviewing the delegation from Pyongyang, has extended this deadline in the interest of allowing North Korea to participate. It will be North Korea’s first appearance in Olympic Games hosted by South Korea; they have boycotted the previous three (hosted in 1988, 2002, and 2014).

2. Negotiators agreed that military talks, designed to ease tensions between the North and South, will resume. That said, the terms and specifics remain uncertain. Cho, South Korea’s unification minister, also announced the countries will pick up discussions on deescalating the aggression from the North, particularly significant in light of Pyongyang’s most recent intercontinental ballistic missile (ICBM) tests. However, Ri expressed frustration at the notion that denuclearization would be included in the talks, saying it is not up for discussion. To reassure the South, he said: “All our weapons, including atomic bombs, hydrogen bombs and ballistic missiles, are only aimed at the United States, not our brethren, nor China and Russia.” The practical application of the negotiations remains uncertain. The two longstanding enemies have a history of failed rapprochement.

January 10: Trump expresses optimism at Pyongyang’s decision to participate in the Olympics, and claims he would be open to speaking with North Korea at the appropriate time and under the right circumstances. However, North Korea’s warming relations with the South will not change the US stance towards its adversary absent a meaningful end to North Korea’s nuclear testing.