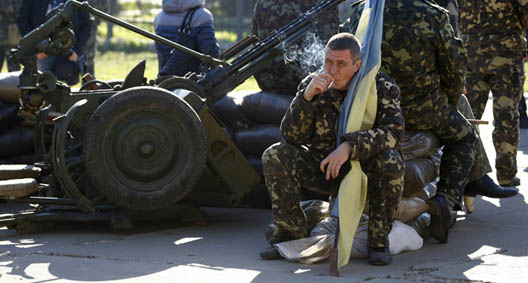 Ukraine’s dismemberment by Russia dangerously weakens global security by inadvertently encouraging Iran, North Korea and other governments to stay determined in their efforts or dreams of building nuclear weapons. In any nuclear disarmament negotiation now, international assurances of protection for a de-nuclearizing state will ring hollow when measured against those given to Ukraine two decades ago. Ukraine gave up what then was the world’s third-largest nuclear arsenal, inherited from the collapsed Soviet Union, in return for a solemn guarantee of its borders and security by the United States, the United Kingdom and Russia.

Russia’s successful seizure of Crimea delivers two powerful reasons for states to build and hold nuclear arms: First, Ukraine’s plight will lead them to equate disarmament with defenselessness, even for a country with a sworn commitment of protection from the United States. Second, a nuclear arsenal is any dictator’s best armor against being held to account even for bold aggression, a point underscored by Vladimir Putin’s dismissal of cautions from the West against moving on Crimea.

For those who may have forgotten, Ukraine agreed in 1994 to give up 1,900 strategic nuclear warheads – an arsenal larger than those of Britain, France and China combined – along with delivery systems. The weapons included 176 intercontinental ballistic missiles, 44 strategic bombers and hundreds of nuclear air-launched cruise missiles for these aircraft. Thus disarmed, Ukraine joined the Nuclear Non-Proliferation Treaty.

In return, three nuclear powers – the US, UK and Russia – provided security assurances that guaranteed Ukraine’s sovereignty and territorial integrity. Their promise, in a 493-word document known as the 1994 Budapest Memorandum, is worth re-reading in light of Russia’s invasion and seizure of Crimea.

“The United States of America, the Russian Federation, and the United Kingdom of Great Britain and Northern Ireland, reaffirm their commitment … to respect the Independence and Sovereignty and the existing borders of Ukraine,” the agreement says (emphasis added). The three guarantors “reaffirm their obligation to refrain from the threat or use of force against the territorial integrity or political independence of Ukraine, and that none of their weapons will ever be used against Ukraine except in self-defense or otherwise in accordance with the Charter of the United Nations.”

With Russia’s annexation of Crimea, these assurances were nothing more than a worthless piece of paper.

Whether Iranian, North Korean, Arab, Israeli, Pakistani, Indian or other, any government official launched on the nuclear path or pondering it can only have that ambition buttressed by the West’s lukewarm response to Putin’s aggressive behavior.

In parts of the world where anti-Americanism already is rife, local ruling elites will reach the conclusion to not trust the West to live up its declarations. They will come to agree with Putin’s assertions that the West always espouses double standards.

More to the point, they will reaffirm their belief that if you have nuclear weapons, nobody messes with you. They will feel that the bomb offers them real protection from Western intervention. They will believe that Russia would have had second thoughts about invading Crimea if Ukraine had kept some of its nuclear weapons.

They will observe that nuclear-armed Russia was even more aggressive in attacking its southern region of Chechnya, where a tenth of the population reportedly died and the capital city, Grozny, was destroyed. A few years later, Russian troops poured into Georgia. Unlike Slobodan Milosevic in the former Yugoslavia, however, Putin will never be sent to the International War Crimes Tribunal in The Hague. Now, Putin has been able to get away with annexing Crimea and his name has not even appeared on US or European sanctions lists.

And they will see that there is no united front against their nuclear ambitions. The Kremlin already is signaling that its posture on Iranian nuclear talks is hostage to the West’s accepting its taking of Crimea. In Tehran or Pyongyang, that only can be seen as a double-sided win: No pressure if you move ahead with nuclear weapons and then no consequences once you have them.

Image: A Ukrainian serviceman holds a flag of Ukraine and smokes at a military base in the Crimean town of Belbek, near Sevastopol March 22, 2014. REUTERS/Shamil Zhumatov