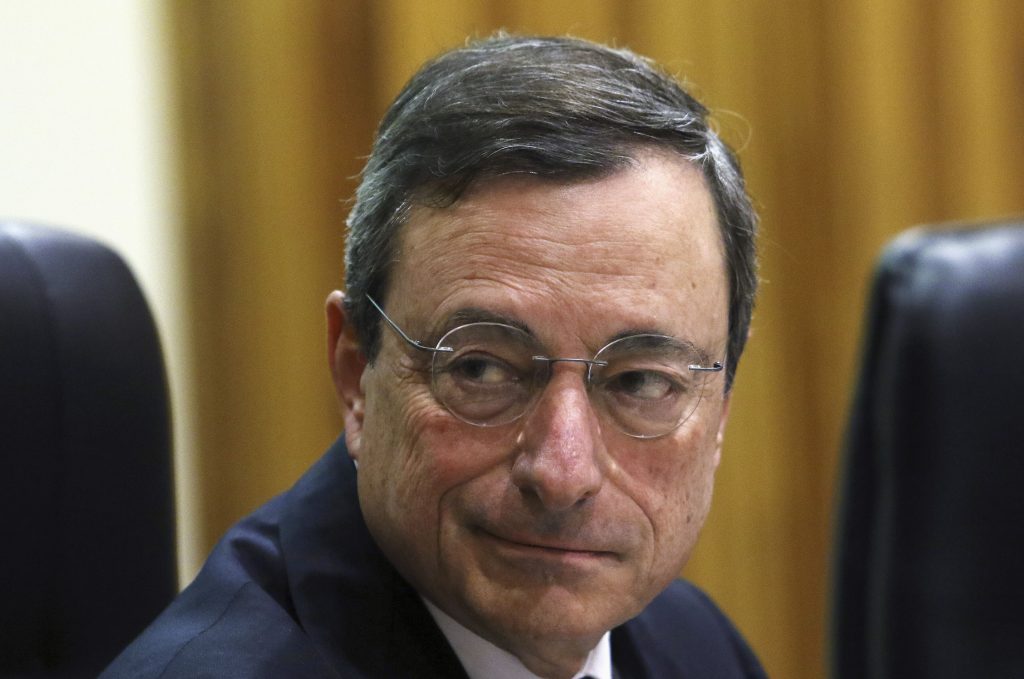 QE benefits will depend on ‘many factors exogenous to monetary policy,’ says Atlantic Council’s Roscini

The European Central Bank (ECB)’s €1.1 trillion attempt to energize the eurozone economy will have several positive effects, but these will depend on “many factors exogenous to monetary policy,” says the Atlantic Council’s Dante Roscini.

The ECB this week began its bond-buying program, also known as quantitative easing (QE). It is the last major bank to join the US Federal Reserve, the Bank of Japan and the Bank of England in using QE as a monetary tool during financial crises.

In an interview with the New Atlanticist, Roscini, a Nonresident Senior Fellow at the council’s Global Business and Economics Program, made some predictions about how QE will affect the 19-nation eurozone. Among them:

1.     The euro’s devaluation against other major currencies will make European products more competitive and boost exports to countries outside the eurozone while, by making foreign products more expensive, it will trigger some inflation, which is alarmingly low in many eurozone countries;

2.     QE will keep interest rates low, leading to a wealth effect that will lift the confidence of consumers and companies;

3.     The purchasing of sovereign bonds will lower borrowing costs for highly indebted governments, which can then channel the savings towards specific fiscal stimuli.

Consumers stand to benefit from QE as banks lower interests rates on loans and mortgages, and are more willing to lend, said Roscini.

“These effects should encourage an increase in personal consumption spending and drive economic growth. Conversely though, the lower value of the euro will make everything that is imported more expensive for the European consumer,” he added.

Roscini shared his thoughts on QE in an e-mail interview with the New Atlanticist’s Ashish Kumar Sen. Excerpts below:

Q: What is Quantitative Easing and how is it supposed to work?

Roscini: Quantitative Easing is a non-traditional form of monetary policy that a central bank enacts when interest rates are so low that it has lost the ability to stimulate the economy simply by lowering them. The central bank creates money (being the only institution allowed to do so) and uses it to buy financial assets in the secondary market, including treasury bonds. Selling assets to the central bank and replacing them with cash allows commercial banks to have more cash available to finance economic growth. Also as it purchases bonds in the market, the central back reduces their supply and therefore drives up their price, which, in turn, lowers their yield. Lower bond yields mean reduced costs for borrowers, especially at the long maturities. Through these channels, QE helps to stimulate the economy.

Q: What effect will the European Central Bank’s launch of QE likely have on European economies?

Roscini: The European Central Bank is the last of the world’s major central banks to adopt a QE policy. The Fed, the Bank of Japan and the Bank of England have implemented large-scale QE programs since early on in the global financial crisis. By lowering the euro area interest rates, QE will have several effects on European economies.

The first is that the euro will devalue against other major currencies—it has lost over 15 percent against the dollar since there has been talk of QE—because investors would rather hold currencies that pay higher interest. This will make European products more competitive and boost exports to countries outside of the eurozone while, by making foreign products more expensive, it will allow the import of some inflation, which is currently worryingly low in many eurozone countries.

The second is that by keeping interest rates low for a long period, investable capital will be looking for higher yields, which should lead to an increase in the value of risk assets from stocks to real estate. This wealth effect will have a beneficial impact on the confidence of consumers and companies alike who should feel encouraged to spend and invest.

Finally, the purchases of sovereign bonds will lower the costs of borrowing of highly indebted governments that will be able to employ the savings toward more incisive fiscal stimuli.

Of course these are the theoretical effect. What will happen in reality depends on many factors exogenous to monetary policy.

Q: What does QE mean for consumers?

Roscini: The direct effect of QE on consumers should be felt through lower interest rates on bank loans and mortgages. Also we should see more willingness on the part of the banks to lend to consumers. These effects should encourage an increase in personal consumption spending and drive economic growth. Conversely though, the lower value of the euro will make everything that is imported more expensive for the European consumer.

Q: What is required besides monetary easing to spur economic growth?

Roscini: In order to maximize the growth effects of a monetary stimulus, a fiscal one should ideally be applied at the same time. Europe finds itself at the other end of the spectrum in terms of fiscal stimulus because of the drastic austerity policies that have been implemented since the crisis in order to rein in the deficit imbalances and the large public debt accumulated in many countries. This austerity has had a negative impact on aggregate demand and Europe has lived with very low inflation for many months, potentially running the risk of deflation. Nevertheless, QE might buy time for the governments of some of the peripheral countries to implement some of the structural reforms that will unshackle their economies from the rigid labor and product markets that have slowed their growth. Also, QE in Europe arrives at a time when oil prices have fallen dramatically, significantly lowering the bill of an energy-hungry continent, and when the US economy can provide a growth engine for the rest of the world. So while QE alone cannot spur economic growth it is a welcome policy development for the eurozone.

Q: How did the United States respond to QE six years ago?

Roscini: The first round of QE in the United States was successfully implemented by the Fed in order to restore the functionality of financial markets. It provided relief to a banking system that was impaired by the imploding housing market bubble and helped to restore confidence in a deeply wounded financial system. Subsequent rounds of QE were designed to stimulate an economy that was severely weakened. While it is difficult to isolate the effects of QE, it is undeniable that the United States is ahead of many other regions in its recovery from the financial crisis: unemployment has fallen to pre-crisis levels, the stock market has more than doubled and corporate profits have soared. Interestingly, at least so far, the predictions of runaway inflation and dollar debasement have not materialized as inflation has remained under control while the dollar has held up against the major currencies. So while QE was only one of the measures implemented in the United States to combat the financial crisis and we do not have the counterfactual of what would have happened without QE, I believe it was ultimately a very effective policy.