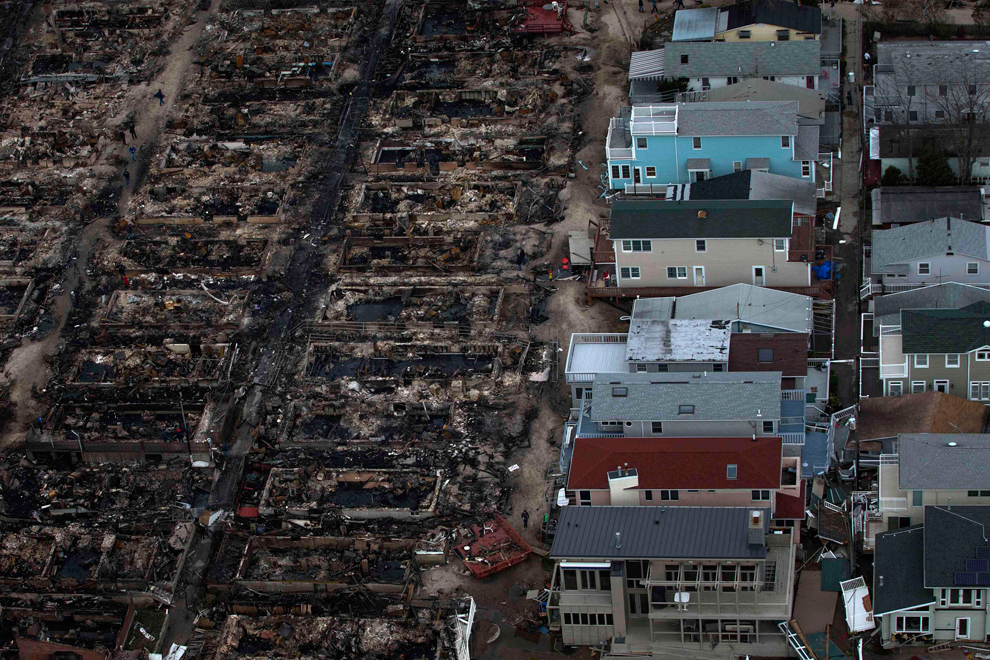 Polish-born nuclear physicist Marcin Jakubowski and his small band of acolytes are holed up in rural Missouri working on a “civilization starter kit.”

Bloomberg Businessweek headlines the experiment “The Post-Apocalypse Survival Machine Nerd Farm.” Is this the future of American innovation? asks the magazine.

The answer might be affirmative after reading the same issue’s cover line in large black letters on a red background — “IT’S GLOBAL WARMING, STUPID”

“If Hurricane Sandy doesn’t persuade Americans to get serious about climate change, nothing will,” says cover story writer by Paul Barrett.

After millions of years undisturbed by man, human-induced climate change shrunk the North Pole’s ice cap by half in 30 years.

Some scientists argue it’s an accumulation of man-made contributions in two world wars, including atomic bombs on Hiroshima and Nagasaki, followed by the Cold War and hundreds of nuclear tests, as well as two major wars in Korea and Vietnam.

Two atomic bombs unloaded on Hiroshima and Nagasaki killed 140,000, injured some 200,000 and ended the war. But atomic and nuclear testing continued throughout most of the Cold War.

Scientists said radiation would stay deep underground but it bubbled back to the surface.

There were also tests that produced fallout onto populated areas. In the Pacific, island populations were evacuated with severe radiation burns.

From 1940-96, the United States spent $8.6 trillion on nuclear weapons development and about $1.2 billion in compensation was paid to U.S. citizens exposed to nuclear hazards as a result of tests.

Some $800 million was also paid to the Marshall Islanders for similar compensation.

There have been 20 major mishaps that could have started an accidental nuclear war.

The nuclear weapons production complex is spread over 19 sites from California to South Carolina.

In a study commissioned by the U.S. intelligence community, NRC forecast that global warming is producing seemingly unrelated crises in everything from water and energy supplies to food markets and public health systems.

Hurricane Sandy is simply Mother Nature’s opening salvo of something that will be a lot more damaging in the next few years.

The NRC report was about to be briefed to the intelligence community when Sandy hit New Jersey and New York. More rapid climate change and its threat to the United States and other coastlines are no longer idle scientific speculation.

The 206-page study warns of catastrophic over-the-horizon events of much greater magnitude than Sandy’s destructive impact that left thousands homeless as houses snapped like firewood.

New generations have long since forgotten, assuming they ever knew, about the magnitude of devastation in World War II — e.g., 12,000 heavy bombers shot down and over 100,000 bomber crewmen killed in action. About 40,000 men served in German U-boats in World War II. 30,000 never returned to base.

A few years later, the United States aimed twice the tonnage dropped on Germany at targets in Vietnam and Laos (the latter against Ho Chi Minh supply trails from North to South Vietnam). Laos alone was hit by 2.5 million tons, including 260 million cluster bombs.

To argue that World War I and II, Korea and Vietnam, had no impact on the Earth’s envelope stretches credulity.

Unfortunately, we live in the age of social media where 140-character tweets are treated as news and newspapers are relegated to a glance online. Newspapers are still held with both hands but only by those with time on their hands. Social media and blogs now rule the roost.

Magazines are no longer read by younger movers and shakers who navigate their cyber future on line seemingly oblivious to earthly cares and concerns.

“If Hurricane Sandy doesn’t persuade Americans to get serious about climate change, nothing will,” says Businessweek.

When this reporter was born there were 2 billion people in the world and only 32 million cars in use. Today, those same figures are 7 billion people and more than 1 billion automobiles.

More than half of today’s 7 billion humans are under 25. And about 2.5 billion are on the Internet.

On CBS’ “60 Minutes,” historian David McCullough said last week, “we’re training young people who are, by and large, historically illiterate.” Of those who enter ninth grade, one survey indicates, only 37 percent are ready for college. In New York, that same figure drops to one-in-five.

Fertility rates continue to fall but the global population continues to grow. As do slum dwellers, now estimated at about 1 billion worldwide.

The National Research Council has sounded a global alarm. But Republicans in Congress opposed the CIA’s plan for a climate change center.