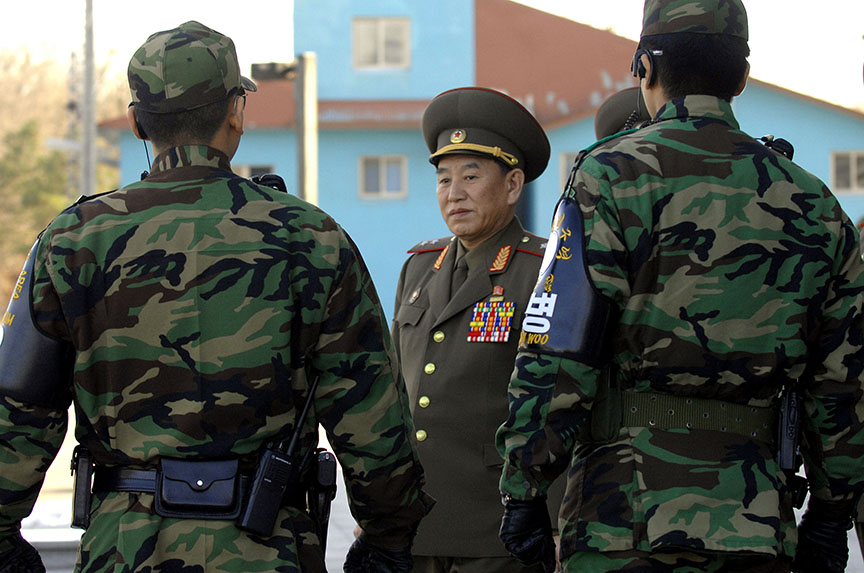 North Korean Gen. Kim Yong-chol (center), seen in this 2007 photograph, will lead his country's official delegation to the closing ceremony of the Winter Olympics in Pyeongchang, South Korea. Kim, a former head of North Korea's main spy agency, is believed to be the mastermind of several attacks on South Korea as well as the cyber hack of Sony Pictures. (Reuters/Jung Yeon-Je/Pool)

North Korean Gen. Kim Yong-chol is believed to have orchestrated a deadly attack on a South Korean warship, the bombardment of a South Korean island, and, possibly, the cyberattack on Sony Pictures.

Now, the former North Korean spy chief is on a different mission. Kim Yong-chol will lead his country’s delegation to the closing ceremony of the Winter Olympics in Pyeongchang on February 25. There he is expected to meet South Korean President Moon Jae-in to pave the way for a peace summit proposed by North Korean leader Kim Jong-un.

The diplomatic thaw between North and South Korea follows several months of missile and nuclear tests by Pyongyang and is playing out in the high-wattage arena afforded by the Winter Olympics.

But, first, who is Kim Yong-chol?

Kim Yong-chol served as the head of the Reconnaissance General Bureau, North Korea’s main spy agency, until at least 2016. The bureau handles the state’s clandestine operations.

“It is not an accident that Kim Jong-un is sending him to the Olympics,” said Manning.

But Kim Yong-chol has a past that leaves some South Koreans with a bad taste in their mouth.

He is the purported mastermind of the sinking of a South Korean destroyer. On March 26, 2010, the Cheonan was struck by a North Korean torpedo while in the Yellow Sea. Forty-six South Korean sailors were killed.

He is also suspected to have a hand in the North Korean bombardment of Yeonpyeong, a South Korean island, on November 23, 2010. Four South Koreans were killed in that attack.

And, Manning said, Kim Yong-chol is also believed to be involved in the Sony Pictures hack in November of 2014 in which a hacker group exposed confidential data at great cost to the film studio.

As a result of this not-so-distant history, Kim Yong-chol was the subject of US and South Korean sanctions, which included a ban on his travel to South Korea.

South Korea lifted the travel ban as a goodwill gesture and an insurance policy against North Korean disruption ahead of the Winter Olympics.

While many ordinary South Koreans are angry about Kim Yong-chol’s impending visit to their country, the government in Seoul has welcomed it as an opportunity to advance peace.

How can Kim Yong-chol advance peace?

At his meeting with Moon, Kim Yong-chol is expected to discuss ways to create the conditions for a North-South summit.

South Korea’s president is open to dialogue with North Korea—under the appropriate conditions.

From a South Korean perspective, Manning said, there should be three minimal requirements to set the stage for—and justify—a North-South peace summit. These are: a moratorium on missile and nuclear tests by North Korea; the 1991 North-South reconciliation agreement, which never got implemented, should serve as the basis for the summit; and there should be a clear acceptance by North Korea of the principle of denuclearization as the end state.

Kim Yo Jong delivered the invitation to the summit on behalf of her brother, Kim Jong-un, when she met Moon in Seoul on the sidelines of the Winter Olympics on February 10.

Kim Yo Jong led North Korea’s official delegation to the opening ceremony of the Winter Olympics and Manning said her presence in South Korea as a “brilliant public relations move” by the North Korean regime. She was seen to present a softer face of a regime that is notorious for its flagrant violations of human rights.

Three Americans are currently being held in North Korean prisons notorious for their harsh conditions.

US Vice President Mike Pence, who led the official US delegation to the opening ceremony at Pyeongchang, took along with him Fred Warmbier, the father of Otto Warmbier, the American who died after slipping into a coma following seventeen months of detention in a North Korean prison.

Manning said the fact that Pence ostentatiously condemned North Korea’s human rights record was understandable, but that it is a question of tactics, and he personally would put the release of the three American prisoners at the top of his list of priorities.

Pence’s rhetoric and actions raise questions about US priorities when it comes to North Korea, said Manning. “Is it nuclear weapons or human rights? We cannot have everything all at once.”

Ahead of his arrival in South Korea, Pence had promised the “toughest and most aggressive” economic sanctions against Pyongyang. And while in South Korea, he and Kim Yo Jong pointedly did not acknowledge each other despite being seated a few feet apart at the opening ceremony.

The Washington Post reported earlier this week that the North Koreans abruptly backed out of a secret meeting with Pence.

The State Department confirmed that Pence was scheduled to meet Kim Yo Jong and Kim Yong Nam, North Korea’s ceremonial head of state, on February 10. The Trump administration has long maintained that it will not entertain talks until North Korea agrees to give up its nuclear weapons.

“It is typical North Korean playbook that when you do something they can take offense at they use that as an excuse to back out and blame the other side.” said Manning. “One wonders how much they really wanted the meeting, and how much it may have been pressure from Beijing.”

Ivanka to the rescue?

US President Donald J. Trump’s daughter, Ivanka, will lead the US delegation to the closing ceremony of the Winter Olympics. The choice is an interesting one given that Kim Jong-un dispatched his sister to the opening ceremony.

Manning said Ivanka Trump’s trip to South Korea is “intriguing.” He wouldn’t be shocked if she met Kim Yong-chol after the earlier foiled attempt at a secret meeting between Pence and Kim Yo Jong.

While such a meeting would be a long shot, Manning said that if it were to take place it would present an opportunity to put the US position on denuclearization of the Korean Peninsula on the table.

Ivanka Trump could also raise the issue of the American prisoners, he said.

In the past, the North Korean regime has released American prisoners after high-profile visits by Americans—Bill Clinton, for example, traveled to Pyongyang in 2009 and posed for an awkward photo opportunity with Kim Jong-un’s father, Kong Jong-il, before leaving North Korea with two American journalists who had been taken prisoner.

Former US President Bill Clinton (seated left) and North Korea’s leader Kim Jong-il (seated right) posed for a picture in Pyongyang in this photo released by North Korea’s official news agency, KCNA, on August 4, 2009. Clinton made a surprise visit to North Korea to secure the released of two jailed American journalists. Kim Jong-il died in 2011 and was succeeded by his son, Kim Jong-un. (Reuters/KCNA)

Manning said he would not be surprised if North Korea pulled a similar stunt and offered to release the three American prisoners to Ivanka Trump—as long as she traveled to Pyongyang to take them home.

Robert A. Manning is a senior fellow in the Atlantic Council’s Scowcroft Center of Strategy and Security. Follow him on Twitter @Rmanning4.