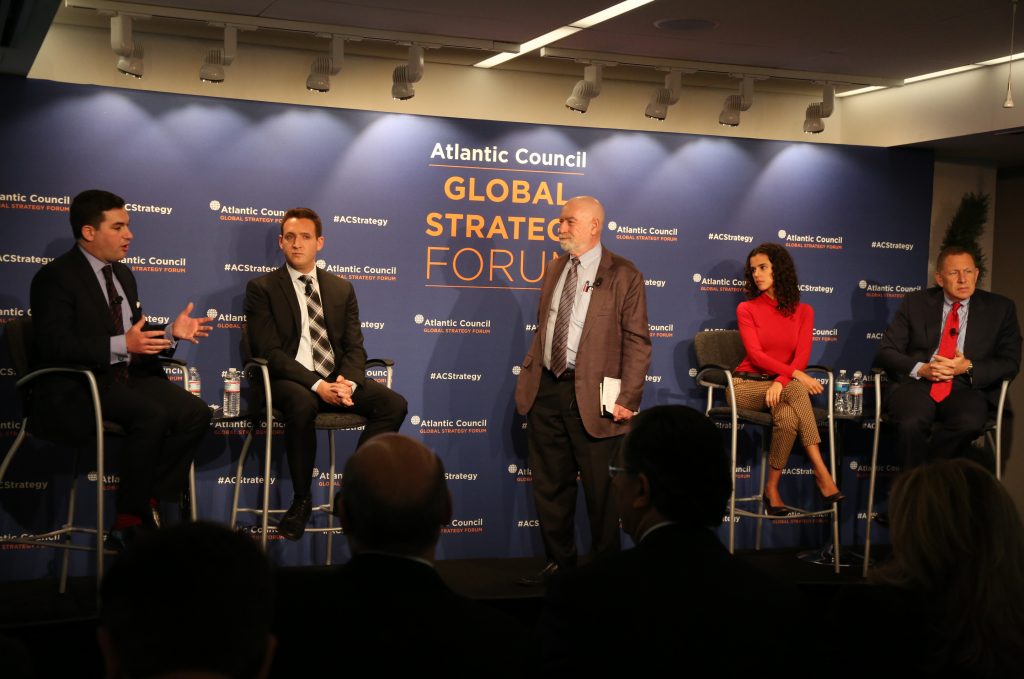 A Brazilian woman trying to interest her fellow citizens in municipal politics joined a State Department official, a Pentagon strategist, and the publisher of Foreign Policy magazine April 30 for an Atlantic Council discussion titled “Imagining Solutions.”

The lively discussion—covering topics from Rio de Janeiro’s impoverished favelas to the worldwide explosion in smartphones—marked the last of four sessions comprising the two-day Global Strategy Forum sponsored by the Strategy Initiative of the Atlantic Council’s Brent Scowcroft Center on International Security.

Alessandra Orofino co-founded Meu Rio [“My Rio” in Portuguese] three years ago and serves as its Executive Director. She said her nonprofit organization has grown to more than 200,000 registered members—half of them in their twenties. That means one out of ten city residents in that age group now belongs to Meu Rio.

“We provide people with technology to make it easier for them to work with each other and actually make demands on their government,” she said. “I come from a city where entire communities were built from the ground up, where not one single piece of public infrastructure was put in place by the government—yet where people feel they have no power over the government. They feel like they have no stake.”

Orofino said her unusual background—her mother came from a very wealthy family, with maids and a mansion on Copacabana beach, and her father from a dirt-poor family from the slums—gave her a sense of how unevenly her city of 12.6 million has grown.

She said that cities embody two of the world’s biggest challenges: climate change and economic inequality, which implies the systematic exclusion of entire groups of people.

“Decisions made by mayors and city administrators affect people really quickly, and right there in their communities and neighborhoods. But people are disengaging from city politics a lot faster than they’re disengaging from national politics,” she said. “At the city level, voter turnout rates are systematically lower than in national elections, everywhere.”

Brazil, which got rid of its military dictatorship in 1985, contains two of Latin America’s biggest cities—São Paulo and Rio de Janeiro—and at least a dozen other municipalities with one million or more inhabitants. It’s also a highly urbanized society; urban areas are home to 81.3 of every one hundred Brazilians, according to the latest census.

“I try to engage citizens in local politics,” said Orofino, adding that her nonprofit work focuses on bread-and-butter issues like sanitation, education, and healthcare. “I come from the first generation of Brazilians who were born under a democracy. We were told growing up that we didn’t really care about our democratic institutions because we didn’t have to fight for them. But that doesn’t means we don’t care about it.”

Orofino’s goal, she says, is to see her fellow cariocas—as natives of Rio are known—participate in municipal politics from the ground up, every single day of their lives.

Joshua J. Marcuse, Policy Innovation Advisor at the Pentagon, and Zvika Krieger, Senior Advisor for Strategy at the US State Department, outlined a different type of challenge.

The two officials discussed “how we can bring innovation in places that are generally hamstrung by conventional wisdom.”

Presenting seven observations about solving problems—ranging from “thinking big” and “focusing on the solution”—Marcuse and Krieger said all seven principles were wrong.

“They’re not what we need to engage with and counter the complexity of the challenges we face today,” said Krieger, a former advisor to US Defense Secretary Chuck Hagel. “Instead of thinking big, how about thinking small? Start with the unknown, and learn. Instead of measure twice and cut once and being very deliberate, start with a rough prototype. Instead of being bold and decisive, place lots of small bets, spread the risks and see what works in the real world.”

Krieger added: “Instead of focusing on finding the solution, find the right problem. Leveraging data and analytics is important, but we need to complement that with human insight and real-world experience on the ground, broadening our perspective. Experts are important, but empower diverse stakeholders.”

However, the US political and defense establishment has long taken the wrong approach to the most serious issues facing this country, warned David Rothkopf, publisher of Foreign Policy magazine.

“We are at a moment of strategic crisis in Washington. We react, we deal with narrow-minded political issues, we don’t think of the long term and we don’t have the right people,” complained Rothkopf, who is also CEO and Editor of the Foreign Policy Group. “The institutions within the US government that were created in order to develop strategy have atrophied or are failing at their jobs. Their leaders are not strategic, they are unable to govern effectively, and they are not able to implement strategy. We seem to be adrift.”

That began on Sept. 11, 2001, when the terrorist attacks by al-Qaeda—which Rothkopf said at that time had no more than 100 core members—triggered a massive shift in US policy.

“Our immediate reaction was to treat them as though they were analogous to the Soviet Union. We reorganized our national security apparatus from top to bottom, in the biggest reorganization since 1947,” Rothkopf said, noting the swift establishment of both the Department of Homeland Security and the Office of the Director of National Intelligence.

“We shifted our focus to dealing with counterterrorism as a central objective. Although any President would have and should have responded to those attacks, we made a terrible mistake,” he said. “We began to focus on the wrong thing. The terror threat was real but narrow, and the world was changing in fundamental ways that would affect the United States—and we stopped focusing on those things.”

Instead, he suggested, Washington should have been paying attention to the rise of emerging powers and the “hollowing out” of the US economy, as well as the most important trend of all: the explosive worldwide growth of Internet-enabled devices.

In 1990, said Rothkopf, the world had twelve million cell phones. By October 2014, there were more cellular devices on the planet than people.

“By 2020, there’ll be fifty billion devices attached to the Internet,” he predicted. “Every aspect of life will be impacted in profound ways. We are at the very beginning of the information revolution. What happens in the next twenty years will make what happened in the last twenty seem like nothing.”

Indeed, Rothkopf pointed out, ten million Tanzanians already access their bank accounts via mobile devices—and the trend will only keep on growing.

Yet he said a lengthy study found that of 12,000 recent think-tank events in Washington, only 150 were about science and technology—the least represented of any category.

“The think tanks aren’t thinking,” he said. “In today’s world, you can’t get an education, get a job, conduct business transactions, compete or grow without being on the Internet. The vast majority of economic, social, and military activity on the planet today takes place online. But we don’t have even the fundamentals we need to formulate strategy on this. At the highest levels of government, people don’t understand the new technology.”