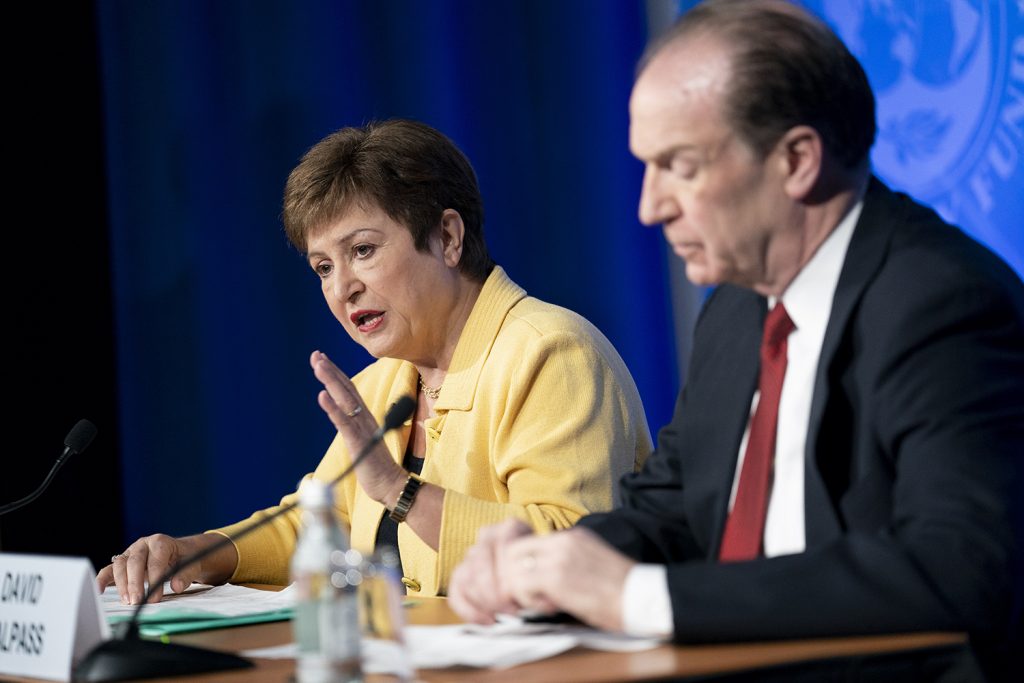 Georgieva, who spoke at a Front Page event with Atlantic Council President and CEO Frederick Kempe, explained that the coronavirus pandemic has triggered a “truly global crisis” for the economy as “it is hitting us simultaneously everywhere,” forcing policymakers to effectively “stop the global economy.” The IMF now projects that 170 countries could experience negative per capita income growth this year, a stark contrast to the Fund’s initial projections for this year which showed likely growth in 160 countries, according to Georgieva.

She further warned that “it can get worse if in the second half of the year there is still a significant lingering impact of the pandemic that forces either a return to lockdown[s] or a very slow reopening of economies,” not to mention the possibility of a larger second wave of infection. She stressed the huge impact of the “uncertainty that comes from this novel virus—we just don’t know what is going to happen next,” which is straining the ability for businesses and governments to plan ahead.

Emerging markets are a particular area of concern, according to Georgieva, as “on top of being hit by the pandemic itself and having to join the great lockdown, they are faced with additional very serious problems.” The drop in oil and commodity prices have cut off vital income sources for many of these countries, she explained, while countries “that depend on the injection of capital—and practically everyone in this group depends on that—are seeing flight to safety of gigantic proportions,” by investors that she argued is “much bigger than in the global financial crisis.”

Georgieva said that the IMF estimates that $100 billion have left emerging markets because of the uncertainty around the crisis, while remittances to these countries have fallen by 20 to 30 percent already. “I am worried about countries that even before this crisis were in a weaker position,” Georgieva explained. “The same way the virus hits more severely those have preconditions [or] weaker immune systems, the [economic] crisis hits weaker countries much more severely.”

The IMF is ready to provide support for these countries to help weather the storm, Georgieva maintained. She explained that the Fund has already received “over one hundred requests” for support and “in six weeks we got almost half of these requests processed and the money disbursed.” She said emerging markets could need as much as $2.5 trillion in assistance, but that she has heard from Fund ministers that “all options are on the table and if more needs to be done we will be able to step up and do it.” The Fund, she explained, has “four times more money today than before the global financial crisis,” as that experience “pushed the world to expand the capabilities of the Fund. We have $1 trillion lending capacity.” She maintained that the Fund is already “a lender of last resort,” for many emerging markets and is “acting as such for the countries that have received already lifelines and emergency financial assistance.” These countries “have one message to the Fund,” she added, “thank God you are there.”

The Fund is also looking into expanded Special Drawing Rights (SDRs), which were used in the global financial crisis to provide emergency liquidity for all IMF member countries. Georgieva acknowledged that SDRs have “downsides,” including the amount of time they take to implement (five months during the global financial crisis) and the fact that “it goes to everybody—it goes to countries that need it and to those who don’t.” She said that the Fund is looking into existing SDRs and exploring ways to “transfer” these from wealthier countries to smaller countries to achieve a “major injection of liquidity.” While there is growing opposition to the use of SDRs within the US administration currently, Georgieva argued that the Fund has to “act with what we have now,” to forestall further damage in emerging markets.”

Georgieva also praised the significant actions governments have taken to provide stimulus for their own countries during this crisis. As a new tracker from the Global Business and Economics Program—which Georgieva described as an “important contribution”—shows, Group of Twenty (G20) countries have implemented massive stimulus measures, but have varied widely in their size, especially when compared to their response to the global financial crisis. Georgieva acknowledged that China is currently not spending as much as its counterparts, but explained that China “does not have that much in terms of fiscal space” compared to 2008-2009 when it “led the emerging markets out of the global financial crisis.” But she is confident, however, that there will be “more done by China” in the coming months as they look at a “second fiscal stimulus…to push the recovery.”

Mounting debt from these fiscal actions will certainly continue to be a concern, but Georgieva argued that “interest rates are likely to remain low for a long time,” and “in 2021, we could see debt stabilizing but still in relatively not dramatic conditions in terms of how much you pay to service this debt.” She commended an agreement to place a moratorium on bilateral debt payments that could come into force by May 31, and reported that “good progress is being made with private creditors so they can join voluntarily on a basis of standardized approach…so there is no risk of moral hazard from others winning [because] some [are] doing the right thing.”

Still, she argued, more needs to be done at the international level to launch a “coordinate fiscal stimulus that can generate a new momentum for the global economy.” She explained that she does not only want to “mobilize resources—especially for the most vulnerable people and countries—but give a platform for us as humanity to come together and aim to have a better world on the other side of this crisis. And it is possible.” As policymakers rightly focus on their own domestic needs, she emphasized that “it is actually very important not only to act, but to build unity of purpose in action.” She said it has been her organization’s “extra responsibility to bring a strong international response. Urge for it, call for it, beg for it, champion it.”

Georgieva also stressed that while the damage from the current pandemic will be severe, there will also be “tremendous opportunities to shift the economy more quickly to the knowledge economy and to have a mechanism for our tax policies and overall macroeconomic policies…that would bring a fairer standing of people and countries on the other side.” She highlighted the fall in oil prices as an impetus to end subsidies for fossil fuels and the increased importance of food chain sustainability as a potential trigger for transforming the agriculture sectors. Policymakers will in the short term certainly focus on finding a way out of the emergency, but at the same time, she argued, “a crisis should never be missed as a good opportunity to do better.”