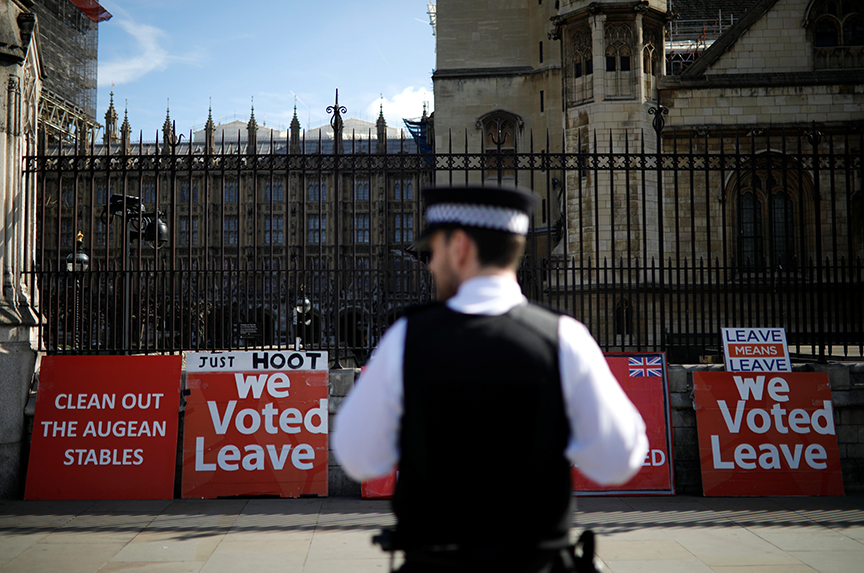 The British Parliament has taken control of the Brexit process. Or has it? The result of a crucial parliamentary vote on March 25 is that Prime Minister Theresa May’s government has only temporarily been sidelined in its efforts to control the Brexit process, and that, in the long run, it may be up to the British people to determine the ending of the whole sorry saga.

The immediate result of the parliamentary votes on March 25 is that the House of Commons will debate a series of possible options for Britain’s future relations with the European Union (EU). These debates will start on March 27 and may well continue the following Monday. (It will not have escaped our keen-eyed readers that the following Monday is, of course April 1, better known as All Fools’ Day).

The structure of the discussions and votes and these options is still being worked out. But the organizers of the successful effort to take control of the parliamentary timetable and allow this series of “indicative votes” currently appear to be working on how to structure a ranking for these votes in order to secure a compromise result that would actually command a majority in the 650-seat House of Commons.

Divisions both between parties and within parties in Parliament, and the question of whether party leaders will try to order their members to follow a particular line, make it impossible to predict just what solution will emerge.

But two points can be made.

The first is that it will almost certainly be a softer Brexit than the Withdrawal Agreement May negotiated with the European Commission over eighteen months, only to see it massively rejected by Parliament in two record-breaking votes.

The second is that the most likely way to secure a parliamentary majority for any specific recommendation on future relations with the EU would be to attach a referendum to it.

In particular, the opposition Labour Party currently favors the combination of a specific recommendation, probably including a customs union and access to the EU single market, plus a referendum over the idea of a stand-alone “Quit or Remain” referendum.

But what of the government? Traditionally, Britain has an extremely strong executive and because this executive both reflects the balance of power in the House of Commons and is predominantly drawn from serving MPs, Parliament more or less does its bidding on key issues.

On March 25, for the first time in more than a century, MPs challenged this government supremacy when they voted 329 to 302 to seize for themselves the right to set the parliamentary agenda on the Brexit issues and hold a series of indicative votes.

But it is still for the government to implement whatever the MPs might favor. And the government is not bound to implement the outcome of the indicative vote process; it can simply decline to accept whatever solution Parliament supports and continue on its own trajectory either to get May’s deal through with a further parliamentary vote or to allow the UK to crash out of the EU without any agreement, the so-called no-deal Brexit. The point was clearly made by a May loyalist, Health Secretary Matt Hancock, who told the BBC on March 26 that while it was important for government to listen to MPs, “we can’t pre-commit to following whatever they vote for, because they might vote for something that is completely impractical.”

And then there are the nuclear options, a general election or the collapse of the government in a no-confidence vote. For the ruling Conservative Party, Britain’s convoluted constitutional arrangements mean that the prime minister cannot, as previously, simply call a general election any time she wants. She now has to engineer a two-thirds parliamentary majority for a premature dissolution before the government’s five-year term expires in 2022.

At the same time the opposition Labour Party cannot assume that a no-confidence vote in the prime minister will necessarily trigger a general election, since a no-confidence vote has to be followed by a fourteen-day period to see whether anyone else can form a government that can survive a confidence vote.  And that could simply result in Conservative MPs finally persuading May that she has to quit and then choosing at least an interim leader who might be able to win a confidence vote. May herself is due to attend a meeting of the backbench 1922 committee of Conservative MPs on the evening of March 27, where she is expected to face more calls for her resignation from an increasingly disgruntled party.

If a general election was to be held, then how would the parties actually campaign, since both contain ardent Brexiteers and ardent Remainers — and everything in between? This is probably a worse proposition for the Conservatives, who are currently the more divided party, but it’s a sign of the fragility of British politics that the emphasis is not on which party is more united but which is more divided.

The need to avoid opening up existing divisions still further is not only the best reason for supposing that a general election will not be the next major development but why the MPs, during their indicative votes, could well decide to tack a referendum onto whatever conclusion they most favor — or are least inclined to reject.

Image: Pro-Brexit placards are pictured outside the Houses of Parliament in London on March 26. (Reuters/Alkis Konstantinidis)