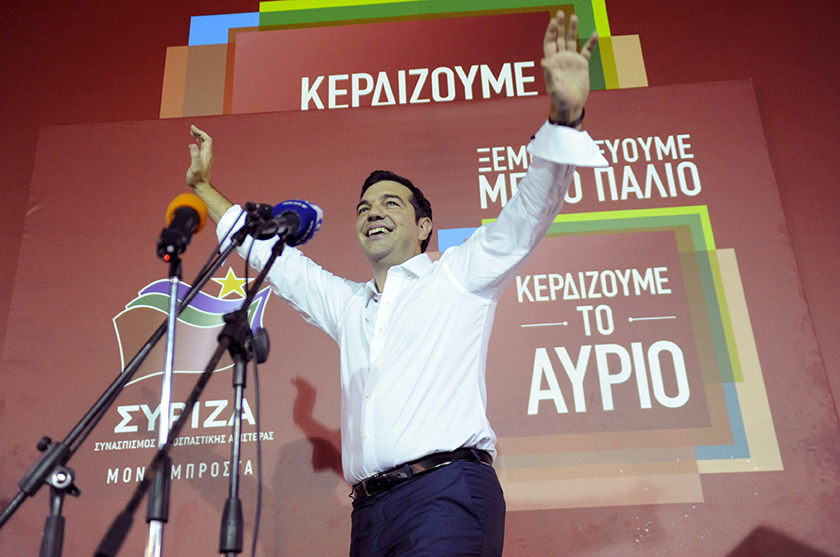 Alexis Tsipras has won his third election this year. It’s a remarkable achievement for a man who won his first election on an anti-austerity platform, his second after urging voters to support that position, and his third after doing a U-turn and accepting tough bailout conditions demanded by Greece’s creditors.

Tsipras leads the leftist Syriza party in Greece. Syriza won a majority of seats in Parliament in the September 20 election, despite twenty-five of its members having defected in August to form the new Popular Unity party, in anger over Tsipras’ acceptance of the Eurozone bailout deal.

The head of the right-wing Independent Greeks party, Panos Kammenos, said his party would join Syriza in a coalition government.

On August 20, faced with the revolt from within Syriza, Tsipras resigned from the position of Prime Minister and proposed snap elections. He sought a fresh mandate from Greek voters both for himself as well as for the tough austerity measures he was forced to accept by Greece’s creditors. Greece’s third bailout is worth $95 billion.

Turnout in the election was low and headlines in recent days have been dominated by the migrant crisis sweeping much of Europe.

That Tsipras will have no time to bask in his election victory became apparent pretty soon. In his congratulatory note to Tsipras, European Commission President Jean-Claude Juncker urged the Greek leader to implement reforms in a timely manner “so that trust returns.”

The new government will need to urgently take a number of measures, including cutting wage and pension costs, reforming early retirement, recapitalizing banks, setting a timeline for lifting capital controls, adopting more tax reforms, and privatizing much of the state electricity network.

Andrea Montanino, Director of the Atlantic Council’s Global Business and Economics Program, discussed the outcome of the vote and what’s next for Greece with the New Atlanticist’s Ashish Kumar Sen. Here are excerpts from our interview.

Montanino: The polls were quite wrong. Until a few days ago they basically showed a very close race between Syriza and New Democracy. But the Greek electorate gave Tsipras a clear mandate to go ahead and form a new government and to run the country for the next four years.

Now, to me, the big question is whether the government will have the strength to implement what they agreed with the European partners. On this I continue to have doubts, but it’s not just because of the government, it’s because in order to go ahead with all the reforms that they agreed upon requires a lot of technical expertise and political will. Most of these reforms will be unpopular.

Q: What message have Greek voters sent about austerity by returning Tsipras and his Syriza party to power?

Montanino: On one side, Tsipras fought against any kind of agreement that would increase austerity. On the other side, he signed an agreement with a lot of austerity. He had to sign that agreement because he had no choice. Now it depends on whether he will use his new political mandate to soften the terms of the agreement he signed in August.

I still believe Tsipras is for less austerity. His view is for more gradual reforms with a stronger income redistribution. I assume that he will now fight to make some changes.

Montanino: It is clear now for European leaders that they will have to deal with Tsipras for the next four years. At the end of the day, this is good news because they already know Tsipras and the way he and his party behave and bargain.

It is also good news because Tsipras is the Prime Minister who signed the current Memorandum of Understanding. He cannot reject it. With any other result from the election you could have had the new Prime Minister say, “I don’t recognize this deal because it was signed by a different government.” Tsipras cannot take that position and that is a good thing for the creditors.

On the other hand, the Memorandum of Understanding is so tough that I, frankly speaking, don’t believe it will be delivered as it is now.

Montanino: Two things. First, delaying implementation. I am pretty sure that they will renegotiate the timetable for reforms. According to the current Memorandum of Understanding, there are forty-five initiatives or reforms that should be taken over the next month. It is virtually impossible to meet those deadlines. Reforms in the pension system, taxation, and revenue system are big things that are very difficult to do in a well-organized country, but still more difficult to do in a dysfunctional country like Greece.

Second, I assume Tsipras will explicitly seek to negotiate on debt restructuring. This is probably the reason why the Greek people voted for him in the first place. They are convinced he has the strength to convince the creditors on debt relief.

Q: How willing are the creditors to reopen the agreement?

Montanino: I think they have no choice in terms of the timing. Clearly the October deadline for most of the reforms will be missed. So it is better to sit down and take note that there have been elections and there is a need for a few more months. They will start to draw up a timetable for debt restructuring—not to be done now, but to at least give a signal that this is something that is on the table.

Q: What should be the new government’s priorities?

Montanino: The new government must give confidence to the markets, creditors, and Greeks that it will seriously deal with the problems. I hope Prime Minister Tsipras will send a message of stability, which is something that Greece needs, and also give a message of being able to deliver reforms.

Tsipras will be able to find two or three big reforms that he can deliver by the end of the year to show his commitment. If this happens, you can have a different mood in Greece and things, from an economic standpoint, can improve.

Q: What are some low-hanging reforms that Tsipras can quickly deliver?

Montanino: Anti-corruption, organizing revenue services, and a good example of privatization would improve confidence in the markets.

Image: Former Greek Prime Minister and leader of the leftist Syriza party, Alexis Tsipras, waves to supporters after winning the general election in Athens, Greece, September 20. Greek voters returned Tsipras to power with a strong election victory ensuring the charismatic leftist remains Greece's dominant political figure despite caving in to European demands for a bailout he once opposed. (Reuters/Michalis Karagiannis)