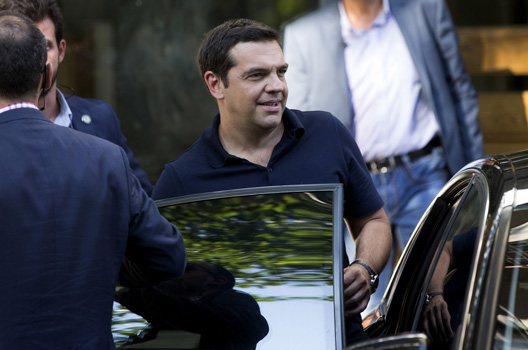 Greek voters will line up behind Alexis Tsipras in next election, says Atlantic Council’s Fran Burwell

Greek voters will rally behind Prime Minister Alexis Tsipras, who lost part of his Syriza party August 21 after he was forced by creditors to abandon his anti-austerity stance, says the Atlantic Council’s Fran Burwell.

“My guess is that the Greek people will opt to remain in the eurozone and will vote for mainstream Syriza,” said Burwell, who is the Vice President and Director of Transatlantic Relations at the Atlantic Council.

Twenty-five out of Syriza’s 149 Members of Parliament defected August 21 and formed a new party, Popular Unity, which will be led by former Energy Minister Panagiotis Lafazanis, a staunch critic of the bailout deal.

Syriza has been a fractured party since Tsipras agreed in July to accept tough reform measures demanded by Greece’s creditors. The extent of the split became evident from an August 14 parliamentary vote in which Tsipras won support for the bailout package, but lost the backing of nearly a third of his party’s Members of Parliament.

“There was a belief at the time of the referendum [in July on whether to accept the creditors’ demands] that you could stay in the eurozone and not do what the creditors wanted,” said Burwell.

“The negotiations that Syriza had following the referendum demonstrated to the Greek people that this was not true,” she added.

Tsipras resigned August 20 and proposed snap elections be held September 20 in an attempt to bolster support for the bailout package he negotiated with the creditors. Tsipras announced his resignation on the very day that Greece received the first tranche of funds under a $96 billion bailout program Tsipras had negotiated with Greece’s creditors.

Tsipras, who was elected in January on an anti-austerity platform, remains largely popular among Greek voters despite the fact that he has since abandoned that position. A July opinion poll gave Tsipras a sixty-one percent approval rating.

Tsipras could still lead what’s left of Syriza to victory in the next elections. The question on everyone’s minds is whether Syriza can win enough seats in Parliament to form a government on its own. Without a clear majority, the bailout’s fate will rest in the hands of the coalition partners in the next government.

With Tsipras’ resignation, Greece’s President, Prokopis Pavlopoulos, is constitutionally mandated to give opposition party leaders the opportunity to form a government. However, a new governing coalition that does not include Syriza, even after the split, is unlikely.

Tsipras’ resignation has plunged Greece into a period of political uncertainty.

“While there will be some people talking about instability [in the weeks leading up to the vote], what most will hope is that the Tsipras part of Syriza, which has now made the deal, will come back into office either strong enough and on its own, or potentially with the support of New Democracy and other centrist opposition figures,” said Burwell.

Fran Burwell spoke in an interview with the New Atlanticist’s Ashish Kumar Sen. Here are excerpts from our interview:

Q: What are the likely consequences of the split in Syriza?

Burwell: It means that the Greek people will now have to chose between a splinter group that is going to continue to argue that Greeks can have their cake and eat it too. That they can remain in the eurozone or maybe even leave the eurozone, but not suffer the financial consequences. And what is now Tsipras-led Syriza, which is firmly in the eurozone, at least in its aspirations, and is willing to make some structural reforms and change the way the Greek economy works.

My guess is that the Greek people will opt to remain in the eurozone and will vote for mainstream Syriza. The interesting question is whether Syriza can do this on its own.

The New Democracy party has three days to try and put together a government and before the elections are actually called the President may go through different parties and ask them to form a government. I doubt any will be successful given how divided Greek politics are right now.

Q: Do you expect the new Popular Unity to benefit from the anti-austerity wave that brought Syriza to power in January?

Burwell: It is entirely normal for populations to reluctantly conclude that they have to do the right thing and be responsible. There was a belief at the time of the referendum that you could stay in the eurozone and not do what the creditors wanted. The negotiations that Syriza had following the referendum demonstrated to the Greek people that this was not true.

Most of the reforms that are being asked for are things that many Greeks would approve of. It is very painful in the short term. I would expect that particularly given his personal popularity, Prime Minister Tsipras is going to lead his people to stick with the deal that he has made with the eurozone.

Q: But could anti-austerity parties, including Popular Unity, win enough seats in the next election to join together and form a government?

Burwell: I doubt it. I think that the experience of the last few months will show people that if they vote for those groups they are voting to leave the eurozone.

Q: Is it then fair to say that the anti-austerity message is not getting as much traction among the Greek people?

Burwell: I do feel it is not getting much traction. I would expect that we will see the Greek people largely vote for stability. That can be defined as Syriza. Six months ago we would never had said Syriza represents stability, but it does now.

Burwell: He has been very, very critical of the bailout. I think that if he decides to play a political role in Greece he will be with the Syriza rebels—Popular Unity.

Q: On the other hand, if Varoufakis decides not to join Popular Unity does that send a signal to anti-austerity Greek voters that it is OK to support Tsipras?

Burwell: I don’t think that Varoufakis really represents an alternative to Syriza. He does have a lot of personal popularity, but since he resigned as Finance Minister he has not taken on a strong political role in Greece. He has been more like a media commentator.

Q: What is the significance of the timing of Tsipras’ decision to call early elections?

Burwell: This call for snap elections is not really unexpected because Tsipras was not supported by all of his party in the vote that they had to accept the bailout arrangements with the eurozone creditors. He had to be supported by the more centrist opposition parties. Syriza has been a broken party, or a divided party, since then.

In the last week, we have seen money being issued so that Greece can pay back some debts that were owed on the 20th [of August]. The European Central Bank has also announced that it will provide some liquidity for Greek banks.

We have breathing space right now. Everything is going as it was expected to go, but there are more reforms that will have to be done, and the Prime Minister really needs stronger support to do that.

Tsipras waited until the money started to flow in this new bailout and everything was secured. The Greeks have the money now that will get them through about three months. The election will be September 20 and then there could be a couple of weeks before a government is formed. If there is good timing, this is good timing!

Q: What could be the impact of this period of political uncertainty?

Burwell: For those in the eurozone who are upset with the Greeks and critical of the Greeks, they will continue to be so, but I think that everyone recognizes that Prime Minister Tsipras has made a large shift in what he was willing to support. He walked to the brink and saw that he could not jump off, so he has turned back to accept harsher demands from the creditors than he would have had had he agreed earlier.

While there will be some people talking about instability, what most will hope is that the Tsipras part of Syriza, which has now made the deal, will come back into office either strong enough and on its own, or potentially with the support of New Democracy and other centrist opposition figures. It’s not clear that they would be willing to cooperate in that way, but we will probably not know that until after the election.

Q: Would being part of a coalition make Tsipras’ job harder?

Burwell: That depends on whom the coalition partners are. Right now, having Independent Greeks in the coalition makes it harder because it is not clear that they are committed to staying in the eurozone. Key members of that party do not agree with the terms of the bailout.

I expect Prime Minister Tsipras will go to the country and say, “I protected our interests. You know me. I look out for us. Even though this was not the deal I wanted, this is the best deal we could get. Lets move forward.” He is a very charismatic person. It is clear through these discussions over the last couple of months and the referendum [on July 5] that the Greek people want to support him. Whether there are still enough who do is an open question.

It is possible he can win enough seats so that his version of Syriza can form a government.

Q: Tsipras came to office opposing austerity. Over the course of the past few months he has done a U-turn on that position and accepted some harsh austerity measures as demanded by the creditors. Has he been hurt by this change of position?

Burwell: That is not clear at all. He does not seem to be significantly damaged in his public support. There is a certain logic that in saying that someone who said they would never agree to X, Y, and Z and then they turn around and agree to something that is tougher than X, Y, and Z should have lost the confidence of the people, but politics is not about logic. It is much more emotional and he is very good at playing on that.

Q: What are the implications for Greece and the bailout if Tsipras loses in the election?

Burwell: It depends on how he loses. If New Democracy or New Democracy and PASOK (Panhellenic Socialist Movement), the old guard, should come into office they will continue with the bailout as agreed.

The risk is that nobody wins and we have more people voting for the left part of Syriza and Independent Greeks rejecting the deal, and there is no way to get a government and we drift beyond three months. After about that time they will have to show more agreement on reforms in order to get the next tranche of money.

* This blog post has been updated to reflect new developments in Greece.

Image: Greece's outgoing Prime Minister, Alexis Tsipras, leaves his party's headquarters in Athens, Greece, August 21. Rebels angered by Greece's international bailout walked out of the leftist Syriza party August 21, formalizing a widely-expected split after Tsipras resigned as Prime Minister to pave the way for early elections. The new anti-bailout Popular Unity party set up by the far leftists is expected to steal some anti-euro voters away from Tsipras. (Reuters/Stoyan Nenov)