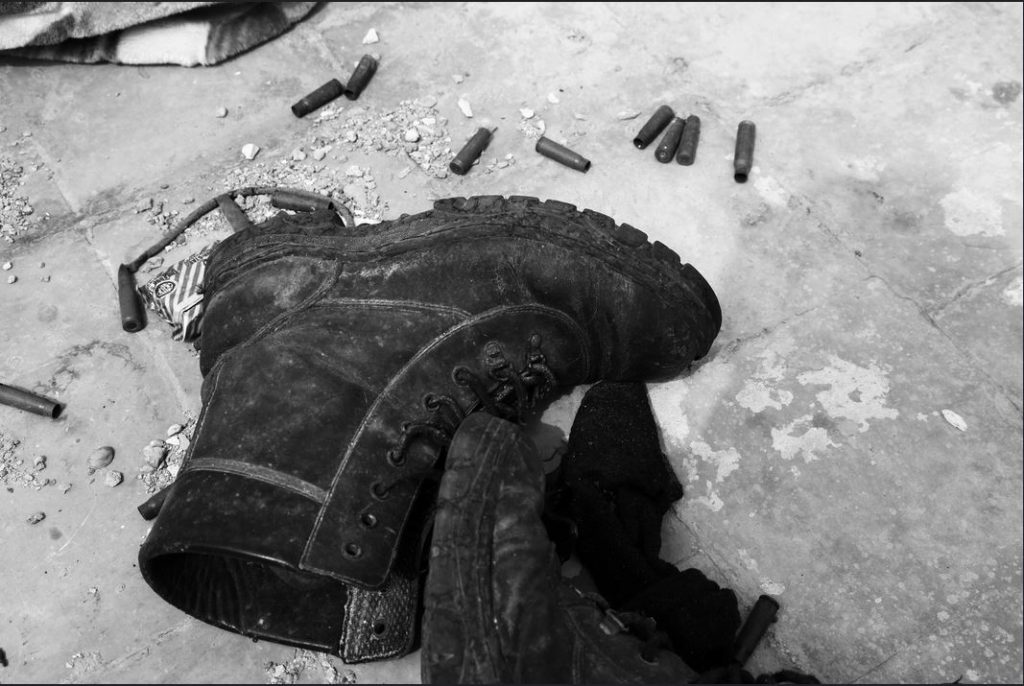 In the Libyan city of Misrata, a pair of boots lay amid spent cartridges in a position that had been used by a sniper at the start of Libya’s civil warfare in 2011. (Flickr/Mojomogwal/CCLicense)

Meddling by international actors in Libya has undermined a United Nations effort to broker peace in the North African nation, according to Karim Mezran, resident senior fellow at the Atlantic Council’s Rafik Hariri Center for the Middle East.

Turkey, the United Arab Emirates, Egypt, Qatar, and France have inserted themselves into the conflict, backing various factions that are locked in a bloody battle for power in Libya. “If all these external forces support troops on the ground, then the push for war is much stronger than the push for peace,” said Mezran.

A sharp escalation in the violence in Libya this month has injected a sense of urgency into the UN effort to find a political solution to the crisis.

On December 16, a day after the United Nations Support Mission in Libya described the military escalation as a “direct attempt to undermine the political dialogue efforts,” one of the factions agreed to participate in the dialogue. That faction, the Tripoli-based General National Congress, is one of two rival parliaments in the country. Its spokesman, Omar Hmeidan, said its participation in the talks would be conditional.

Libya has had two governments and parliaments since a group called Libya Dawn seized the capital Tripoli in August and backed the General National Congresss. The previously recognized parliament, called the House of Representatives, and its prime minister, Abdullah al-Thinni, were forced to withdraw to the eastern city of Tobruk.

Over the weekend, the Tobruk government conducted air strikes against Libya Dawn militia who attacked two oil terminals at Ras Lanuf and Sidra on the Mediterranean coast.

As rival groups battle for control, US officials have expressed concern about the emergence of Islamic State of Iraq and Syria (ISIS) militant training camps inside Libya.

Striking a deal between the two main warring factions in Libya is key to dealing with the emerging ISIS threat, said Mezran.

Q: An Islamist militia and the Tobruk-based government are fighting for control in Libya. How is al-Thinni’s government faring in its battle against the Libya Dawn, which controls Tripoli?

In May, Gen. [Khalifa] Haftar launched Operation Dignity in Benghazi. Libya Dawn was launched in Tripoli to counteract that effort. Now we have two very distinct groups fighting in Libya.

On the one hand are the troops of Gen. Haftar, who very soon was legitimized by the government in Tobruk.

On the other hand is Libya Dawn, which consists of militias from Misrata and some other cities and Islamist militias from Tripoli. In the mountains behind the capital, militia from the city of Zintan, who are closely associated with Gen. Haftar and the government in Tobruk, and the troops of Libya Dawn have been involved in a long battle.

In the south, the French are supporting the Tebu tribes. There has been a lot of talk about these troops moving north, but we haven’t seen that yet.

Q: Some of Libya’s neighbors are supporting Libya Dawn.

Until very recently, it was rumored that the main supporters of Libya Dawn were the Turks and the Qataris, while the UAE, the Egyptians, and the Saudis support Operation Dignity and the Tobruk parliament.

Recently there have been developments with the Gulf states and Qatar seems to have bowed to pressure from the Emirates and Saudi Arabia and is probably halting its support for Libya Dawn. We could now begin to see some effects on the ground because the Egyptians are continuing to very heavily support the forces of Gen. Haftar and the Tobruk government. If Libya Dawn loses the support of Qatar, I don’t know how much support the Turks can really provide. We might soon be seeing a decrease in the strength of Libya Dawn.

Q: And yet over the weekend Libya Dawn managed to shut down the Ras Lanuf and Sidra oil terminals.

In the beginning we misinterpreted the movement of Misrata, which withdrew some troops from Tripoli. We thought that was a good sign for peace, or a sign of goodwill toward Bernardino León [the United Nations’ Special Representative and Head of the United Nations Support Mission in Libya].

Instead what the Misratans were doing was withdrawing troops from the western front and pushing them to the eastern front. They unleashed a major attack against the troops of Ibrahim Jedran, the separatist leader who took control of the oil fields in central eastern Libya.

I think the forces of Libya Dawn have been held back, if not pushed back, because of heavy bombardment from the air force. What is strange is that the troops of Operation Dignity are relying very much on the air force for their projection of power. This means the troops on the ground are weak. The fact that it took them almost two months to free Benghazi, despite heavy support from the Egyptians, shows that they are not very strong on the ground.

Meanwhile, the government in Tobruk is trying to form its own national oil company and therefore delegitimizing the one in Tripoli. I think the Misratans are sending a signal to the government in Tobruk that: “We can shut down half of your oil production if we really want to, so beware of how you move.” [The shutdown of the oil terminals at Ras Lanuf and Sidran] can be interpreted not as a real attempt to conquer, but to show how much potential Libya Dawn has in projecting its power over the east and therefore effectively confronting the actions of Haftar’s troops.

Q: What are the prospects that the UN-led effort can produce a positive outcome?

As an analyst, I am not very optimistic because of the fact that the main asset for the support of Bernardino León’s mediation is the support of the international community. If the international community is monolithic and cohesive behind this attempt at negotiation then it might be successful, but we know that they are not. The Egyptians are supporting one side, the Emiratis are supporting one side, the Turks are supporting one side, and the French are intervening in the south. If all these external forces support troops on the ground then the push for war is much stronger than the push for peace. This is undermining the negotiating effort.

As a Libyan, I have to be optimistic and hope that in the end the good intentions of people will succeed. Bernardino León is a very capable mediator. If anyone has a chance to succeed it’s him.

Q: US officials are worried about ISIS training camps that have emerged in Libya. How serious is this threat and is there anything the US should or could be doing at this stage?

The best thing for the US would have been to prevent any international meddling in Libya. If that had been done — and there is still time to do it — it could have weakened the two main factions and forced them to find a negotiated solution and possibly to form a national unity government.

If you reach an agreement between the two main factions, ISIS is a minimal thing. They could be dealt with easily. If I were the US, I would first escalate my efforts to obtain a national unity government between these two main forces and afterward devote energy to taking care of the ISIS situation.

Q: Given that the chaos in Libya threatens the Mediterranean region with the flow of refugees, arms, drugs, and Islamist militants, is this situation a bigger threat to Europe and what should Europe be doing to face this threat?

The Europeans could be doing much more if they really were united. They could escalate their military involvement and they could more robustly back Bernardino León. It seems they are doing something on the surface, but once again there are signs of a lack of belief in a peaceful negotiated solution and each European power is siding with a different faction. There is a superficial standing behind the UN, but in reality there is an undermining of its effort.