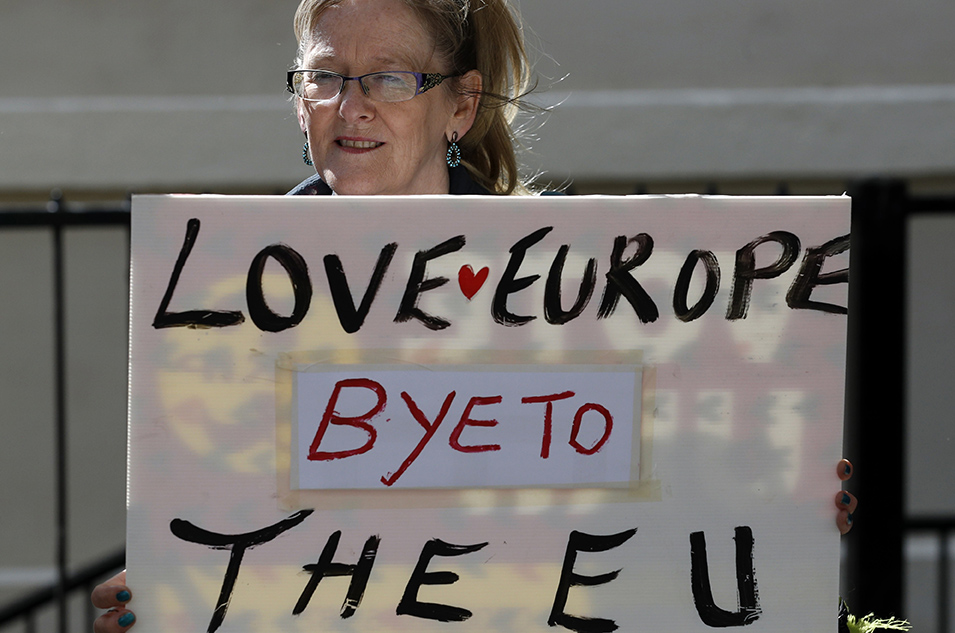 Boarding the Eurostar from Brussels to London on June 24, the British passengers still went through the “EU Members” line at passport control, while we Americans went through “All Other Passports”—for how much longer? Possibly, for quite some time, if some British leaders—including top campaigners to Leave—have their way. At the core of the issue is the need for the United Kingdom to invoke Article 50 of the Lisbon Treaty, which governs how a member state leaves the EU. This obscure portion of EU legalese has now become central to a struggle between two views of Europe post-Brexit—a struggle that will play out over the next months and perhaps years.

On June 24, Brussels woke up to two shocks. First, despite final polls the night before that indicated a narrow victory for the Remain campaign, British voters actually opted to Leave the EU. In Brussels, the mood was one of disbelief that this had happened, even among those who thought Leave was a strong possibility.

The second shock was hearing UK Independence Party (UKIP) leader Nigel Farage, Conservative Member of Parliament Liam Fox, and other prominent Leave campaigners say there was no need for a quick invocation of Article 50, and instead that there should be calm and a period of reflection.

Brussels is a practical city, driven by process. There is a keen recognition of the need for a new EU vision, but discussion often focuses on the next concrete steps. Article 50 is now the next step, but because EU secession is unprecedented, there is uncertainty about how Article 50 would be implemented. Initial expectations had been that the United Kingdom would invoke Article 50 before the European Council on June 28, but now it looks like it may be after the summer recess, or even tabled for the new British prime minister, who is expected to be named at the Conservative Party conference in October. The delay between now and the conference brings to the front two competing and contradictory versions of how Europe deals with Brexit.

One side firmly perceives Britons as having voted to leave and believes they should now face the consequences of their actions. They have watched the debate over Brexit for the past three years and believe it has infected the discourse about the EU in their country and elsewhere. They point to the rise of far-right political sentiment on the continent—namely Marine Le Pen’s National Front in France and the Geert Wilders’ Dutch Party for Freedom. They want to make the British exit so difficult and painful that it would serve as a deterrent for others. It would demonstrate to citizens that leaving the EU will result in economic challenges and forgoing valuable privileges, such as working and studying abroad. For this to happen, the process must not be drawn out. Negotiations with the United Kingdom must be tough and swift. At the same time though, EU leaders must outline a vision of an even more integrated EU, one that can better engage citizens and create growth. In this view, the best way to avoid more EU exits is to provide a better and clearer vision for the bloc and a painful post-EU experience for the United Kingdom. Only then can Europe get on with constructing a better union.

A second vision of the future is much more ambiguous. Now that the United Kingdom has voted to leave, punitive measures don’t seem very useful. The priority instead is to find a new EU-UK relationship that accommodates both sides. Invoking Article 50 without a clear understanding of what such a compromise might be will only lead to rushed and antagonistic negotiations, given that there is a two-year timeframe for exiting. But if Article 50 can be delayed and if a compromise can be found, some believe that the new British government might hold a second vote. By then, the economic consequences of Brexit would be clearer, and the British public may reconsider their views.

For this second scenario to work, however, there must be an attainable compromise. So far, every deal suggested has presented the United Kingdom with a worse position than the status quo. Will it stay in the single market but, as with other non-members, have no say in the market’s regulations? Would it ban EU citizens from working in the United Kingdom even if that means that millions of Britons living in the EU also lose their right to live on the Costa del Sol, in Paris or in Berlin? Even if such a deal can be found, reaching it would be a lengthy and acrimonious process. It would also encourage eurosceptic forces across the EU—including some governments—to think about demanding their own special deal with Brussels. This environment is unlikely to provide the right context for building a vision for a new European Union, a vision that is desperately needed.

The British referendum has not turned out to be the final word. In both the United Kingdom and the EU, leaders are now pausing to consider their options. There is an unlikely, but possible, road toward reconciliation. But that reconciliation could come at a high cost, by encouraging other special deals and an erosion of the EU’s remaining coherence. Now is not the time for drift. If the EU is to reconnect with its citizens, it needs to be clear about its ambitions and vision. As European Council President Donald Tusk remarked June 24, “What doesn’t kill us makes us stronger.”

Image: A woman holds a sign in Westminster, in central London, on June 24. British voters voted on June 24 in favor of the United Kingdom leaving the European Union. (Reuters/Phil Noble)