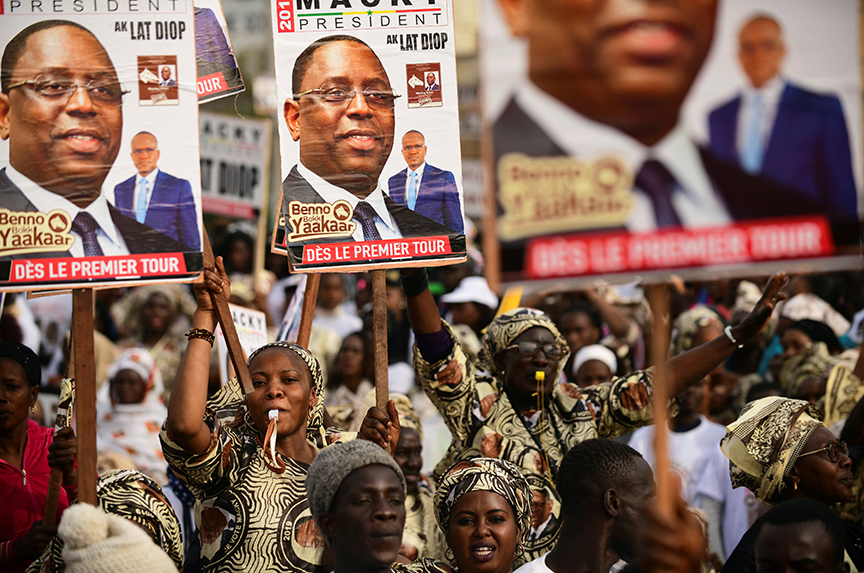 On February 24, millions of Senegalese voters are expected to head to the polls to elect their president for the next five years. While five candidates—whittled down from a whopping eighty-seven by a controversial citizen sponsorship system—are vying for the presidency, the election is President Macky Sall’s to lose.

Mindful of what’s at stake, Macky Sall, who has been in office since 2012, is keen to remind voters of some of his greatest achievements. In the last year alone, the president has inaugurated a new airport, special economic zones, and state-of-the-art sports facilities, and talked up the 200 km of highway built during his time in office.

Yet the achievement he is probably most excited to showcase is the high-speed train that links the Senegalese capital Dakar to Diamniadio, a futuristic city that is currently under construction.

As for the president’s supporters, they are spending the days leading up to the election hammering home the point that Macky Sall’s Emerging Senegal Plan, a lofty set of economic initiatives that seeks to put Senegal on the “road to development by 2035,” is the main reason behind the country’s healthy GDP growth rate of over 6 percent for the fourth year in a row.

They also argue that the Macky Sall administration’s creation of various social safety nets, including a new family grants program, an entrepreneurship fund, and a pledge to achieve universal health coverage by 2022, soften some of the criticism levelled at the government regarding the lack of inclusive economic growth since Macky Sall came to power.

Macky Sall’s challengers, on the other hand, have two main lines of attack. Much criticism has centered around the president’s record on governance issues, highlighting his administration’s perceived mishandling of last year’s trial against Khalifa Sall, which saw the former mayor of Dakar sentenced to five years in prison for corruption in proceedings his supporters claim were politically motivated. Others have focused instead on bubbling resentment towards the political class and a growing nationalist sentiment across the country.

While Macky Sall has made good governance a cornerstone of his administration—he authorized the creation of a national anti-corruption office—his opponents argue that the move was a blatant attempt to manipulate the state apparatus for political purposes. Niang and Seck have been particularly vocal on this issue, both of whom have been targets of corruption investigations themselves. They also cry foul on the new citizen sponsorship system established last June, which requires presidential candidates to garner signatures from at least 0.8 percent of the electorate to qualify as a viable candidate, as further evidence that Macky Sall is running a sophisticated vote-rigging operation.

As for the newcomer, Sonko, his candidacy has drawn comparison to US President Donald J. Trump. He has striven to make the most of Senegal’s growing nationalistic and anti-establishment sentiment. If elected, Sonko has promised to change the country’s CFA franc currency, which is seen by many as a relic of Senegal’s painful colonial past and is still pegged to the Euro. His “economic patriotism” message, reminiscent of Trump’s “America First” ideology, also gives him a certain popularity among youth.

He has also joined the lesser-known Issa Sall at times in cozying up to the radical movement France Dégage (France get out), which seeks to reduce France’s influence in Senegal, and promising to renegotiate some of the natural resource contracts the Macky Sall administration has signed with international companies.

However, none of these challengers have the clout to unseat the president. The coalition that brought Macky Sall to power 2012 has largely remained intact, and while opinion polls are banned in the run-up to election day, there is a high degree of confidence in his ability to win in the first round.

Despite this, Macky Sall’s supporters are remaining cautious. The outcome of this election will ultimately come down to what the Senegalese people make of his economic policies. If the majority approves of his leadership, he will get a clear mandate to see his economic plan through. If not, Senegal will spend the next five years charting a new and uncertain path to economic development.

Image: Supporters of Senegalese President Macky Sall, who is seeking re-election, cheer during his campaign rally in Guediawaye, Senegal, on February 20. The election is on February 24. (Reuters/Sylvain Cherkaoui)