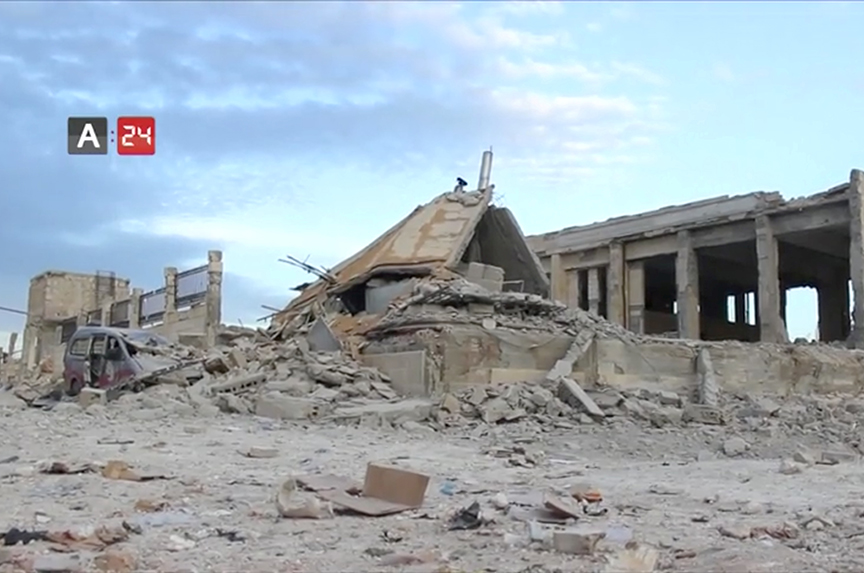 According to a Western physician who returned days ago from a mission of mercy into Syria’s northwestern Idlib Province, no fewer than thirteen hospitals have been successfully targeted by Russian combat aircraft; three of them had previously declared their geographic coordinates to the United Nations. Thus far, Russia’s hospital offensive and the Assad regime’s barrel bombings have reportedly killed dozens of civilians and put 150,000 terrified people on the road. Provided the regime of Bashar al-Assad refrains from using chemical weapons, it seems very unlikely that anyone will lift a finger to protect Syrian civilians and, by extension, defend the West.

The European Union (EU) has sharply condemned this latest wave of Russian-Assad regime war crimes.  According to the EU’s foreign policy chief, Federica Mogherini, “The recent military escalation in Northwestern Syria, with air attacks and artillery shelling targeting schools and hospitals, including with the use of barrel bombs, is an unacceptable violation of international law… Far too many lives have been lost, far too much suffering has been inflicted to the Syrian people.”

And yet, for the past eight years in Syria, waging war against civilians — state terror designed to separate armed rebels from their civilian support base — has, in fact, become perfectly acceptable to the West in an operational context.  Only when the Syrian regime has added chemicals to other murder weapons it employs has anyone in the West — and that would be US President Donald J. Trump — reacted militarily.  Barrel bombs — large metal containers usually packed with metallic scrap and high explosive, pushed off the ramps of hovering helicopters — are used deliberately to terrorize and murder indiscriminately.  The person responsible for this outrage — Assad — denies to this day that barrel bombs (and chemical weaponry, for that matter) even exist in his medieval inventory.

During the administration of US President Barack Obama rhetorical reactions to these atrocities were often operatic in tone and melodrama. Like Mogherini, US officials in Washington and at the United Nations loudly deemed “unacceptable” the civilian-centric atrocities of Assad and his external supporters.  In fact, however, they accepted these crimes. Indeed, they promoted them by making it clear to all that nothing whatsoever stood behind florid words of outrage.  Vapid formulations to the effect of there being “no military solution to the Syrian crisis” and “the Security Council has once again failed to protect the Syrian people” served as a bright green light to Russian President Vladimir Putin to do whatever he wanted, not only in Syria but in Ukraine and elsewhere.  He suspected that the West was leaderless and spineless.  He was right.

For some observers, civilian slaughter in Syria — regrettable as it is, especially when images of dead, injured, and terrified children grab twenty minutes of media attention — is simply a humanitarian challenge that does not, as such, rise to the level of foreign policy and national security gravitas. Turks, Jordanians, Lebanese, and Germans might beg to differ, but a United States that admitted a grand total of sixty-eight Syrian refugees in 2018 can perhaps easily pigeonhole millions of refugees and internally displaced — fully half of Syria’s prewar population — as a matter to be handled by the United Nations and nongovernmental organizations. But by erasing the words “Never Again,” or by legalistically restricting their applicability to that rare subset of mass civilian slaughter known as genocide, a supine West is putting its own security at risk.

Violent Islamist extremism, for example, is the product of incompetent, illegitimate governance in many parts of the Muslim world.  Assad is the poster child for political illegitimacy.  His willingness to burn Syria to the ground to preserve his title has made him recruiter-in-chief for ISIS (ISIL, Daesh, IS, Islamic State) throughout the world.  Yes, the ISIS “physical caliphate” in Syria and Iraq has been erased, but thousands of fighters remain at large in those two countries, and God alone knows how many more damaged and deranged people there are around the world prepared to replicate the Easter Sunday massacres of Sri Lanka. Assad and his Iraqi counterpart at the time, Nouri al-Maliki, employed all their talents for incompetence, corruption, and political sectarianism to bring al Qaeda in Iraq back to life as ISIS. For Assad, civilians on the bullseye was the essential ingredient in his own, ISIS-conjuring, devil’s brew.

Assad has been using barrel bombs since 2012.  Future historians may well ask why the West — the United States in particular — permitted him to keep an air force (rotary and fixed wing) capable of terrorizing and killing civilians in such large numbers. Removing those murderous assets would require no innovations in military science.  For the Obama administration, not wishing to offend Iran and general skepticism about the worthiness and competence of US military power may prove to have been the reasons.  For the Trump administration, chemical weapons have emerged as a red line — a genuine red line — for a president who has openly communicated his desire to put Syria in his rear-view mirror.

Russia, Assad, and Iranian-commanded militias may well stop short of the kind of large aerial and ground operation that could stampede three million people toward Turkey.  Russian President Vladimir Putin would probably want to preserve the possibility of dislodging Turkey from NATO and making the country a significant buyer of Russian weaponry.  No doubt Assad would want to go all out in northwestern Syria, carried aloft by Russians and Iranians.  But the Kremlin has other fish to fry, so Assad may end up eating Idlib one bite at a time.

Rhetorically “unacceptable” mass murder and terrorizing civilians will, however, continue at varying levels of intensity in Syria.  Chemicals aside, the West has supinely accepted grotesque criminality in Syria; behavior that likely will be replicated elsewhere around the globe when thieving, incompetent dictators face popular uprisings.  There have been and will continue to be consequences for this abdication.  They will not be pretty, even for those who have done the abdication.

Frederic C. Hof is a distinguished senior fellow with the Atlantic Council’s Rafik Hariri Center. Follow him on Twitter @FredericHof.

Image: The devastation caused to Nabd Al-Hayat hospital by an airstrike in Hass, in Syria’s Idlib Province, is seen in this still image taken from a video on May 9. (ARAB24/Reuters TV via Reuters)